The employability of higher education graduates: are qualifications enough?

Reads 10,130
Elza Lourens, Magda Fourie-Malherbe, 21 November 2016
The transition from higher education to employment is a challenge, considering persistent graduate un- and underemployment. Qualifications are not enough. Graduates (should) develop a ‘workplace identity’ that improves their chances of being employed. An empirical study shows that achieving employability frequently involves several labour-market states in which personal attributes are utilised but also developed. Most graduates are not prepared for this arduous journey, something both higher education institutions and graduates should attend to.

Higher education is inextricably linked to the human resource needs of the national economy and is therefore experiencing pressure to produce employable graduates. The assumption that high-level skills are indispensable in a knowledge-based economy has led governments and other stakeholders to focus increasingly on this issue. Also, students (and parents) expect a return on their investment in that they should be able to secure appropriate employment after graduation. On the other hand, media headlines frequently refer to an increase in graduate under- and unemployment. This suggests that the transition from graduate to employee may be a difficult and complex process, influenced by a variety of factors in the labour market as well as the characteristics of graduates.

This article reports findings on the proposition that becoming an employable graduate is more than simply obtaining a degree, but rather a process of developing a ‘graduate identity’ which is presented to prospective employers by graduate job-seekers. This approach suggests that employability should be viewed not only as comprising skills and qualifications, but as the outcome of an individual’s ‘identity project’ during which other attributes play a role and are developed. This implies that a graduate’s journey to employment should be viewed from the perspective of an ‘emerging identity’.

The findings flow from an analysis of data on the experiences of first-time entrants to the labour market during their transition from graduate to employee. The findings of this paper have been based on a doctoral study (Lourens 2016) of the transition into first-time employment of 46 graduates of the 2010 cohort from the four universities[1] in the Western Cape. Thirty-one of the 46 graduates were first-generation students.

The ‘graduate-identity approach’ is based on the notion that graduates (should) develop a workplace identity which enables them to present themselves to possible employers in a way that improves their chances of being employed. A graduate identity is distinguished from a personal or social identity. In addition to knowledge of a particular discipline or profession, it comprises attributes such as having a sense of worth and self-esteem, confidence, a focus on personal development and lifelong learning, and an ability to transfer skills (Jackson 2014).

The graduate identity is seen as an emerging identity (Holmes 2013) because it is not a fixed identity acquired at graduation, but is subject to challenge, learning and change – and therefore it is malleable and even fragile. During interactions with possible employers or recruiters, for example, the graduate’s identity may be challenged. The graduate can accept (or alternatively resist) the challenge, learn from it and reshape his or her identity accordingly by employing the skills and attributes he or she has acquired. The development and emergence of the workplace identity of a graduate actually involves a journey through various starting, transitional and ending identities during which the person’s ‘identity attributes’ play an important role whilst they also develop and adapt to challenges.

The various identities in this journey are presented by Holmes (2000), in his model of emergent identity. Figure 1 shows various states or zones in which the individual can find himself or herself, depending on the interaction between the individual’s claims and their affirmation (or not) by others such as employers or fellow workers. 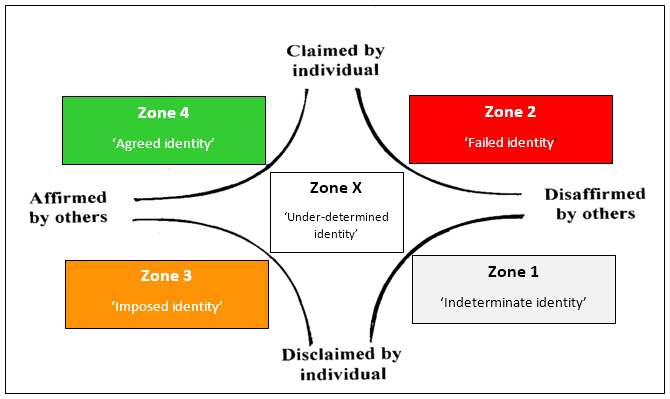 Movements between zones reflect (and are explained by) the affirmation or disaffirmation of a person’s claimed identity by, for example, employers or in various workplace experiences. This occurs in different situations:

Various identity trajectories can be identified in terms of the sequence in which a person moves between zones. Our empirical research identified such trajectories via semi-structured interviews with the 46 purposively selected graduates in order to explore and record their experiences of entering into first-time employment. By analysing their narratives regarding the transition to employment and negotiation of early careers, we were also able to uncover the role and development of the graduates’ attributes during their journeys.  Table 1 shows basic information on the respondents.

As an example we consider one participant’s developmental trajectory which includes all possible zones. Tanya started searching for employment in January after having graduated the previous December. Nothing came of her initial applications; in February, being desperate for an income, she returned to the university and registered for a master’s degree – a study bursary would provide the needed income. While already registered and studying, she received an email about a job option from a friend. She applied and was surprised when the application resulted in a permanent post. She continued her studies part-time. Subsequently, at the time of the interview, she was still in the same post but did not feel challenged anymore and was considering other options.

Figure 2. Tanya’s trajectory through the zones of graduate identity 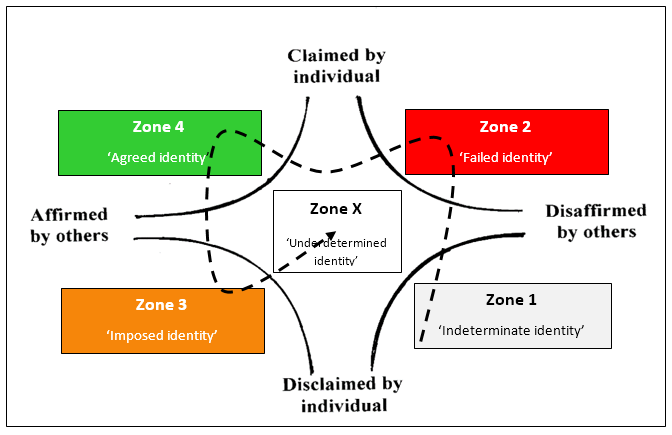 In terms of the zones, she experienced the following sequence, as shown in figure 2. Not being able to secure employment initially, Tanya experienced disaffirmation of her identity as a graduate worthy of employment (Zone 2). She chose to remain in a tentative position (Zone X) by not claiming a graduate identity; she rather registered as a postgraduate student. Thereafter, she gained an ‘agreed identity’ by securing graduate employment (Zone 4). After a few years in the post, she felt unchallenged and this resulted in an ‘imposed identity’ (Zone 3). She moved back to an ‘under-determined identity’ (Zone X) while considering what to do next. Her trajectory can thus be represented as: 1-X-2-X-X-4-X-3-X.

An analysis of the trajectories of the graduates

After five years in the labour market the average number of moves in the trajectories of the graduates was 9.5 with the shortest trajectory being five moves and the longest 18 moves. The trajectories reflected a sequence of stop-gap jobs and high mobility with equal reference to contract and permanent posts. As expected, the graduates’ trajectories for professional careers involved shorter and less complex journeys, since the paths to, and expectations about, professional jobs are more pre-determined. Their average number of moves between zones in these trajectories during the previous five years was only seven per trajectory (including all the transitional X-phases), putting graduates with occupation-specific training at a significant advantage (cf. Leuze 2010).

Within the 46 trajectories, certain patterns or typical trajectories emerged which reflected similar experiences or challenges the graduates had to negotiate. Twenty cases emerged where participants’ first attempts to secure employment were unsuccessful (-X-2-X-4). The duration to secure suitable employment in these cases varied between one month and a year. Graduates without financial support during this transition were particularly vulnerable and felt hopeless and despondent.

Five cases of graduates who were unable to obtain a graduate job at all were revealed (e.g. being stuck in 2-X-2-X-2-X). Five years after graduation the same five were still underemployed despite the fact that one had an advanced diploma in management and another a master’s degree in public administration. What was noticeable was that they all tended to limit the range of jobs, job sectors or geographical areas in which they applied. Reflecting their ‘failed’ identities, they did not believe that they were able to achieve more than those jobs.

Four participants resolved to further their studies after their failure to obtain employment; hence they remained in an under-determined identity zone (2-X-X). Three of them secured graduate jobs thereafter, while one continued to struggle to find employment. She eventually accepted a non-graduate post because she was desperate to earn an income. Even postgraduate qualifications did not guarantee suitable employment.

Almost without exception the move through the crossing point, Zone X, was supported by social networks. The quality of the secured employment was strongly associated with the quality of the networks available. This in turn was influenced by family background and social inheritance.

The graduate trajectories mostly represent complicated journeys pointing to the developmental nature of emerging identities. The narratives of respondents regarding their moves between the four zones highlighted how their ‘identity attributes’ were used but also how these developed and adapted during their journeys. It shows that graduates need to ‘re-identify’ or redefine themselves throughout the different zones and phases of their career progression to skilfully negotiate their career trajectories. They require self-confidence to face possible failed identities. Some of the respondents had to reflect on the implication of studies at a specific university and the value of postgraduate studies. Several participants ended up disillusioned or stagnated and had to rethink their career paths.

These experiences suggest that trajectories in the transition from graduate to employee are challenging and require skills and robustness. To persevere and to uphold a graduate identity during these processes and negotiations, including periods of disappointment and repositioning, a graduate needs strong self-esteem and confidence, as well as an appreciation of the importance of self-improvement and continued (lifelong) learning.

The findings also reveal the importance of being prepared for the transition. Although a few participants referred to the value of having confidence during the journey into employment, even more striking were the references to being ‘not ready’, ‘unprepared’ and ‘immature.’ These point to the need for such preparation, whether at home or school or during higher education studies.

The graduates’ transitions into employment presented as complex, multi-layered and unique journeys signifying the range of factors that affect this journey. The findings from this study confirm that, in terms of entry into the labour market, becoming an employable graduate involves not only obtaining a degree but rather a process of developing an augmented, versatile, well-rounded graduate identity in order to cope with the journey into employment.

We suggest that higher-education institutions should explicitly emphasise and support the development of such an identity and support the graduate during the transition into employment. Much effort is put into facilitating access to and success in higher education, particularly for first-generation students – but then the journey ends. More focused support is needed from both higher education institutions and employers during the graduate transition into first-time employment.

Decisions and choices made by the graduates themselves materially influenced their transitions. This study therefore also highlights the graduates’ responsibility to develop a graduate identity and prepare themselves adequately for the journey – and encourages graduates to foster realistic expectations of the transition into employment.