With 2013 being the centenary of the Land Act (No 27 of 1913), and with 2014 marking two decades since the end of apartheid, it is appropriate to assess the extent to which a legacy of discrimination that started generations ago has been addressed in the democratic era. It is not difficult to spot many remaining challenges: unemployment is high, economic inequality has increased and poverty, while declining, remains a persistent feature of many marginalized communities.

However, in one respect people’s lives have improved across the board – and in an equalising manner: respondents in surveys have reported a reduction in hunger. Van der Berg et al. (2008) show that there has been a clear downward trend in general indicators of hunger since 2002. This parallels a similar trend in the indicators of poverty (see Leibbrandt et al. on Econ3x3 2013). This trend, which has been ongoing (with a small hiccup during the financial crisis), is a success story which economic indicators easily overlook.

How is it that hunger levels could have declined amidst sluggish labour market conditions, particularly in rural, former homeland regions? This question relates to land reform policy: has this policy contributed to real improvements in the well-being of rural/homeland households? The redistribution of land and the need to redress the wrongs symbolized by 1913 remain emotive parts of the public discourse. At the same time, many critics note that land reform has not reversed the deterioration of agriculture (and, by inference, the inability of small-scale farmers to meet their own food requirements).

This article reports on research (Pienaar & Von Fintel 2013) that revisits the question of declining hunger (as one indicator of reduced poverty) from the points of view of space and land. We ask whether the former homelands – areas that originated from, inter alia, the geographic demarcations prescribed by the Land Act of 1913, and where extensive poverty and unemployment existed before and also after the transition – have shared in the benefits revealed by aggregate figures.

Background: the disappearance of small-scale agriculture?

The 1911 census indicated that the homeland areas were densely populated regions where black African farmers were concentrated prior to the introduction of institutionalized restraints on land ownership (notably the Glen Grey Act of 1894 and the far-reaching Land Act of 1913). By some accounts (Bundy 1979), these regions were self-sufficient, with black farmers successfully cultivating crops that even generated ‘export’ revenue in the form of the sale of produce to the Cape Colony. While this picture of relatively stable pre-Union black farming may appear foreign to an observer of modern South Africa, it is normal in many African countries where millions still depend on rural agriculture (even though this existence may be meagre: see Fields 2011). For instance, in Malawi, where official unemployment figures are below 10%, close to 25% of the working-age population is primarily engaged in small-scale farming.

The objective is not to paint a romantic picture of a thriving farming peasantry in Africa, but it is worth emphasising that, in the absence of sufficient formal-sector jobs, small-scale agriculture is a normal way of food provision in many African countries. In South Africa, despite severe unemployment, this option does not appear to exist (or to have been taken up) to the same extent that it apparently did a hundred years ago, before restrictive land and other policies were enacted. The question concerns the impact that this situation has had on hunger in the former homelands – the areas most directly associated with the original land policies – in the past decade.

Hunger in the former homelands in the past decade

We use data from the General Household Survey (GHS) of 2002-2004 and 2008-2010 to assess hunger patterns over time for households resident in the former homelands and non-homeland regions respectively.[1] In the GHS, households were asked to self-report on how often adults and children went hungry as a result of insufficient food in the preceding 12 months.[2]

Figure 1 shows a clear increase in the percentage of African households in which adults ‘never’ went hungry from 2002 onwards – in both the former homelands and non-homeland areas. (Results for child hunger are similar and not shown here.) Roughly speaking, this percentage increased from approximately 60% in 2002 to 80% in 2008/2010 (compare the blue parts of the vertical bars). This is the general picture highlighted by Van der Berg et al., noted above. 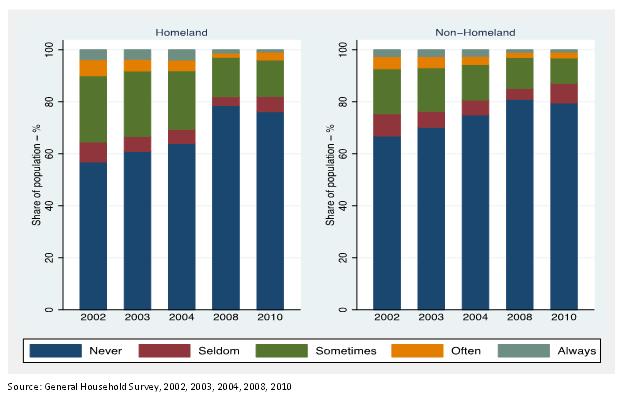 If we consider the percentage of households reporting that they have experienced hunger ‘always’ or ‘often’ – the top-most two (orange and grey) slices in the vertical bars in figure 1 – a difference emerges between the former homelands and the non-homelands. In 2002, this percentage was 10% for homeland households and 7.3% for non-homeland households. The gap of 2.7% indicates a significantly higher prevalence of hunger in the former homelands in 2002. (This is equally true for adult and child hunger.)

However, by 2008 only 2.8% of households in former homelands reported hunger – matching the reported 3% in non-homeland regions. This means that the ‘hunger gap’ that still existed in 2002 has been wiped out. Reported hunger declined for all regions, but hunger rates declined faster in former homeland regions. Thus homeland areas have caught up with non-homeland areas in a short space of time.[3]

This finding may be surprising, given much circumstantial and anecdotal evidence that former homeland regions are stuck in poverty and unemployment, with many people migrating from these areas. In particular, small-scale agriculture (and thus local food production) has apparently not recovered.

The question arises as to how the former homelands could have caught up with the rest of the country in just a few years since 2002 – and what role land reform and agriculture have played, given the strong association between the Land Act and the historical decline of rural/homeland agriculture and food production.

Has the abolition of the Land Act been instrumental in reducing hunger in the former homelands?

The post-1994 freedom to acquire land for farming appears important. Access to farm land is consistently greater over time in former homelands, relative to other regions. While large tracts still fall under tribal authorities, precluding direct ownership, GHS data show large reported increases in land ownership since 2002. However, our statistical analysis indicates that this trend has not been instrumental in reducing the hunger gap between the former homelands and non-homelands regions. This may be so because many households who report ownership actually still farm on tribal lands. Alternatively, many new landowners may be limited to small, unviable pieces of land, leaving them unable to produce sufficient food to make an impact on hunger levels.

Our evidence suggests that only farmers with larger tracts of land (and more sophisticated operations) and who aim to sell their crops in the marketplace are less exposed to hunger (compared to households that farm primarily for home consumption). Figures from the GHS suggest that these are households who also have access to substantial incomes from salaries that provide the household with capital to invest in the farm. However, it is unlikely that growth in this component could have been responsible for substantial increases in food production. Labour Force Surveys suggest that the number of employees in commercial farming has decreased substantially in all regions since 2002.

Specific formal land reform policies, instituted to support black farmers (following the abolition of the land acts), appear not to have had a major effect either. On the contrary, households that were beneficiaries of this policy have experienced greater levels of hunger relative to non-beneficiaries – it has not helped them to catch up with the rest of the population in terms of hunger levels (yet).

These factors suggest that increases in food production in the former homeland areas do not really explain why the former homelands have caught up with the rest of the country in terms of falling hunger levels. Land reform, in particular, has not had a noticeable effect.

Other government programmes, in particular the expansion of social grants, may have played a stronger role in reducing hunger. Figure 2 shows the composition of African households’ primary income sources over time. A distinctive feature of households in the former homelands is their stronger reliance on income and remittances from grants, coupled with much lower levels of income from salaries. This reflects weaker linkages to labour markets, and hence less insulation against hunger. 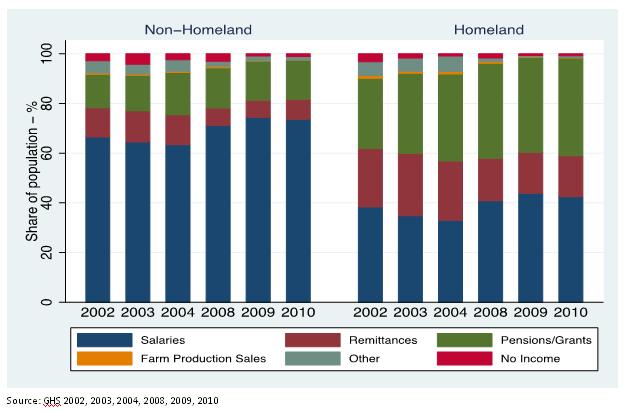 What then explains the relative success of former homeland areas in achieving low hunger levels? As demonstrated by Klasen & Woolard (2009), households in rural areas tend to form around pensioners who receive government grants; however, often these households are far from labour markets. While the latter may serve to increase hunger levels, living with pensioners with a secure pension (rather than with people in their prime) actually alleviates hunger. This constitutes an effective coping mechanism in the former homelands, where government assistance through the social security system is more widespread than in non-homeland areas.

From our statistical models, it appears that the composition of household income explains about half of the initial gap in hunger between the former homelands and the rest of South Africa. In particular, a lack of labour-market income in the former homelands explains a large part of the gap both before – and after – 2002. But, as far as the narrowing of the hunger gap after 2002 is concerned, the growth of social grant income stands out as the major explanation. Social grants, rather than land reform and resurgent agriculture, have been the main factor in reducing hunger levels in the former homelands. Since grant uptake has expanded faster in the former homelands regions than elsewhere, it has also relieved household hunger more rapidly there.

A century after the Land Act of 1913, the former homelands are still some of the poorest regions in South Africa. While land reform is one policy that seeks to address this long-term problem, it has had a limited effect in addressing the problem of hunger in households. Nevertheless, a remarkable convergence of the level of hunger in the former homelands and that in the rest of South Africa has been achieved since 2002. A large part of this can be attributed to the expansion of social grants that has been greater in homeland areas than in other regions (although it does not entirely explain the disappearance of the hunger gap).

While social grants have addressed hunger – one of the most urgent manifestations of poverty – most effectively, they may not be able to offer the same respite for more deeply rooted dimensions of poverty (and unemployment) in the long run. Our work highlights the importance of linkages to the labour market. Thus, other policies, such as those relating to employment and self-employment, as well as to land reform that in turn creates employment and leads to higher food production, are crucial.

[1] Linear probability models were built to explain why there was a gap in the first place. Households are identified as resident in the former homelands by magisterial district indicators up to 2004 and GIS link files from 2008. (With current information it is not possible to identify homelands status in the interim years.)

[2] The question does not address whether food intake was sufficiently nutritious and balanced for a healthy diet, but only whether households had enough food.

[3] This convergence has been distorted somewhat by the financial crisis: while it was associated with a small deterioration in hunger for both regions by 2010, it affected homeland areas somewhat more.