Reads 6,435
Pippa Green, Murray Leibbrandt, 23 November 2017
Several researchers in the REDI3x3 project focused on poverty in rural areas in the Eastern Cape, which contains two former apartheid homelands, the Ciskei and the Transkei. This article analyses the main messages of this research, highlighting the negative impact of poor land governance and uncertainty of tenure; knock-on effects are apparent in areas like Hout Bay and Marikana. [An edited version of this article appeared in Business Day on 10 November 2017. See references.]

The building in which land records are stored in Mount Frere, a district of the old Transkei, is an iron shack. Rickety wooden shelves are weighed down by piles of ledgers and fraying folders. At a recent policy conference on inclusive growth, Mike Kenyon, a researcher in the Eastern Cape, showed a 2011 picture (below) of this land records ‘office’ to illustrate land administration in the former homeland. Despite intense economic activity in livestock farming, construction, personal services and even marijuana cultivation, there are few effective institutions and many murky regulations around land use and planning. ‘Anyone who wants to do a development project gives up or does it below the radar’, he said. 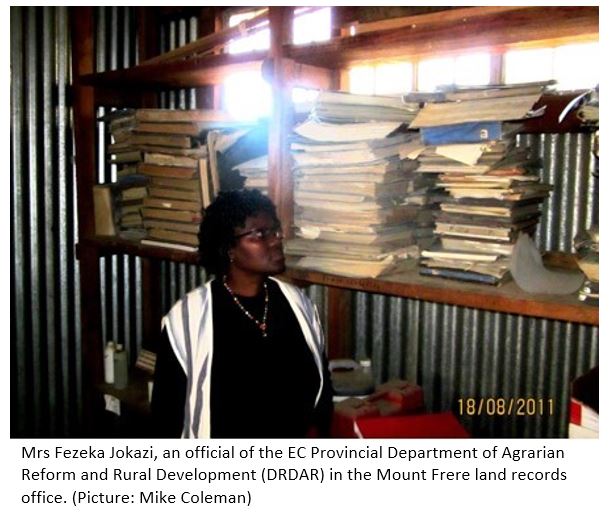 Kenyon is one of several researchers on the land question who have contributed to the Research Project on Employment, Income Distribution and Inclusive Growth (REDI3x3), a multi-year collaborative national research initiative, based at SALDRU at the University of Cape Town and supported by the National Treasury. The project, launched in 2012 and nearing completion, has interrogated the drivers and dynamics of persistent unemployment, income inequality and poverty.

Spatial inequality, not only within cities but between urban and rural areas, is pronounced. The former ‘homelands’, where about 40% of the population still live, are the poorest areas in the country. Research by Michael Noble and Wanga Zembe of the HSRC shows that 19 of the 20 poorest wards in the country are in the Eastern Cape or KwaZulu-Natal. Port St Johns, in the heart of the Wild Coast, is the poorest ward in the country. Nkandla, the site of President Zuma’s homestead that cost taxpayers some R240 million, is the 20th-poorest ward with 81% of people living below the poverty line.

Much of REDI3x3’s work in rural areas has focused on the Eastern Cape, which contains two former apartheid homelands, the Ciskei and the Transkei.  In these areas, uncertainty of tenure and poor land administration are major blocks to development.

In a recent Econ3x3 article, Rosalie Kingwill of the University of the Western Cape’s PLAAS, writes that a staggering two thirds of South Africans hold off-register land rights. In the wake of the 1994 transition a flurry of legislation to secure tenure for vulnerable users was passed. But, two decades into democracy ‘land rights, though more protected, are legally murkier than before’. Customary and informal rights are ‘relegated to the bare minimum of pre-emptive protection against eviction or land grabbing by the elite (and)...have not been translatable into legally recognised property rights that can be used to leverage economic benefits’, she adds.

Cases in the former Transkei suggest that land rights are secure ‘locally’, but not in a broader context. When developments arise, or mining companies apply for licenses, or government wants to invest in infrastructure, the processes are cloudy and inconsistent, or at times entirely absent. As Kingwell put it at a recent conference: ‘we have moved from administration with no rights, to rights with no administration’.

Kenyon says: ‘There is still a hodgepodge of legislation dealing with land rights: some of it goes back to colonial times and the Glen Grey Act. In other areas, particularly around the Pondoland coast, the system of PTOs (permission to occupy) has collapsed’. Although this coast has significant tourism potential, companies shy away from investing in major infrastructure because certainty of tenure is lacking (see Coleman & Kenyon on Econ3x3, July 2017).

Siyabu Manona, an independent researcher who has studied Willowvale in the Eastern Cape, says land administration is in total disarray. Certificates of occupation (PTOs) are the only evidence of rights. But in Willowvale, as in Mount Frere, the records ‘are kept in tin shacks; sooner or later this thing will come to bite us’. In the Wild Coast alone, he says, there are 160 illegal mining operations. Sand mining and forestry are destroying the environment; a major tourism attraction is being ‘plundered’. Where there is legislation, there is lackluster enforcement. The ambivalent role of traditional leaders complicates matters, says Manona: while we have one national framework for traditional leaders, there is no legislation that specifies their power in relation to land administration.

There is also little co-ordination between government departments and local authorities. In Willowvale, for instance, different government departments use different boundary delineations and even place names, so there are no common reference points for service or infrastructure delivery. This has implications for development projects in the area such as a 300 hectare macadamia project on communal land. Government invested more than R40 million in the project, which promised 300 jobs. But there is contestation between the notion of individual land rights and a community project. Now, ‘everyone is lined up to go to court to sort out the battle of whether it is individual tenure or communal tenure’, Manona says.

From the Eastern Cape to Hout Bay and Marikana

Largely, the old homelands play the same role as they did in the apartheid era: as labour-sending areas. Although more people are moving to urban areas from rural areas, our research shows that in many cases people still retain strong ties with their home villages. The HSRC’s Leslie Bank found that many families who live in the informal settlement of Imizamo Yethu in Hout Bay come from the Gatyana area in the old Transkei. They tend to invest money earned in urban areas back in rural areas – but not primarily in agriculture. Instead, they are improving their homes and homesteads: ‘Younger people in the city want to remain anchored in their rural homes’, he says. Siblings often pool money to improve their rural family homes. In many senses it is a new form of citizenship that straddles the urban-rural divide in ways that are still poorly understood. This ‘double-rootedness’, Bank says, is driven partly by the insecurity and indignity of shack life, but also by a desire to reconfirm a connection to the rural homestead as a place of identity, belonging, and future retirement. The result is a ‘de-agrarianism’ in rural areas combined with a lack of investment in an urban future.

In her research on the ‘perfect storm’ that led to the Marikana massacre, economist Neva Makgetla of TIPS (Trade and Industry Policy Strategies) identifies factors that exacerbated miners’ disaffection in the North West Platinum belt. Many Marikana workers actually came from eastern Pondoland. Makgetla points to a huge disjuncture between workers who were earning about double the median wage in mining, but were living in some of the most appalling conditions in the country. Wages and employment rose steadily from 2001 to 2011 as the platinum price increased. Small mining towns such as Rustenburg and Madibeng grew by more than 50%, almost as fast as urban areas in Gauteng. But housing and infrastructure did not keep pace. By 2011, one third of those in North West towns lived in informal settlements, compared with one fifth in Gauteng.

Most platinum workers earned too much to be eligible for RDP houses, but too little to get a loan to buy or rent a house. When they asked local chiefs for land to build better houses, the chiefs demurred because the miners were not ‘from there’. ‘This raises serious questions about citizenship’, Makgetla says. Moreover, it shows a lack of effective policies to help workers who earn above a median wage to secure housing. Added to this were dysfunctional and corrupt municipalities. Most miners, she says, did not vote in the local government elections because they felt alienated. But there are scant employment opportunities in Pondoland. Thus workers were faced with ‘choosing between places they hated and places where they couldn’t find work’, as Makgetla put it.

At a REDI3x3 policy conference, Kate Philip, who has worked on development strategies in the Wild Coast, said that agriculture in the region had declined and anyway there are huge market barriers for small-scale agricultural producers. ‘The vast majority of items in the consumption basket of poor people are manufactured in the urban economy by formal producers. And it is very effectively distributed to spaza shops even in the most remote areas.’

There also is little appetite for risk among investors, even in areas with high tourism potential. Land administration is a ‘killer’. ‘Even the DTI spent six months trying to sort out a land issue for a project it wanted to invest in’, said Philip.  Moreover, rural development is hamstrung not only by chaotic land administration but also by a chronic lack of services such as roads, sanitation and telecommunications. ‘If there are no toilets, there are no tourists’, Philip said at the conference.

She argues that the first steps to development should be to improve life chances for people who live in the traditional rural areas, for instance by focusing on child health and education as well as roads and sanitation. This could do more to boost rural development than any number of ‘flagship’ projects. Until something like that happens, the apartheid patterns of rural poverty, labour migrancy and urban slums will continue to dominate.