Reads 672
Vanessa Darsamo, Zunda Chisha, Georgina Bonet Arroyo, Corné van Walbeek, 14 December 2022
Taxes on cigarettes and tobacco in Mozambique are the among the lowest in the southern African region. This not only deprives the fiscus of potential revenue but also makes cigarettes more affordable. Affordability of cigarettes is a key measure of the effectiveness of tobacco taxes. If taxes - and retail prices - were significantly raised it would have beneficial effects not only in terms of revenue but also for health.

Cigarette affordability is an important measure of the effectiveness of tobacco taxes. According to the World Bank Group, tobacco prices in Mozambique increased by 27% in real (inflation-adjusted) terms between 2013 and 2016, while real per-capita GDP increased by 14% over the same period. This means that cigarette prices rose faster than the increase in income, making them less affordable. The current excise tax is adjusted by approximately 4% per annum in nominal terms in Mozambique. Between 2022 and 2023, the cigarette excise tax is predicted to increase by 19%, and then increase by approximately 4% per annum between 2023 and 2027[1] in nominal[2] terms.

A key measure of the efficacy of tobacco taxes is the change in cigarette affordability. The Tobaconomics cigarette tax scorecard, which keeps track of global cigarette tax developments, scored Mozambique well on the indicators of affordability and tax structure in 2020. It scored very poorly on the share of tax in the retail price, and on cigarette prices (which, for the Score Card, are expressed in international dollars and are relatively low in Mozambique compared with other African countries). (See Table 1). With the exception of Malawi, all neighbouring countries (Eswatini, South Africa, Zambia, and Zimbabwe) have cigarette prices and taxes much higher than Mozambique. An effective tax increase would result in increased excise revenue and reduced demand for cigarettes.

Moreover, cigarette prices in Mozambique are much lower than in the neighbouring countries, as Table 1 shows.

Table 1: Excise and total tax share in price of a pack of the most sold brand (MSB) of cigarettes, 2020, selected SADC countries

We used the Tobacco Excise Tax Simulation Model (TETSiM), designed by the Research Unit on the Economics of Excisable Products (REEP), to simulate the impact of different excise tax changes on cigarette tax shares (expressed as a percentage of the selling price), cigarette demand, cigarette tax revenue, and the adult smoking prevalence rate, between 2023 and 2027, using 2022 cigarette excise tax rates as the baseline. We present our results in constant 2022 prices.

Two crucially important inputs are the price and income elasticities of demand. The price elasticity of demand quantifies the relationship between a change in the real (i.e. inflation-adjusted) price and demand. Based on a large international literature, we used price elasticities that range from -0.6 to -0.8, implying that a 10% increase in the price of cigarettes results in a fall in demand by between 6% and 8%.

In order to simulate how an increase in the cigarette excise tax share compares with those of other countries in the SADC region, and its effect on the current cigarette prevalence rate, two scenarios were considered. In the first scenario, the status quo scenario, we assume that the adjustments to the cigarette excise taxes remain as stipulated in the current cigarette excise tax schedule for 2022 to 2027, that is, increase by 19% between 2022 and 2023, and then increase by approximately 4% per annum between 2023 and 2027. We compare this scenario with a scenario where Mozambique would follow the WHO FCTC Article 6 guidelines, which recommend adjusting the specific excise tax annually in line with both inflation and income growth. This scenario proposes a 30% annual increase to the current excise tax rate over and above the recommended annual inflationary and income adjustments.  We recommend this additional 30% annual increase in order to account for the current low cigarette excise taxes in Mozambique and increase the excise tax and total tax shares of the selling price. We refer to this simulation as Scenario 2. We used GDP per capita as a proxy for income. In both scenarios, we assume an over-shift[4] of the tax by between 12% and 15%[5] as the industry in Mozambique is relatively concentrated with three multinational tobacco companies, of which one, British American Tobacco, accounts for over 90% of the market. In cases of  highly concentrated markets, industries are likely to over-shift the tax.

Figure 1: Change in the retail selling price of the most sold brand (MSB) in real MZN 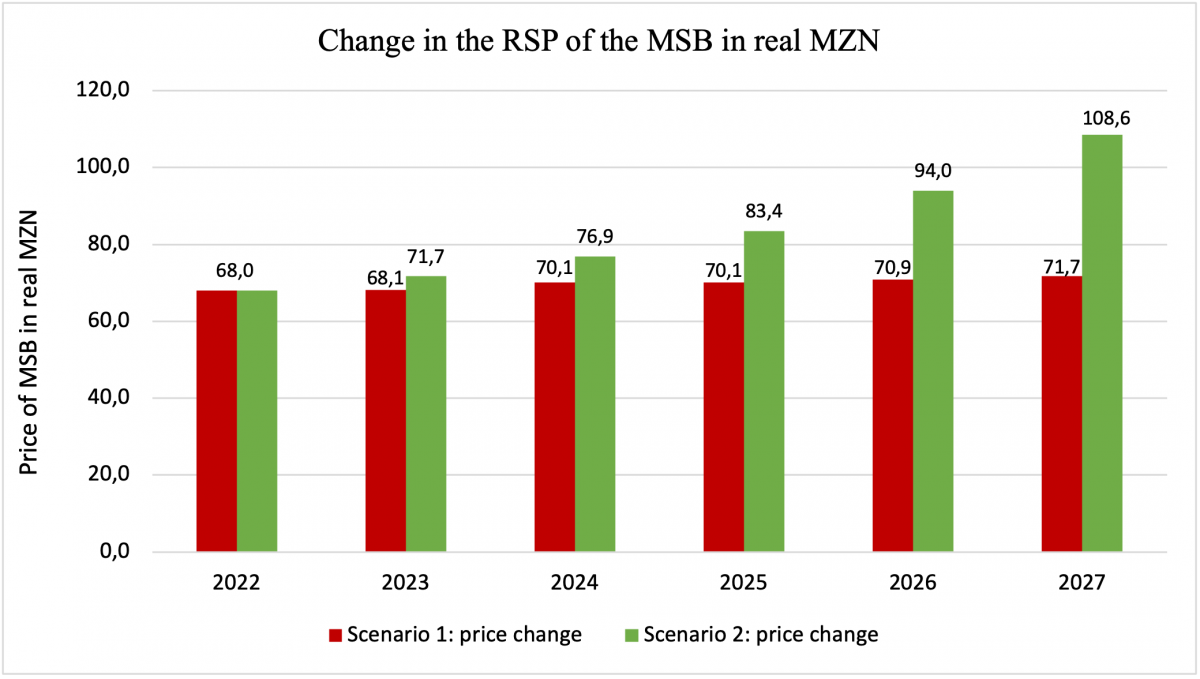 Figure 2: The excise and other tax share of the retail price of the most sold brand 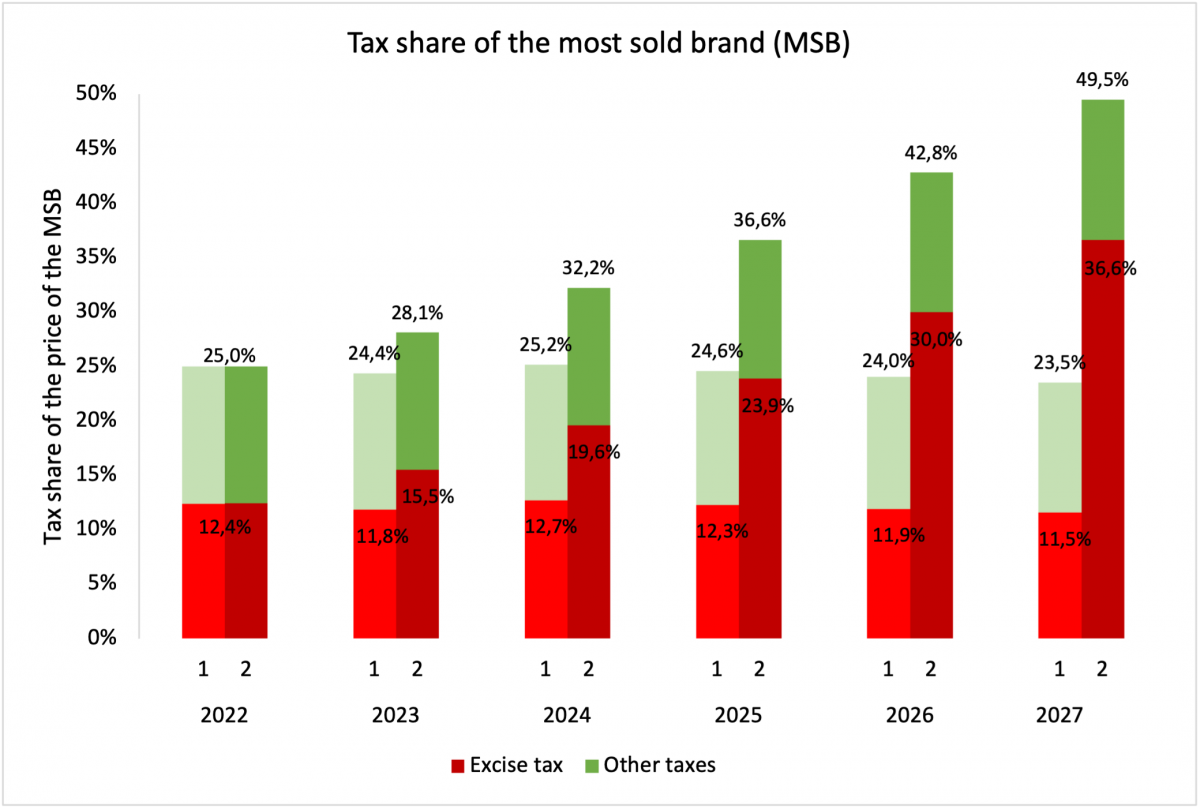 Figure 3: Change in affordability  of the most sold brand 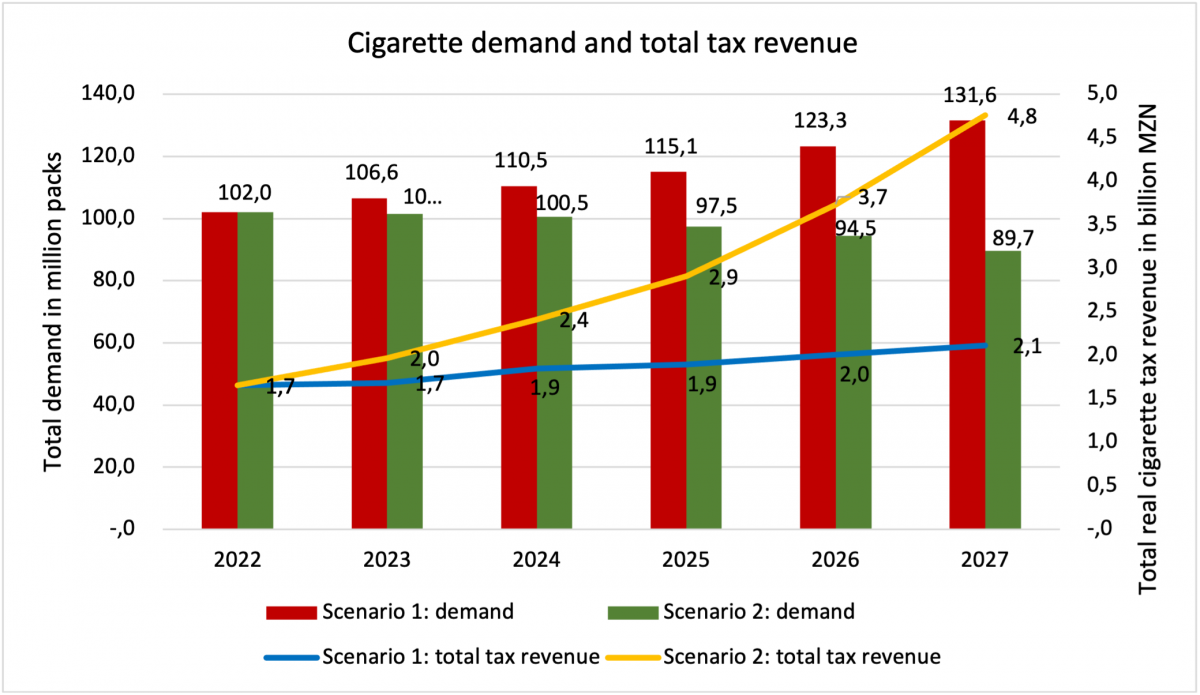 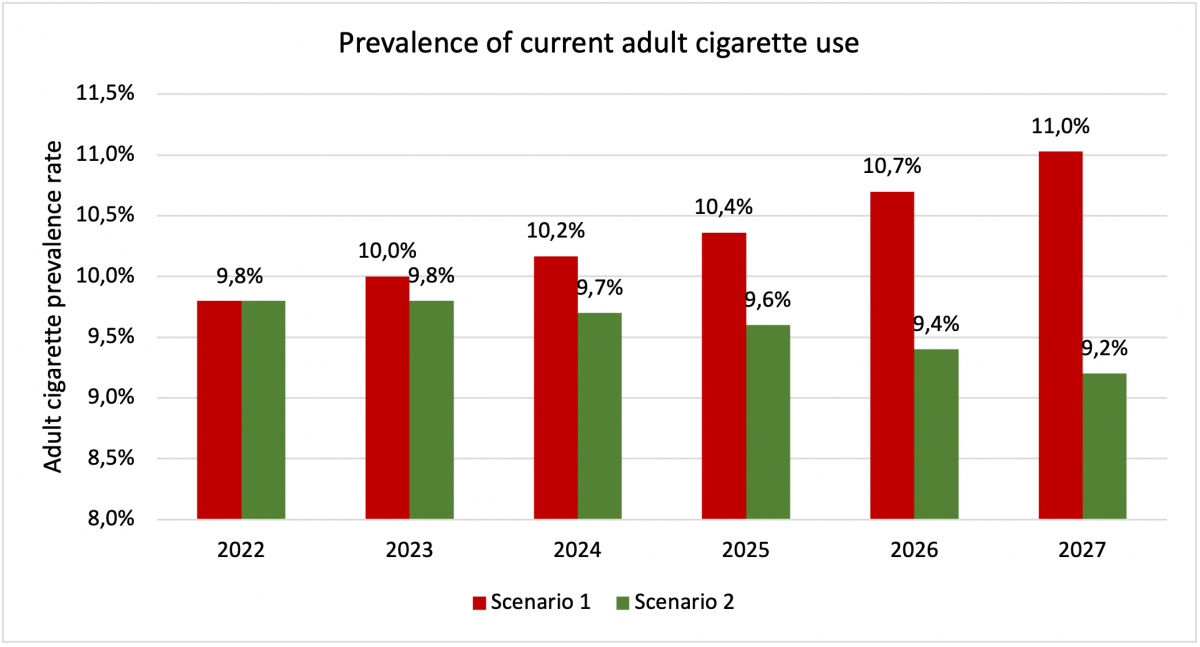 We recommend that the Mozambican government adjust the cigarette excise tax annually by at least 30% over and above the sum of the GDP growth rate and inflation rate. This will result in:

Furthermore, a more aggressive excise tax will result in a decline in cigarette smoking prevalence, and the associated harms of tobacco use.

[1] Based on personal communication between REEP and WHO Mozambique

[2] An increase that does not take inflation into account.

[3] A currency conversion to equalise the purchasing power of the different currencies, by eliminating the differences in price levels between these countries.

[4] An over-shift is when the industry increases the retail price by more than the tax increase.

[5]  We used an over-shift of 15% for the imported, and popular segments, 12% for the economic segment and 25% for illicit segment in both scenarios.