Reads 11,333
Duncan Pieterse, 22 April 2015
Although many children are maltreated at home, we know little about the effects of abuse on long-term child development. This article explores the association between different ways in which children are maltreated and two educational outcomes (numeracy test scores and dropout). Children who are physically maltreated (e.g. hit hard) regularly suffer severe adverse consequences in terms of their numeracy test scores and probability of dropout – and hence their chances of employment and higher earnings.

Many South African children are maltreated in the home in some way, but we know little about the long-term effects of abuse on child development. One in two young South Africans indicates that family members often lose their tempers with each other (Leoschut, 2009), and one in four indicates that he or she is often beaten at home as a punishment for his or her misdemeanours (Leoschut and Burton, 2006). Two recent studies (Walker et al. 2007; 2011) identify exposure to violence as a major risk factor for long-term child development in developing countries.

To assess the long-term developmental impact of violence against children, we explore the effect of the maltreatment of children on two measures of educational outcomes: numeracy test scores and drop-out rates at high school. We use four measures of childhood maltreatment at home: being hit hard; being pushed; having a fear of being hurt; and being put down by adults.

We present evidence of the relationship between various measures of maltreatment during childhood and educational outcomes and quantify the size of the effect based on data from the Cape Area Panel Study (see Pieterse 2014).[1]

How does maltreatment during childhood affect educational outcomes?

Parents (and other caregivers) are the main environmental influences during childhood (Shonkoff & Phillips, 2000). Because children are especially sensitive to positive and negative influences, negative events (such as regularly being beaten) during early childhood can cause permanent biological changes (for example, to the brain) in a manner that influences the development of cognitive and non-cognitive skills (Knudsen et al., 2006). (Cognitive skills refer to intelligence and non-cognitive skills include patience, self-control, temperament, motivation and time preference.)

We used data from the Cape Area Panel Study (CAPS), a longitudinal study of the lives of young people in Cape Town. From August to December 2002, survey interviewers collected relevant data on child maltreatment, households, school, work, childbearing and sexual behaviour from 4 747 randomly selected young people aged 14–22 years. Two measures of educational outcomes of CAPS are used here: (i) scores from numeracy tests and (ii) the number of years of schooling (to determine dropouts from high school).

We use four measures of childhood maltreatment in the home: (i) being hit hard; (ii) being pushed; (iii) having a fear of being hurt and (iv) being put down by the adults. These measures are based on questions put to young people about the violence they experienced at home from their parents during childhood. For example, for the first measure they were asked: ‘How often did a parent, stepparent, or adult living in your home hit you so hard that you had marks or were injured?’ Available answers were: never, once or twice, sometimes, often and very often.[3] (This type of question is used internationally, for example, by the Centre for Disease Control in the United States and the World Health Organisation.) Below we show how the incidence of childhood maltreatment varies by race and gender:

A higher proportion of the coloured youth have been hit hard, pushed and put down by adults (i.e. being undermined psychologically) compared with the other groups; and a higher proportion of girls were maltreated than boys. (The latter may reflect differences in the ways in which boys and girls report the violence and is consistent with national trends on family violence such as the National Youth Victimisation Study).

The question is whether the incidence of maltreatment at home has any effect on the school performance of the youth. The data in table 2 provide reference points in this regard:

Numeracy test scores exhibit clear racial differences and the performance of female youth is lower than males’ performance. The dropout measure also shows clear differences across race and gender: black youth have the highest dropout rate (53%), followed by coloured (49%) and white (3%) youth, and dropout rates are higher for males.

Given these patterns, graphical analysis can link educational outcomes and maltreatment. Figure 1 shows the numeracy test scores for all the black and coloured youth in the sample, depending on whether they were hit hard or not. The curves show the distribution (i.e. frequency) of test scores around the mean for different groups of youth, as indicated.

Figure 1: Distribution of numeracy test scores by
race and maltreatment (being hit hard) 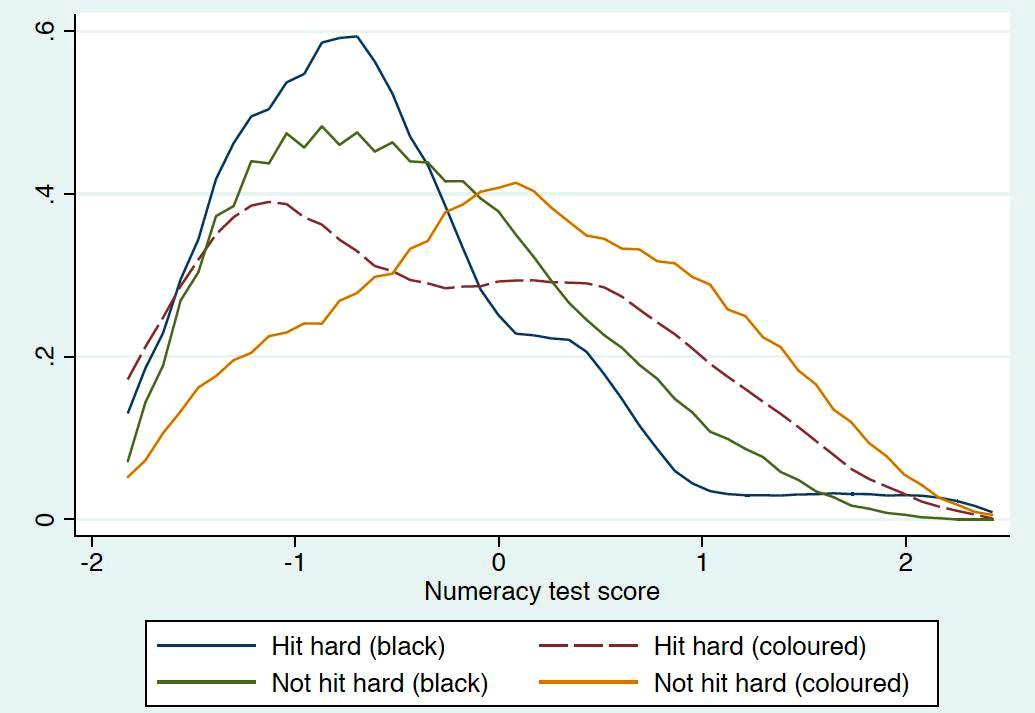 If a curve lies to the left of another, it represents lower numeracy test scores. The graph reveals several interesting findings.

First, the test scores exhibit large racial differences: for example, for those who were not hit hard, the average scores of black youth (green line) are much lower (and concentrated around a lower score) than their coloured counterparts (yellow line).

Thirdly, in the Cape area, maltreatment during childhood (as measured by being hit hard) has a bigger impact on the numeracy test scores of the coloured youth than for the black youth – the entire dashed distribution lies substantially to the left of the yellow distribution, whereas only the right-hand portion of the blue curve is to the left of the green curve.

Similar effects are present for other forms of maltreatment and for the dropout measure of performance at school. It is clear then that physical and other maltreatment have a significantly negative effect on educational outcomes.

What is the specific impact of maltreatment during childhood on educational outcomes?

Regression analysis enables one to isolate and quantify the estimated effect of violence as such on numeracy and dropping out of school. The analysis explains these educational variables by relating them to a measure of violence as well as other ‘control’ variables such as the child’s gender, the household’s income, the mother’s education level, the neighbourhood where the household lives, and so forth.

It appears that ‘being hit hard’ is the violence variable with the largest impact on educational performance:

Secondly, being hit hard or pushed increases the probability of dropout by 0.15 (or 15 percentage points). The average dropout rate among those who were not hit hard is about 43% and the dropout rate for those who have been hit hard almost 60%. Smaller estimated effects were found for a fear of being hurt (0.08) and pushed (0.06). (As before, there are neighbourhood effects: living in Steenberg (0.21), Atlantis (0.15) and Nyanga (0.11) is associated with large increases in the probability of dropout.)

These findings confirm that there are links between childhood maltreatment and numeracy test scores and the probability of dropping out of school that are not simply the result of household or family characteristics.[4]

What are the long-term consequences of maltreatment?

On average, in the geographical area studied, 4 out of every 10 young adults who are not maltreated drop out of high school at some point. In contrast, for those who were hit hard at home, 6 out of every 10 young adults do not complete high school. This has significant implications, given the significant employment and earnings premiums that result from completing high school. Using nationally representative data, Branson et al. (2013; see also on Econ3x3) show that, at the age of 25 years, the cohort of those who had completed high school with the poorest labour market outcomes still earned 40% more and were 25% more likely to be employed than those who had dropped out in the last two years of high school.

In addition, it is clear that the type of childhood maltreatment in the home matters: being hit hard – the most severe form of physical maltreatment – is consistently associated with larger adverse effects on educational outcomes (and longer-term prospects) compared to other forms of maltreatment.

What interventions are available to improve the outcomes of children?

The intervention literature (Olds et al. 1997) suggests that a programme of prenatal and early childhood home visits by nurses can reduce maltreatment by low-income, unmarried mothers for up to 15 years after the birth of the first child. Analysis by the Washington State Institute for Public Policy indicates that the financial value of the net benefits of this programme is higher than for other child welfare public policies.

A similar programme is currently being tested in Cape Town. Researchers have conducted a randomised control trial that consisted of a home-based intervention by community health care workers to promote mothers’ engagement in sensitive and responsive interactions with their infants (Tomlinson et al. 2005). In a follow-up to that trial, researchers are currently assessing child cognitive functioning and school achievement to determine whether the initial intervention has had a long-term impact on skills formation. This and other assessments will help determine which policy interventions have the greatest potential to address the long-term adverse effect of maltreatment at home on educational outcomes.

[1] The views expressed in this paper do not necessarily represent the views of the National Treasury.

[2] Economists have formalised the implications of these findings for educational outcomes in terms of the human skill formation model (see, for example, Cunha & Heckman, 2007).

[4] For some types of maltreatment, the negative effects on educational outcomes remain when we conduct household and sibling fixed-effect regressions. These are techniques that allow us to conduct our analysis for siblings or young adults who live in the same household, thereby removing fixed family and household characteristics (such as parenting style) that may bias the results.