Enforcement and compliance: the case of minimum wages and mandatory contracts for domestic workers

Reads 16,467
Taryn Dinkelman, Vimal Ranchhod, Clare Hofmeyr, 14 April 2014
What happens when a previously unregulated labour market is regulated? After the introduction of minimum wages and mandatory employment contracts for domestic workers, wages increased markedly while neither employment nor hours worked declined; some formalisation of working conditions also occurred. All these occurred despite a lack of monitoring and enforcement, suggesting that such actions (often costly) are not essential for regulation to have a significant impact on informal employment conditions, at least in the short run.

Given South Africa’s small formal labour market and high unemployment, it is important to know whether the regulation of an informal employment sector could have a real impact on the earnings and the conditions of employment within such a segment, especially when there is weak monitoring and enforcement.

With reference to the introduction of minimum wages and mandatory employment contracts for domestic workers, which became effective in 2002-2003, we look at the effects of these regulations in this sector (see Dinkelman & Ranchhod 2012). We find that, despite only partial compliance amongst employers and a very weak monitoring and penalty regime, the average hourly wage for domestic workers increased substantially across the board. We also see a rise in monthly earnings, explained by the fact that employers did not respond to the increased wage by reducing the working hours or dismissing employees. Over and above this, the proportion of domestic workers with a formal employment contract, unemployment insurance contributions and pension contributions rose substantially.

These findings suggest that labour market legislation of this kind could aid the formalisation of working conditions and improve the earnings of workers in a large informal labour market. Many employers reacted positively even in the absence of monitoring and penalties (at least in the short run).

Informal employment in South Africa: the case of domestic workers

The domestic worker sector in South Africa is a major employer of women. When the minimum wage was enacted, 18% of all women worked as domestic workers; of these, 79% were employed full time (defined as 28 hours or more per week). The vast majority were poorly-educated African and coloured women with, on average, 6 to 7 years of schooling.

At the time of the new law, wages in this sector typically were low: domestic workers were earning half the wages of women employed in other low-skilled occupations or who were self-employed. As a rule, employers would set wages unilaterally – domestic workers had no formal mechanism to negotiate better pay or working conditions. Furthermore, the majority of employers rarely adhered to the Basic Conditions of Employment Act, passed in 1997, which set standards for overtime pay and fair dismissal procedures (among others). For example, in 2001 only 10% of domestic workers had a contract, as compared to 55% of elementary-occupation workers. Accordingly, this sector was a good candidate for the introduction of labour laws.

The introduction of a minimum wage for domestic workers

The first minimum-wage law for domestic workers took effect in November 2002. Set by the Department of Labour and the government-appointed Employment Conditions Commission (ECC), the aim of the minimum wage was to ‘improve the livelihoods of those worst off’ and ‘retain jobs’.

The law applied to domestic workers and gardeners employed by private home owners. It entitled workers to a stipulated minimum wage and an annual increase of 8%. Effective November 2002, the hourly minimum wage for full-time work in urban areas was set at R4.10 and the part-time wage at R4.51 (where part-time work is defined as fewer than 28 hours per week).[1]

In addition, formal employment contracts were mandated by the ECC’s sectoral determination for domestic workers, and from 1 April 2003 employers were required to register their domestic workers with the Department of Labour in order to contribute to the Unemployment Insurance Fund (UIF).

The effects of the law: a statistical analysis

While the initial minimum wage may seem low, it introduced a substantial increase relative to wages at the time – an increase greater than is usual when a wage floor is introduced. In fact, the urban minimum wage was 1.5 times the median monthly earnings of urban domestic workers in 2002. This meant that full compliance with the law would lead to a huge increase in the total wages to be paid to the majority of domestic workers. Not surprisingly, this raised the concern that employers might respond by reducing the working hours of their domestic workers or by dismissing them.

To investigate the effects of the law on wages and employment, data from both before and after the introduction of the law were analysed. The ‘pre-law’ data came from the September 2001, March 2002 and September 2002 Labour Force Surveys (LFS). The law came into effect in November 2002; so the ‘post-law’ data came from the LFSs of March 2003, September 2003 and March 2004. In total, information on 60 000 to 70 000 individuals from 30 000 households was available. Our analysis considered only African and Coloured women aged 20-59. We excluded women who owned a business on the side or who had education beyond matric, as well as gardeners, part-time workers and rural workers.

To ensure that the observed changes in wages were not the result of other factors (e.g. general economic shocks or different wage trends in different parts of the country), several rigorous checks were run. It was concluded that the improvements in wages and employment conditions were almost certainly due to the law and not as a result of other, simultaneous changes in the economy (see Dinkelman & Ranchhod 2012: 37-39).

The impact of the law on hourly wages and monthly earnings

First, the introduction of the minimum wage appears to have had an almost immediate positive effect on the average hourly wage of domestic workers. The rise in hourly wages was substantial, at approximately 20%. The pre-law average wage was R3.67, rising to R4.37, which was actually above the stipulated minimum of R4.10 (for full-time domestic workers in urban areas).

Secondly, there was no significant reduction in the number of hours worked. This was reflected in the fact that average monthly earnings also rose by approximately 20%. Moreover, the probability of being employed as a domestic worker (for somebody in the labour force) did not decline, indicating that the law had no negative impact on the employment prospects of domestic workers.

The graphs below show the distribution of hourly wages and monthly income over the period September 2001 – March 2004. The two vertical lines show the minimum hourly wage and the associated monthly earnings for a domestic worker who is employed full time in an urban area. The curves show that, before the law, the highest concentration of wages paid by employers – the peak of each curve – was considerably below the minimum wage. After the law, the highest concentration was exactly at, or just above, the minimum wage (compare the solid red and purple lines to the others). Indeed, there is a noticeable shift to the right of the entire distribution of both wages and earnings for September 2003 and March 2004. This indicates a substantial increase in the general pattern of wages and earnings, across the board, for domestic workers after the introduction of the minimum-wage law. (Note that there is no shift in the distribution for March 2003, suggesting a lag of a few months between the implementation of the law and the response of employers.) 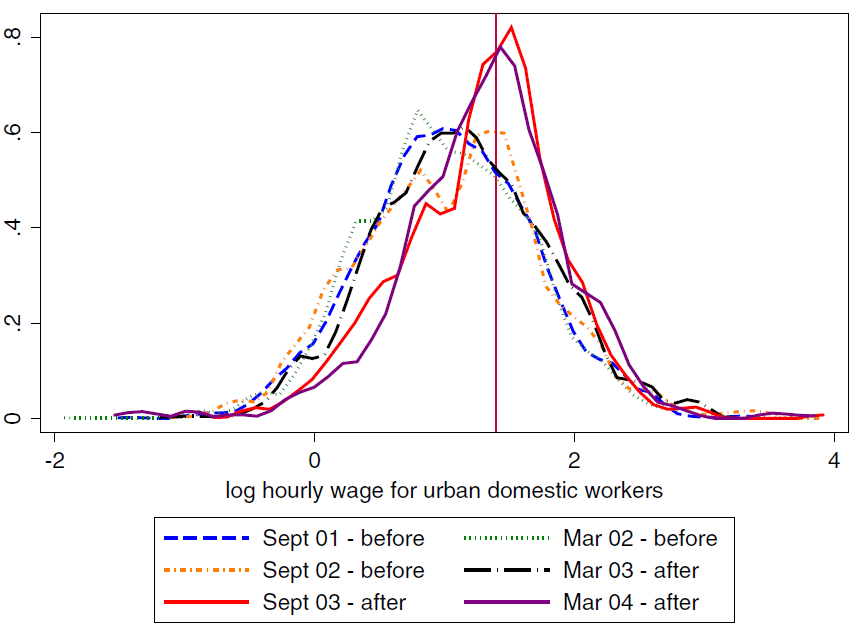 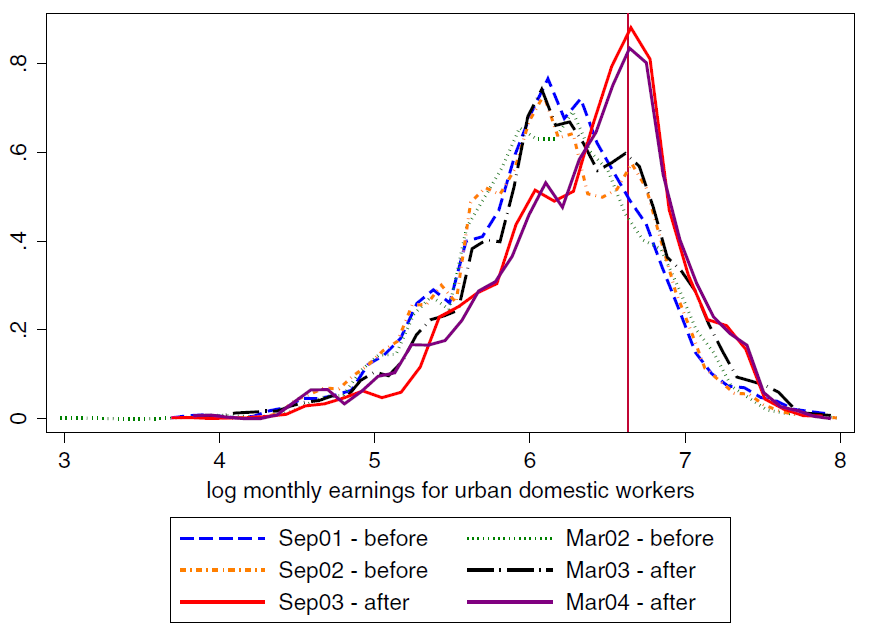 The impact on working conditions

The new law also stipulated that domestic workers should be registered with the Department of Labour, that employers should contribute to the UIF, and that workers should have formal employment contracts. The law seems to have been reasonably effective here too.

As shown in Table 1, the proportions of workers covered by contracts and UIF contributions (i.e. the ‘coverage rates’) show a large increase in the 18 months following November 2002. Before the enactment of the law, 10% had employment contracts and 2% were covered by UIF. After the law had been implemented, the fraction of workers with a contract rose by almost 20 percentage points, as did the fraction with UIF contributions. These represent dramatic and statistically significant improvements in the conditions of work (although from a low base and still with low totals).

Pension contributions were not mandated by the new labour regulations. However, the coverage rate for this component rose from 3% to 10%. This suggests that the law might have acted as a catalyst for employers to start providing better conditions of employment in general.

Did inspections and enforcement bring about the compliance?

It is possible that these results might have been due to vigorous inspection and penalties for non-compliant employers. However, it appears that the government devoted relatively few resources to enforcing the law. No inspections were carried out until August 2003, when only 1600 households in five provinces were earmarked for inspection. At the majority of Labour Centres across the country, annual inspections reached at most a couple of hundred households.

In addition, there were no officially documented rules about penalties or back pay at the time when the law was implemented. And, while an initial inspection found only 25% of the 1600 households to be fully compliant with the law, a search of newspaper archives did not reveal any report of fines or other sentences for non-compliant employers. It appears that the general monitoring and enforcement regime was weak and that employers could reasonably assume that there would be no cost to non-compliance.

The introduction of a minimum wage for domestic workers in 2002 had large positive effects that are statistically significant. Despite only partial compliance in the first couple of years, a substantial increase in hourly wages occurred across the board. Employers neither laid off workers nor reduced their working hours in response to the law.

Interestingly, the wage improvements occurred despite approximately 70% of domestic workers’ remaining informally employed – i.e. working without a formal employment contract. Higher wages and earnings occurred even though formalisation as such was patchy. Nevertheless, significant increases occurred in the proportion of employees with a contract, UIF contributions and even a pension.

What is most notable is that employers responded positively to the new laws despite very limited monitoring and enforcement. It is plausible that the announcement of a wage floor defined, or re-defined, what the fair wage was and set voluntary employer responses in motion.

On the whole, it appears that intensive (and therefore costly) monitoring and enforcement are not essential for new labour legislation to have a significant impact on an informal employment sector, such as domestic work, at least in the short run. (Our study does not tell us how employers might respond to sustained increases in minimum-wage floors over time.)

Editor’s note: See the article of Bhorat & Mayet in Econ3x3 (June 2013) for evidence on wage trends and compliance rates for later years (up to 2007).

[1] The law also allowed employers to deduct up to 10% of the total salary if accommodation was provided.

[2] Surprisingly, the spread (or variance) of wages and earnings increased after the law had been passed. Typically a minimum wage narrows the range of wages as employers adjust their remuneration closer to the legislated minimum. There are two possible reasons for an increase in the dispersion of wages. Some employers at the lower end may fail to respond to the law at all. On the other hand, some employers at the top end might further increase their wages even though they already complied with the law. Of course, both may occur at the same time.