Reads 13,564
Nimrod Zalk, 17 September 2019
South Africa has a major but overlooked opportunity to expand the production of high-value agricultural products that are both labour-intensive and export-oriented. There is an extensive and growing global demand for these products. Various supply side constraints must be addressed, such as how land is used; public investment in irrigation, agricultural inputs and R&D; development finance; and logistical costs and quality. Around 300 000 jobs could be created directly and indirectly, primarily benefitting the poorest: rural women in former homelands

As South Africa searches for interventions that could generate large-scale employment, effect structural and racial transformation and grow exports, a fundamental opportunity to realise these objectives is ’hiding in plain sight’. There is a large-scale, but overlooked, opportunity to promote the growth of a range of high-value agricultural products that are both labour-intensive and export-oriented.

The decline and subsequent stagnation in agricultural employment must be understood in their historical context. Under apartheid, the confluence of a drive for food self-sufficiency and the disproportionate electoral importance of white commercial farmers to the National Party meant they received substantial direct and indirect state support, particularly for the farming of cereal field crops and livestock (Feinstein 2005; Liebenberg 2013). These products have a high land-to-employment ratio and have been amenable to significant mechanisation.

The 1990s saw the accelerated deregulation of agriculture. Tariffs were cut, marketing boards dismantled, subsidies withdrawn and public agricultural research funding slashed (Visser & Ferrer 2015). Agricultural employment fell dramatically. Although notoriously difficult to measure precisely, agricultural employment is estimated to have plunged from 1.3m in 1986 to 0.8m by 2009/2010 (Greyling et al. 2015). This has exacerbated the unemployment crisis, which is felt most deeply by black women in rural former homelands, particularly those without secondary education who have either lost or been unable to find wage employment (Cramer & Sender 2015). Real investment in agriculture has flatlined rather than grown in real terms since the mid-1980s, while South Africa's share of world agricultural exports has stagnated at under 1%.

Overall agricultural employment appears to have stabilised over recent years. Between 2015 and 2018, the recorded number of workers employed in the sector has averaged at 860 000 (Statistics South Africa n.d.). However, as discussed below, there are significant variations in job-creation performance in the different agricultural sub-sectors.

The pre-eminent reason advanced for the decline of agricultural employment over the 1990s and early 2000s has been the strengthening of legal rights afforded both farm dwellers and agricultural workers over this period (e.g. Bhorat et al. 2014; Visser & Ferrer 2015). However, the structural character – particularly labour intensity, value-added and export potential – of different kinds of agricultural products has largely been overlooked. The right-hand side of Table 1 reflects the continued dominance of land-intensive (and generally capital-intensive) field crops and livestock in the past two decades. In 2010/11 almost 10 million hectares of cultivated land produced commodities employing 1 or fewer people per hectare. Indeed, of these, 9 million hectares employ (in weighted average terms) only 0.02 workers per hectare: dairy, white maize, poultry, yellow maize, sunflower, beef, wheat, soybeans, eggs, pork, sheep meat, barley, wool and canola. As de jure tenants’ and workers’ rights were strengthened during the 1990s and 2000s, commercial farmers were able to respond (sometimes pre-emptively) by intensifying farm mechanisation or by simply ignoring the legislation formally intended to protect farm workers (Devereux 2019). 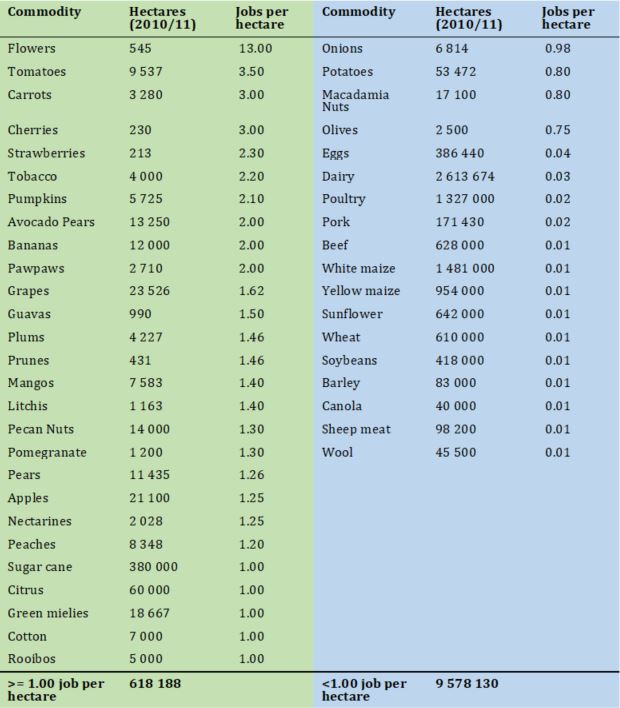 Conversely, the left-hand side of Table 1 shows that 0.6 million hectares of land was used to produce commodities employing one or more people per hectare. These products are 80 times or more labour intensive than most field crops and livestock. They mostly comprise deciduous and citrus fruit, fresh vegetables, berries and nuts. This factor rises to 160 times for the most labour-intensive products: papaws, bananas, avocados, pumpkins, tobacco, strawberries, cherries, tomatoes and flowers.

The Bureau for Food and Agricultural Policy (BFAP) estimates that around 200 000 jobs could be created mainly through expanding the production of the export-oriented high-value products in the left-hand column of Table 1. This would expand the current agricultural employment by almost 25%. The largest tracts of potentially arable land lie in the former homeland areas – where unemployment and poverty are most endemic – particularly the Eastern Cape, Limpopo, the Northwest and parts of KwaZulu-Natal. The multiplier effect on up- and downstream manufacturing and service industries could create an additional 100 000 jobs.

The Fourth Industrial Revolution in high-value agriculture: targeted insertion of technology that unlocks jobs and exports

Whereas agriculture is sometimes perceived to be a ‘backward’ sector lacking in technological dynamism, modern high-value agriculture involves the acquisition of sophisticated capabilities more commonly associated with increasing returns, as found in manufacturing. Cramer and Sender (2019) describe the process of growing and delivering high‑quality fresh produce onto supermarket shelves on the other side of the world as the ‘industrialisation of freshness’. Indeed, horticulture embodies a number of technologies associated with the ‘Fourth Industrial Revolution.’ This includes ongoing research and intellectual property embodied in continual improvements to plant varietals and sophisticated irrigation, as well as information technology systems to manage the cold chain from farm to supermarket shelf.

However, rather than displacing labour, the targeted insertion of high skills and technology unlocks large-scale employment for relatively low-skilled workers. A relatively small number of agricultural managers, engineers, scientists and technicians enable employment for a large number of semi- and un-skilled agricultural workers. Export-oriented horticultural products such as fruit are high-value, generating the highest returns per unit of land relative to other agricultural commodities in South Africa (Chisoro-Dube et al. 2018) and tend to pay higher wages than other rural jobs (Visser & Ferrer 2015) to the poorest South Africans – rural women.

South African farmers have demonstrated their ability to acquire the know-how to produce and export horticultural products, mainly fruit. Whereas we run a modest trade deficit or small surplus in field crops and animal products, net fruit exports have expanded considerably, from around $0.5bn in 2001 to $2.5bn in 2016 (Figure 1). Net exports of nuts have also grown dramatically, albeit off a low base. However, this growth has taken place without significant state provision of public goods and financial support and is well below the scale that is both possible and necessary to begin to reverse rural unemployment and poverty. 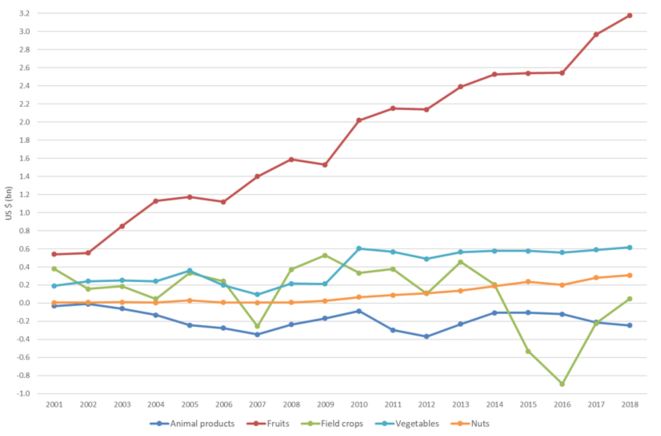 To be absolutely clear: field crops and livestock are still essential to the economy and food security, with an associated need to sustain and increase their output and productivity. The opportunity for increased high-value agricultural production and exports and employment discussed here should also not detract from the imperative to expand manufacturing and exports of processed agro-processing products. However, high-value agriculture offers a feasible yet overlooked opportunity to dramatically expand employment for the most vulnerable group: rural women.

A confluence of global factors means that a relatively small middle-income country like South Africa, with its demonstrated ability to export high-value agricultural products, is presented with virtually unlimited international demand. International demand for these products has grown more rapidly in global trade over recent decades than traditional agricultural commodities and their share in agricultural trade is set to increase further (Newfarmer et al. 2019). High-income OECD economies account for the bulk of demand for high-value agricultural imports. While the rest of the African continent provides a long-term market opportunity, the greatest growth in global demand for high-value agricultural products arises from populous Asian countries undergoing rapid industrialisation, the associated processes of urbanisation and the rise of a mass of relatively affluent middle-class consumers.

Seizing the labour-intensive opportunity afforded by export-oriented horticulture requires building capabilities at scale, which would dramatically raise the welfare of rural black women. It could also promote the rapid growth and integration of emerging black farmers, learning from and scaling up existing initiatives. For instance the deciduous fruit industry has developed a programme to provide technical extension services, facilitate finance and entry into export supply chains for emerging black farmers (Hortgro n.d.). Scaling up requires policies and compromises to create an eco-system that both supports and links large and small-scale farmers as combined South African suppliers on international markets.

Realising the potential of high-value agriculture can play an important role in reversing often dysfunctional dynamics of the rural political economy. Declining wage employment in the agricultural sector and the collapse of poorly-designed regional decentralization policies from the apartheid era towards the end of the 1980s have also had profound consequences for the post-1994 political economy of rural areas. The absence of rural wage employment and limited opportunities to accumulate productive capital have rendered many rural municipalities a site of conflict over access to jobs and tenders. Associated financial mismanagement, in turn, compounds underinvestment in infrastructure and more generally erodes the local productive base.

Bhorat H, Kanbur R & Stanwix B. (2014) Estimating the Impact of Minimum Wages on Employment, Wages, and Non-Wage Benefits: The Case of Agriculture in South Africa. American Journal of Agricultural Economics, 96/5: 1402–19.

---------  (2019) Oranges are not only fruit: The Industrialization of Freshness and the Quality of Growth. The quality of growth in Africa, Initiative for policy dialogue at Columbia. Challenges in development and globalization. Columbia University Press: New York.