How big is the illicit cigarette market in South Africa?

Reads 1,835
Nicole Vellios, 7 September 2022
In August 2022, British American Tobacco South Africa (BATSA) announced the illicit cigarette trade in the past year comprised 70% of the local market. To test whether this claim is true, I updated previous research that provided estimates of illicit trade from 2002−2017 to include estimates for 2018−2021. Using gap analysis, I estimated that between 2002 and 2009 the illicit cigarette market accounted for around 5% of the total market. Since 2010, however, the illicit cigarette market has increased sharply: by 2017, it accounted for 30%−35% of the total market. But it was the 20-week cigarettes sales ban in 2020 that really entrenched the illicit market. I estimate that illicit trade was 54% in 2020 and 2021. These estimates are lower than BATSA’s estimate of 70%, but are still cause for much concern. BATSA’s estimate is wrong for two reasons: the estimate is for Gauteng (one of the nine provinces in their sample), not South Africa as a whole, and, secondly, its estimate relates to the proportion of stores it claims sold illicit cigarettes, as opposed to the overall proportion of illicit cigarettes consumed.

Illicit trade can take several forms, such as smuggling, counterfeiting, and tax evasion. In South Africa, illicit trade in cigarettes is predominantly about tax evasion. In 2021/2022, the excise tax on a pack of 20 cigarettes was R18.79. The tax burden increases to R21.61 when the 15% VAT on excise is included (R18.79 + R2.82). Since around 2014, local manufacturers have been evading excise taxes by under-declaring the number of cigarettes produced.[1] In 2017, illicit trade accounted for 30%−35% of the total market.

The increase in illicit trade is attributed to the unravelling of the South African Revenue Service (SARS) in 2014. State capture and its impact on SARS’s ability to collect excise taxes on cigarettes has been documented in several books, including Rogue (2016) and Tobacco Wars (2019) by Johann van Loggerenberg, The President’s Keepers (2017) by Jacques Pauw, and Dirty Tobacco (2020) by Telita Snyckers.

There are several methods used to estimate illicit trade, such as the examination of cigarette packs, the price threshold method, and gap analysis. Gap analysis is based on the premise that total cigarette consumption in a country is equal to legal (tax-paid) consumption of cigarettes plus illicit consumption. Self-reported consumption estimates (from survey data) are compared with legitimate sales (as declared to the excise tax authority. The gap between self-reported consumption (scaled up to account for under-reporting) and legitimate sales indicates the size of the illicit market.

Annual self-reported consumption was estimated using data from three surveys: (1) the All Media and Products Survey (2002−2015), (2) the National Income Dynamics Study (2008−2017), (3) the National Income Dynamics Survey: Coronavirus Rapid Mobile Survey (2020), and (4) the Global Adult Tobacco Survey (2021). Data for 2018-2020 were interpolated. The data consider only those 15 years and older, and are weighted to represent the actual population. Population data are obtained from the United Nations database.

The amount of excise revenue received from domestically produced cigarettes was obtained from annual national budget reviews compiled and published by the National Treasury. These revenue figures were converted into the number of packs sold by dividing revenue by the excise tax per pack. The number of imported cigarettes was obtained from the Department of Trade, Industry and Competition.

I use the year 2021 to illustrate how the gap is estimated:

In 2021, the South African Medical Research Council conducted a national survey on smoking, the Global Adult Tobacco Survey, which surveyed South Africans aged 15 or older. Although the granular data have not yet been released, a factsheet indicates the daily cigarette smoking prevalence in 2021 was 20.5%. In 2021, there were 42.4 million South Africans aged 15 or older (United Nations population data). That means there were 8.6 million smokers (42.4 million x 20.5%). According to NIDS-CRAM,[2] daily smoking intensity in 2020 was 8.8 cigarettes per smoker. Using the same number for 2021, this amounts to 27.6 billion sticks (i.e., individual cigarettes) smoked in 2021 (8.6 million smokers x 8.8 sticks per smoker per day x 365 days in the year). To account for under-reporting of cigarette consumption, which is common in surveys, I uplift this number by 5%, which results in total consumption of 29.1 billion sticks.

In the 2021/2022 financial year, the government collected R9 158 million in excise taxes from locally produced cigarettes and cigarette tobacco. The excise tax for a pack of 20 cigarettes was R18.79. This means 487 million locally manufactured packs were sold on the legal market (R9 158 million/R18.79) in 2021/2022. Annualising this number to the calendar year 2021 (taking 3/4 of the volume in the financial year 2021/2022 and 1/4 of the volume in the previous financial year 2020/2021) gives 474 million packs. This is equal to 9,474 billion individual cigarettes. Adding to this number the 3,975 billion imported cigarettes results in a total legal cigarette market of 13.5 billion sticks. 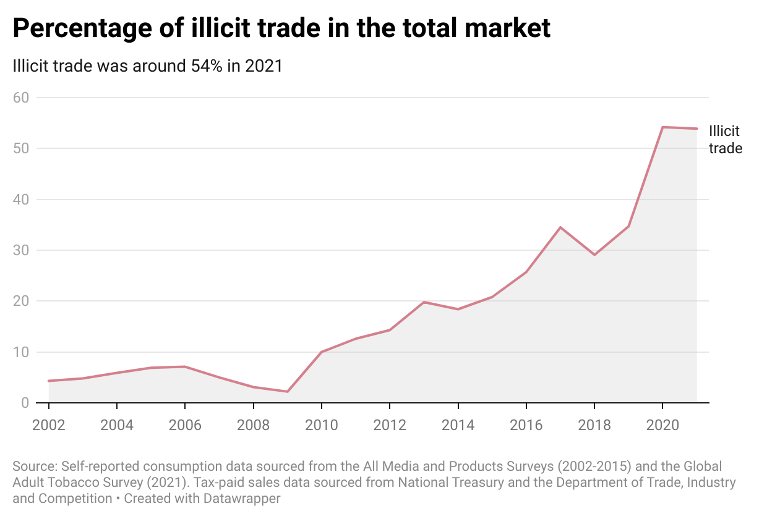 Between 2002 and 2009, the illicit cigarette market accounted for around 5% of the total market (See Figure 1). Since 2009, the illicit cigarette market has increased sharply: by 2017 illicit trade accounted for 30%−35% of the total market. By 2020, illicit trade was around 54%. The illicit market was greatly stimulated by the 20-week sales ban in 2020, when no cigarettes were sold legally and when the government received no excise revenue for cigarettes. By 2021, the illicit market remained  at around 54%.

At the end of August 2022, the media widely reported BATSA’s findings that illicit trade of cigarettes in South Africa was 70%.[3] BATSA’s general manager Johnny Moloto told News24 that nearly 70% of all cigarettes consumed in the South African market are from illicit brands.

Ipsos, the company hired by BAT to conduct research on illicit trade, sampled 4593 stores. The latest Ipsos report,[4] published online, cites findings from wave 5 of its surveys. Data were collected from 2-9 March 2022. Ipsos uses a mystery shopper methodology, where a ‘shopper’ poses as  a consumer at retail stores, and asks to buy the cheapest 20-pack available, and/or the cheapest carton available.

Using the threshold method, which uses retail price to separate legal from illegal cigarettes, Ipsos researchers determine whether or not stores sell illegal cigarettes. They determine four thresholds. The first two thresholds are very low and can be ignored. The third threshold is what they call the Minimum Collectable Tax (MCT) of R22.79, comprised of R19.82 excise rate and R2.97 (15% VAT on excise). The fourth and highest threshold of R27.89 is based on the MCT (i.e., R19.82 excise rate + R2.97 VAT on excise) plus an additional R4.43 (total net margin[5]). The threshold that BATSA reports as illicit in the media is the third threshold of R22.79 and below.

Why BATSA’s estimate is wrong

The table below comes from Ipsos’s latest report, published on 28 March 2022 (available on BATSA’s media page). According to this table, the share of stores in South Africa that sold cigarettes at or below R22.79 for 20 sticks (a pack) was 34%, not 70%. The table below indicates that illicit trade is particularly problematic in the Free State, Gauteng, and the Western Cape, but much lower in the other provinces (e.g. 0% in the Northern Cape).

On 6 April 2022, BATSA published a press statement and the Ipsos wave 5 report, and in August 2022, Ipsos’s results were misquoted by BATSA. I considered several reasons why this could have happened: (1) BATSA made a genuine mistake, (2) BATSA deliberately misquoted research to exaggerate illicit trade, or (3) the media misquoted BATSA. That the last was not the case is shown by this direct quote from BATSA’s general manager, Johnny Moloto, to Fin24: ‘Almost 70% of all cigarettes consumed in South Africa belong to illicit brands. This has turned South Africa into the biggest illicit tobacco market in the world, off the back of the five-month national sales ban in 2020, which the Supreme Court of Appeal recently declared was illegal’.[6]

It seems the timing of BATSA’s announcement of the 70% statistic is linked to the recent media coverage of SARS securing a preservation order against the Gold Leaf Tobacco Corporation.[7] BATSA may have taken the opportunity to rework the findings of its March 2022 report to present itself in a favourable light.

Illicit trade is extremely high in South Africa, but not as high as the tobacco industry claims. SARS should secure the cigarette supply chain to monitor cigarettes from the point of production to the point of sale. The World Heath Organization’s Framework Convention on Tobacco Control provides guidance on how to do this. These guidelines are detailed in the Protocol to Eliminate Illicit Trade in Tobacco Products,[9] which South Africa has not yet ratified. This protocol has been ratified by more than 65 countries to date (September 2022). The protocol commits governments to taking effective steps to reduce the illicit trade in tobacco products, such as allowing only licensed manufacturers to produce cigarettes and implementing a track and trace system.

If SARS does not secure the supply chain, South Africa will continue to lose valuable revenue.

Pauw. J, 2017. The President's Keepers: Those Keeping Zuma in Power and Out of Prison. Tafelberg.