Reservation wages found in surveys can be very misleading

Reads 13,935
Rulof Burger, Patrizio Piraino, Asmus Zoch, 12 September 2017
The responses of unemployed workers to the typical survey question about their ‘lowest acceptable wages’ are susceptible to error and overestimation – particularly for people in persistent joblessness. Studies using only the responses to the standard question may incorrectly conclude that vulnerable workers are unemployed because they tend to price themselves out of employment – while in fact their responses are just unreliable and distorted indications of their true reservation wages. Alternative questions would give more reliable results.

In the analysis of the causes of unemployment, an important question is the extent to which the unemployed are ‘pricing themselves out of the labour market’ by demanding too high wages. This relates to the ‘reservation wage’ of job-seekers: the lowest wage they would be prepared to accept. It is an established tradition in labour economics to use unemployed workers’ responses to a question about the lowest wage they would willing to work for as a measure of their reservation wage.

This article reports on recent work by Burger, Piraino & Zoch (2017) that scrutinises the likelihood of overestimation and ‘response noise’ in the answers of the youth to a traditional open-ended question about reservation wages – notably in a context of widespread joblessness in which many young people have few opportunities to evaluate specific wage offers. While of a technical nature, the findings have important implications for how survey findings on reservation wages should be treated and interpreted. They are also important for how surveys are designed, how labour supply is measured and how labour markets are analysed, especially in the context of sustained high unemployment.

While survey data is a key source of information for analysing economic phenomena, measuring variables of interest with survey questionnaires and interviews with individuals is often difficult. Slightly different formulations of the same question can trigger different cognitive and non-cognitive processes in respondents and hence produce differing responses, even within the same person. This applies especially to information obtained from subjective questions (which require a respondent to formulate a personal opinion or view). Indeed, behavioural literature shows that a multitude of factors can influence answers to subjective questions so much as to raise concerns about the meaningfulness of the information provided by the respondents.

In this regard, concerns have been raised in a number of studies about survey questions that elicit data on self-reported reservation wages. Specifically, self-reported reservation wages obtained from chronically unemployed people may be less reliable than those elicited from individuals with a stronger attachment to the labour market (in the sense that they have either recently worked or resided in a household or neighbourhood where most people work).

There are two main reasons for this concern.

The role of such thinking processes and influences has important implications for the reliability of the survey results on reservation wages, especially when many of the respondents have been unemployed for a long time. In the absence of any recent real-world experience of evaluating job offers, the respondents may be particularly prone to irrelevant priming or anchoring effects when asked to report their reservation wage. If this were the case, it could imply that the reported reservation wages of the chronically unemployed may be even less reliable in analysing labour markets than those of individuals with a stronger attachment to the labour market.

Therefore it is imperative to investigate whether there is any evidence of these effects, particularly in South Africa with high chronic joblessness.

We used the Cape Area Panel Study (CAPS, 2002-2009), which focuses on the youth between the ages of 14 and 22.[1] Our goal was to investigate how the way a question on the reservation wage is formulated (and where it is placed in the survey) can affect the variability and reliability of the response. Specifically, we tested whether formulating a question about reservation wages in such a way that it would mimic the way in which job offers are made in the labour market (rather than as an open-ended question) would elicit more reliable responses about a reservation wage. In addition, we focused on persons with a relatively weak attachment to the labour market.

We analysed a series of CAPS survey questions that enquire whether persons would accept specific possible wage offers, each associated with an occupation. Crucially for our purposes, the CAPS surveys asked two types of questions relating to reservation wages. These questions were posed to all respondents, irrespective of their employment status. The first (and traditional, open-ended) question was:

What is the absolute lowest take-home wage that you would accept for any permanent, full-time work?

This was followed by a series of questions about whether or not the respondent would accept a sequence of increasing hypothetical wage offers, for each of seven different jobs. For example:

We refer to this second measure of reservation wages as a ‘probed’ measure, since the questions encourage respondents to carefully probe their preferences in a way that is quite different from that when answering the traditional open-ended question about reservation wages.

It is instructive to see whether or not the two measures produce substantively different values for reservation wages. For the whole sample, 60% of the respondents reported a ‘lowest acceptable wage’ (to the first, traditional reservation-wage question) that was subsequently contradicted in a later question by their expressed willingness to accept a lower hypothetical wage offer that was linked to a specified occupation. For the youths who had never worked before or who resided in districts with a high level of unemployment, this share is significantly higher at around 67%. Figure 1 shows a persistent gap between the ‘traditional’ measure (blue line) and the ‘probed’ measure (orange line) of reservation wages reported by the youth in the sample.

This suggests that in response to the traditional question, respondents – and particularly those who were chronically unemployed – overstated their reservation wages. Studies that only look at responses to the traditional question may, therefore, incorrectly conclude that job-seekers with a low attachment to the labour market tend to be unemployed because they price themselves out of employment – while in fact their responses are just unreliable indications of their true reservation wages.

Next, we consider responses to what job-seekers deem to be ‘typical wages’ for workers like them, and we compare these to the wages actually earned by workers like them. International studies have found that the unemployed youth have unrealistically high wage expectations. This also applies to our sample: youths with no work experience believe the typical wages for someone like them is much higher than what they are likely to earn, given their characteristics. On average, the traditional measure of the reservation wage is very close to what the youth in the sample perceived as typical wages (i.e. anchored in overly optimistic expectations), whereas the probed measure is far below the perceived typical wages (and even somewhat below the predicted market-related wages).

Finally, we explore whether the responses to the traditional measure are more vulnerable to priming (or sequencing) effects than the probed measure. The questions concerning the reservation wage were moved around in the questionnaire between waves (in different years) of the CAPS surveys. This allows us to see how sensitive the responses were to the preceding questions.

Figure 2 repeats figure 1, but has been adapted to highlight the stability or instability of the two measures. The second and third observations (in the blue line) are out of line relative to the dashed line that approximately links the other three observations. This clearly shows that the unemployed youth gave higher values for ‘lowest acceptable wages’ when the preceding question was about long-term labour-market prospects rather than about their current job search. In contrast, the probed responses (orange line) are seen to be much more stable across waves, despite the fact that this question had also been moved around between waves in the survey.

Figure 2: The impact of question sequence on reservation-wage responses 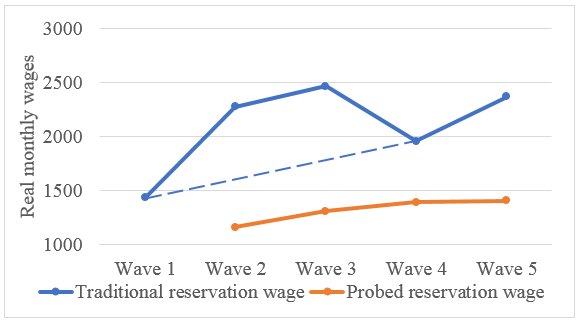 
Testing the two measures in labour-market analyses of reservation wages

Standard theories of how job seekers behave suggest that reservation wages should be higher for those with valuable assets, with high non-wage income, who have to travel far to work, who possess valuable attributes like schooling and work experience, who have been unemployed for a relatively short duration, or who reside in regions where there is low unemployment. Which reservation-wage measure responds most sensibly to these economic variables? Our statistical analysis shows that interactions of the probed reservation-wage measure with these variables are consistent with job-search theory, whereas such interactions are less robust for the traditional measure. This further suggests that the probed measure is a better reflection of the ‘true’ reservation wage.

We also performed a statistical analysis to ascertain which reservation wage measure is better at predicting key aspects of employment behaviour. Our results show that, compared to the traditional measure, the probed measure is significantly more effective for predicting aspects like the wage offers that individuals actually accept, their likelihood of being employed, and the probability that they will quit their jobs. In fact, the traditional measure fails to predict any of these outcomes adequately.[2]

The results presented in the paper have implications for studies that investigate individuals’ responses to survey questions concerning reservation wages. Such analyses of wages and employment in high unemployment countries cannot ignore the lower reliability of self-reported reservation wages. One should thus be careful when considering research results that summarily interpret reservation-wage results as indicating that vulnerable workers are more likely to price themselves out of employment. Our analysis suggests a simpler explanation for these patterns: self-reported reservation wages in traditional survey questions are susceptible to a higher degree of overestimation when individuals are rarely confronted with actual wage offers.

The analysis also suggests that it may be possible to obtain reliable survey responses on individuals’ perceptions, beliefs or intended behaviour that is notoriously difficult to measure with surveys – like health or support for redistributive policies – providing that the survey questions are formulated appropriately.