Social stratification around the NSFAS threshold: A dynamic approach to profiling the missing middle

Reads 1,586
Emma Whitelaw, Nicola Branson, Murray Leibbrandt, 16 March 2022
In 2018, government announced that the National Student Financial Aid Scheme (NSFAS) would fund all eligible post-school students whose household income was R350 000 or less. The Department of Higher Education and Training is now focusing on what it calls the “missing middle” – students who come from households whose income is too high to make the NSFAS threshold but too low to afford fees –between R350 000 and R600 000. Guided by the poverty dynamics literature, we show that the “missing middle” is a complex category, comprising two distinct groups based on their relative economic stability or vulnerability. A key consideration for how we understand socio-economic need – on both sides of the NSFAS threshold – should reflect the household circumstances that generate economic vulnerability, not only household income at a given point in time.

Following a change in funding policy in 2018, financially eligible post-school[1] students, whose combined household income is R350 000 per annum or less, are awarded full bursaries through the National Student Financial Aid Scheme (NSFAS). However, recent attention has focused on the lack of affordability of post-school education for the missing middle – a group colloquially defined as those whose household income levels are too low for them to afford fees, but too high to meet the NSFAS income threshold for funding eligibility. Missing middle students are currently considered those whose household income is between R350 000 and R600 000 per annum. The Department of Higher Education and Training (DHET) aims to increase the number of NSFAS beneficiaries by 43% by 2024, working towards a financial aid system that is inclusive of the missing middle.[2]

That said, the sustainability of the present funding model is currently under scrutiny. The design of a sustainable, comprehensive, and progressive financial aid scheme for the future requires a thorough deliberation of the complexities that affect access to post-school education. If free education for all students is not viable, a policy that differentiates students according to socio-economic need could be on the table. Therefore, recognising that there is a distribution of household circumstances both below the current NSFAS threshold, and within the missing middle, is necessary.

One possible approach to differentiating socio-economic need would be to simply consider the household circumstances of those on either side of a household income threshold. However, guided by the poverty dynamics literature, we argue that economic stability – or lack thereof – is a key dimension off which to differentiate households, because it affects the type of decisions that individuals make. Relatively more secure and stable households are better able to absorb risk and plan for the future.

Mobility over time is associated with measurable differences in household characteristics related to economic security and stability. Thus a second approach to differentiating socio-economic need recognises that mobility patterns, as well as current living standards, are important considerations for policy tools. We thus propose a framework that takes account of mobility around the current NSFAS household income eligibility threshold, and not only current income status. This approach recognises that an individual's household income position relative to a threshold can change and is linked to economic stability – or lack thereof. Such an approach allows us to profile the characteristics of households in a way that could be useful for considering a differentiated approach to funding.

Our aim is not so much to make a policy recommendation, but rather to highlight the socio-economic circumstances of South African households in relation to the current threshold to inform and provide context to complex policy considerations.

In Figure 1, we illustrate our strategy for classifying individuals based on their vulnerability to their household income remaining below or falling below the funding threshold. The left column shows conventional policy classes, typically used to reference groups in the post-school funding policy environment. The middle and right columns show how we re-conceptualise funding classes, based on the conditional probability that an individual's household income moves above or falls below the threshold within a two-year period. These probabilities are predicted using coefficient estimates from a multivariate probit regression [3] fit to nationally representative panel data, collected approximately every two years between 2008 and 2017.[4]  To the best of our knowledge, this is the first study to apply an income dynamics approach to studying funding thresholds, while addressing simultaneously the endogeneity of initial conditions and panel attrition.

Locating the current funding threshold in the income distribution

In 2018, the NSFAS household income threshold for eligibility was extended from roughly R122 000 to R350 000. Figure 2a locates these NSFAS funding thresholds in the South African 2017 national household income distribution. It is apparent that most households fall below the R350 000 threshold (91%), with a small number (5%) remaining in the missing middle (between R350 000 and R600 000).

In Figure 2b, we refine the classification of households by taking economic (in)stability into account. The household income distribution of the persistently eligible and the transiently eligible is distinct, indicating that the transiently eligible are better off, on average, in terms of household income. On the other hand, the income distribution of the vulnerable and stable missing middle groups is similar. However, there is compelling variation in household circumstances among the missing middle that speaks to relative economic vulnerability and stability. 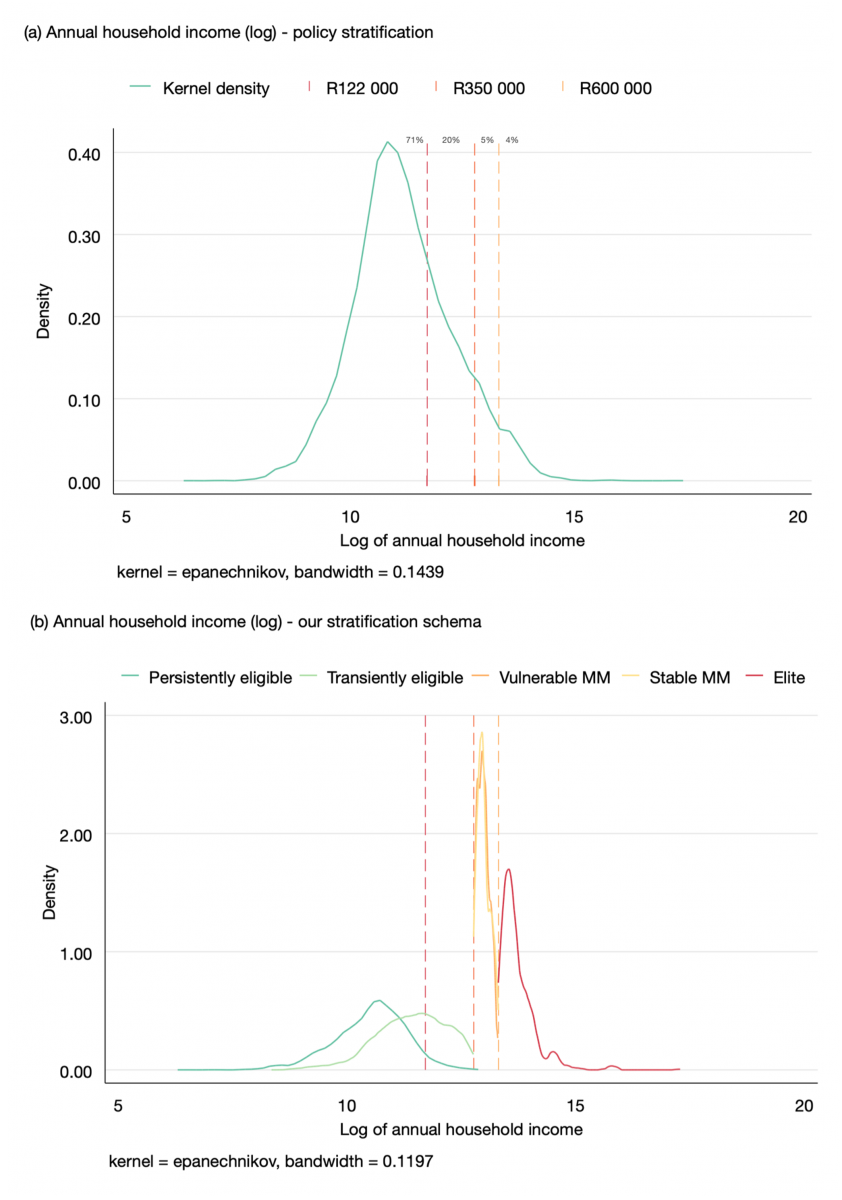 Profiling the NSFAS eligible and the missing middle 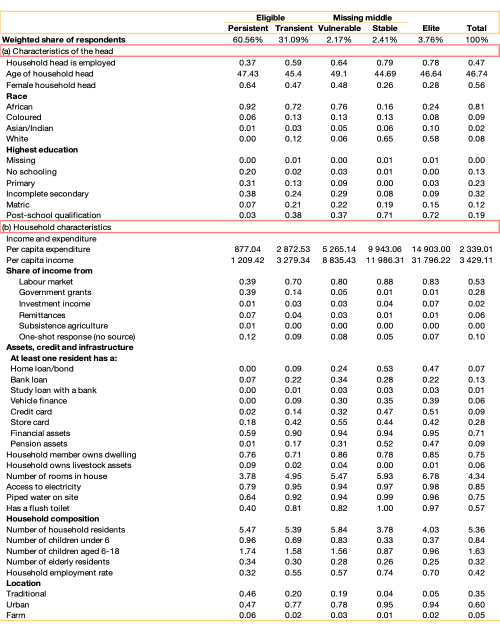 Table 1 indicates that between 2008 and 2017, 60% of the population is classified as persistently eligible for NSFAS by our stratification schema. That is, just under two thirds of the population face an above average likelihood of their household income remaining below R350 000 per annum within two years. The average per-capita expenditure of those in the persistently eligible group is just R877.44 per month,[5]situating the average individual in this group below the upper-bound poverty line.[6] Moreover, less than a third of working-age adults in these households hold some form of employment. While we term those in the missing middle who face economic precarity (because of an increased likelihood that their household income may fall below the NSFAS threshold) the ‘vulnerable’ missing middle, our results show that there is substantial vulnerability below the funding threshold that differs from the vulnerability facing those in the missing middle.

We further observe that the missing middle seems to comprise two distinct groups, despite their income distributions appearing similar. A key motivation for our approach is that by focussing purely on income thresholds, we can risk mis-identifying a share of the population whose household income puts them in a given class (e.g. the missing middle) but who nevertheless still face relative economic insecurity or vulnerability. The share of the missing middle with access to a home loan or bond in their household is 38% (not shown here). However, as Table 1 highlights, more than half the individuals in the stable missing middle live in a household where a resident has a home loan or bond, but this share is less than a quarter for those in the vulnerable missing middle. Our results show that aggregating household circumstances within the missing middle overstates the well-being of vulnerable individuals and understates the relative well-being of those we classify as more economically secure.

A key policy priority currently is to establish a sustainable, comprehensive, and progressive financial aid scheme to fund students enrolled in post-school education – a basis for economic empowerment and upliftment. If free education for all students is not viable, a differentiated policy might be necessary. The value in our approach lies in highlighting the concepts of mobility, vulnerability, and economic stability to differentiate the socio-economic circumstances of households in the context of the current post-school funding policy. While income thresholds are always likely to exist for operational purposes in a social support environment, our work shows that when considering the design of support, 1) the current NSFAS funding threshold should not be lowered – it is well targeted at the those living in the most vulnerable households, and 2) when considering extending support to the missing middle, a differentiated funding instrument could work. This group is more likely to be engaged in formal credit markets, for example. That said, we show that economic vulnerability manifests on either side of the current NSFAS funding threshold and acknowledge that economic instability can be an important constraint to post-school access – even when income is above the threshold.

[1] Post-schooling refers to learning that takes place after basic education. Post-school students must attend a public university or Technical and Vocational Education and Training college to be eligible for funding from the National Student Financial Aid Scheme, but the post-school sector further comprises private institutions as well as Community Education and Training colleges.

[4] This data is from the National Income Dynamics Study. There are currently five waves of data available. Individual transitions are observed between consecutive waves. For further details on the data and methodology of this study, see Whitelaw, Branson, and Leibbrandt (2021). See also Stats SA. (2019). National Poverty Lines. (Statistical release P0310.1).

[5] In December 2017 Rands – the time the announcement of the new policy was made.