Reads 102,911
Justin Visagie, 29 April 2013
The middle class is a hot topic in media and policy circles. But how should the middle class be defined, particularly in a country with high levels of inequality? Individuals and households which fall in the actual middle of the income distribution in South Africa have a standard of living well below a ‘middle-class lifestyle’. Defining the middle class on the basis of the ‘actual middle’ versus ‘relative affluence’ provides vastly different pictures. This necessitates great care in using these conceptions, especially in policy design.

The everyday use of the term middle class conjures up images of families (or individuals) with a certain lifestyle or level of affluence as evidenced by their expenditure on food, clothing, furniture, cars, education, holidays, etc. as well as assets such as housing – but, at the same time, this term refers to people who are not considered rich or upper class in some sense.

In South Africa, thinking about what it means to be middle class is complicated by the low average and median levels of incomes in the country and the very wide distribution of income. Households who have achieved a modest standard of living are actually near the top of the country’s income ladder.

In many discussions the middle class is synonymous with both the affluent and the very affluent. One such example is the well-known study of Black Diamonds by the UCT Unilever Institute of Strategic Marketing, which describes the emergence of the black middle class – which includes the top-earning black people – in post-Apartheid South Africa.

Is such an affluence-based conceptualisation of the middle class sensible – or relevant to policy making – in South Africa? How should we best define the middle class in an economy characterised by large inequalities in income? Who really are in the ‘middle’ and what does it mean for economic policy?

There are several reasons why the middle group of households is of interest. First, evidence suggests that the relative growth of the share of total income of those in the actual middle of the income distribution leads to greater political stability, to a citizenry with higher levels of human development (including better education and health) and even to higher levels of economic growth (Perotti, 1996; Easterly, 2001, 2007). Secondly, changes in the middle income interval would help to assess whether growth has benefited the ‘average South African’ in post-1994 South Africa.

A second common way in which to define the middle class is to choose an interval of per capita household income that indicates some conception of relative affluence (often associated with certain patterns of expenditure and possessions). The boundary lines for what constitutes affluence vary greatly in the literature. For example, Banerjee and Duflo (2008) define the middle class in a sample of developing economies as households who earn from US $2 – $13 per person per day, whereas Wilson and Dragusanu (2008) use an interval of US $16 – $82 per person per day. Such divergence reflects the extent to which the standards of living of developed countries are applied to developing countries – or the extent to which researchers grasp the reality of poverty and incomes in developing countries.

There are also clear reasons for analysing households who are relatively affluent: this group provides an important base of education and skills, promotes entrepreneurship and investment and is an important source of consumer demand (Kharas and Gertz, 2010; Birdsall, 2010).  In addition, in terms of social justice and equity it is deemed important to achieve balance in the racial and gender composition of the affluent group.

The research for this article uses data from the 2008 household survey of the National Income Dynamics Study (NIDS), which provides detailed information on sources of household income. The figures mentioned therefore are for 2008 income levels and in 2008 Rands. They should not be interpreted in terms of current, 2013 money terms.

In analysing the actual middle of the income distribution in South Africa for 2008, I use an interval of 50% to 150% of the median per capita income per month (which was R759 in 2008). This means that the literal middle group in South Africa comprises households earning between R380 and R1,140 per capita per month – in 2008 money terms.[3] In aid of intuitive clarity one can assume a representative household size of four; the per capita amount will then translate into a total household income of R1,520 to R4,560 per month for the middle group.

In order to measure the middle class in terms of affluence, I determine the income interval to correspond to households in which the highest income earner is in a typically ‘middle class’ occupation (Visagie, 2013). Middle class occupations include managers, senior officials, legislators, professionals (such as teachers and nurses), associate professionals, technicians and clerks. Working class occupations would include plant and machinery operators, craft and related trade workers, skilled agriculture and fishery workers, service and market sales workers and all elementary occupations.[4] On average, households in which the highest income earner works in a middle-class occupation have an income of somewhere between R1,400 – R10,000 per person per month (in 2008 money terms). For our representative household of four persons these figures translate into a total household income of between R5,600 and R40,000 per month (after tax). The upper income limit may not appear to be very high, but is in fact very exclusive – only the top 4% of households (the ‘elite’?) in South Africa receive more monthly income than this.

Table 1: A comparison of the ‘literal middle’ and ‘relatively affluent’ middle in 2008 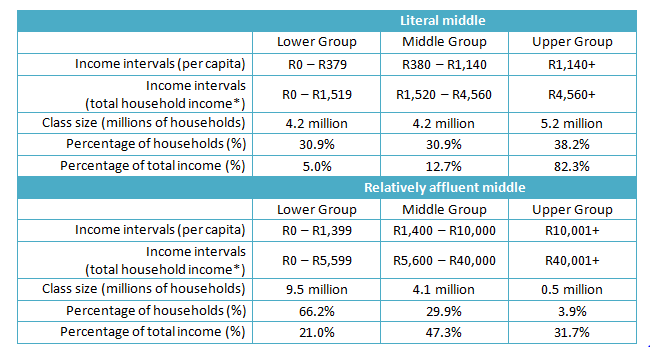 Figure 1 shows the position of middle class households (according to either of the definitions) graphically, relative to the entire income distribution of SA households. The horizontal axis is expressed in terms of total household income for our illustrative household of four persons. The vertical bars show the percentage of households in each income interval and form a curve that illustrates the huge degree of income inequality across households.

Figure 1: The spread of households within the income distribution in South Africa, 2008 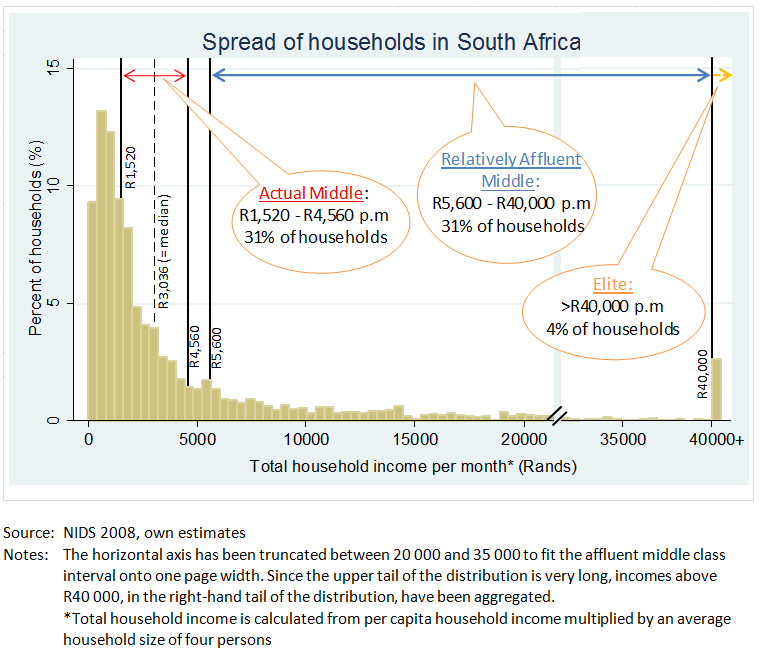 Evidently the income intervals of these two groups do not reconcile. Note how low down on the income distribution curve the actual middle group in fact lies – while all those in the middle class in terms of relative affluence are comfortably above the literal middle group.

It follows that the differences between the two groups go beyond income and can be expected to reflect aspects of poverty and deprivation. Figure 2 shows that the average educational achievement of the actual middle is far below that of the affluent middle class. Whereas over half of individuals (of working age 15 – 64 years) in households in the affluent middle have attained matric or tertiary education, less than 20% of individuals in the actual middle have achieved the same. 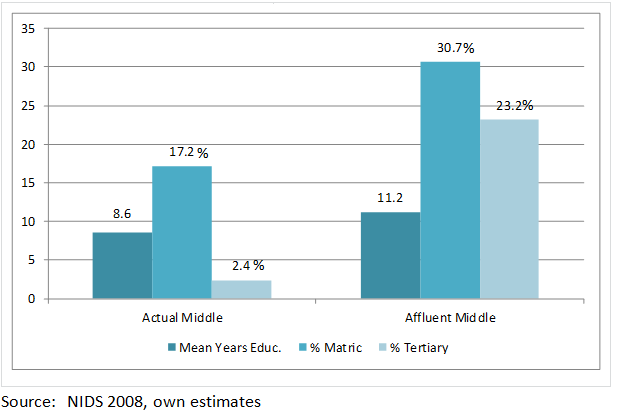 Figure 3 shows the contrast between the two definitions of the middle in terms of racial composition. People who reside in households within the actual middle of the income distribution in South Africa are overwhelmingly African, with a small minority of white households. When it comes to the affluent middle class, Africans represent just over half of all individuals. 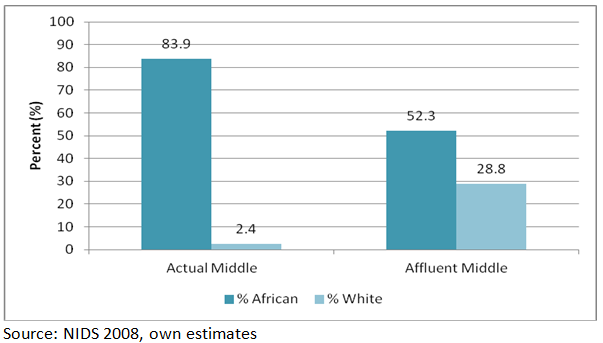 Although this suggests that the racial representivity of the relatively affluent middle class has improved considerably by 2008, Africans are still underrepresented in comparison to their total population share (and whites over-represented). The racial contrast is even starker when the uppermost elite are considered, i.e. the top 4% of all households. Here whites comprise over 60% and Africans less than 20% (Visagie, 2013).

The contrast in the nature of the ‘middle’ across the two approaches has important ramifications for policymakers who seek to promote the growth (size) and status (living standards) of ‘the middle class’.

If the middle class is conceptualised in terms of relative affluence, growing the relative size of the middle class would amount to supporting economic policies which would favour the relatively affluent and leave the 75% lower class households behind, thereby increasing income inequality and income polarisation. Nevertheless, this would have economic benefits such as growing the pool of people with skilled occupations and raising consumer demand within the domestic economy, which could lead to higher economic growth.

In contrast, if the middle class is defined as the actual middle group, then increasing the relative size of the middle class – many of whom are quite poor – would imply supporting economic policies that favour the poor and non-affluent and thus decrease the polarisation and inequality of income. This may promote greater social and political stability and contribute to better educational and health outcomes in the longer term, and thus promote economic and human development as well as social justice. This view of the middle class provides an important tool for understanding the status of the ‘average’ South African and provides policy makers with a more balanced assessment of development in the country.

Understanding the contrasts between the different conceptions of what and who belong to the ‘middle class’ provides a striking perspective on high inequality in the distribution of income in South Africa.

It should be better appreciated that the middle group in South Africa, comprising 4.2 million households, is quite poor (receiving between R1,520 and R4,560 as their total household income per month for a household of four, in 2008 Rands). The relatively affluent middle class actually lies in the upper ranges of the income distribution (but still includes, in its lower ranges, households with a very moderate level of income, i.e. R5,600 total income per household per month). Only a small top-end of households – less than 4% of all South African households – receive a total household income of more than R40,000 per month (for a four-person household, in 2008 Rands).

Any (alleged) association between the middle class and economic development and growth is dependent upon which middle one is talking about. For instance, strong growth in the incomes of the affluent middle would increase consumer demand; however, this may also result in greater political instability if those in the actual middle remain poor.

Easterly, W. (2007). Inequality Does Cause Underdevelopment: Insights from a New Instrument. Journal of Development Economics, 84: 755-76.

Visagie, J. (2013). The Development of the Middle Class in South Africa since the Transition to Democracy. University of KwaZulu-Natal, PhD thesis – currently under examination.

Visagie, J and Posel, D. (2013). A Reconsideration of What and Who is Middle Class in South Africa. Development Southern Africa, forthcoming.