Are internal migrants more likely to be unemployed than locally born residents?

As in the rest of Africa, there is a constant flow of people from poorer parts of South Africa to wealthier, more urbanised provinces with stronger economies. For example, net migration into Gauteng and the Western Cape has been and continues to be positive (Ziehl, Econ3x3 2016). A pertinent question is how migrants from poor provinces fare in the labour market in their newly-adopted area or province: do they find jobs or become unemployed?

Two data sources are used to assess these issues, with one covering a smaller geographical area than the other. The Khayelitsha/Mitchells Plain (KMP) survey took place in 2000 and involved black and coloured residents of the magisterial district of Mitchells Plain. At that time, it was home to more than two-thirds of the African and a fifth of the coloured populations of Cape Town. A predominantly working-class area with high unemployment, it encompassed some established African townships (Langa, Gugulethu and Nyanga), some informal settlements (Crossroads and Browns Farm) and the newly-established township of Khayelitsha, with the first houses having been built in 1986.

The vast majority of adults in the KMP survey (77%) was not born in Cape Town, with most (56%) having been born in the Eastern Cape. Less than half a percent were born in a foreign country. For the Western Cape as a whole, the census data indicate that 40% and 31% of the population were migrants in 2001 and 2011 respectively. Being based on ‘place of birth’, these data do not indicate when the migrants moved to the Cape.

The results presented below are derived from a cross tabulation of migrant status and employment status (employed, unemployed and not economically active, as defined by Statistics SA.[1])  The question is whether the labour-market behaviour and status of migrants and non-migrants differ in terms of these three categories. (I also compare my findings briefly to similar South African studies, even though they mostly work at the national level.)

Table 1 and figure 1 show the key measures of labour-market status, using the extended definition of unemployment, which includes discouraged workers.[2] (For results using the narrow definition, see Ziehl 2016b.)

Are migrants less or more likely to be employed than locally born residents?

Combining all forms of employment, the data show that in 2000 migrants in Khayelitsha/Mitchells Plain were somewhat less likely to be employed than non-migrants: 46% of the migrants were employed, in contrast to 50% of the non-migrants.

The results further show that migrants were less likely to be in wage employment (33% for migrants against 42% for non-migrants) and that they are more likely to be self-employed (10% against 6%). Still, wage-employment was the most prevalent type of work for both groups.

Are migrants less or more likely to be unemployed than non-migrants?

In terms of the expanded definition of unemployment (which includes discouraged workers), adult migrants in Khayelitsha/Mitchells Plain were more likely to be unemployed than non-migrants: 44% for migrants versus 36% for non-migrants.  Figure 1 shows these (and other) differences. 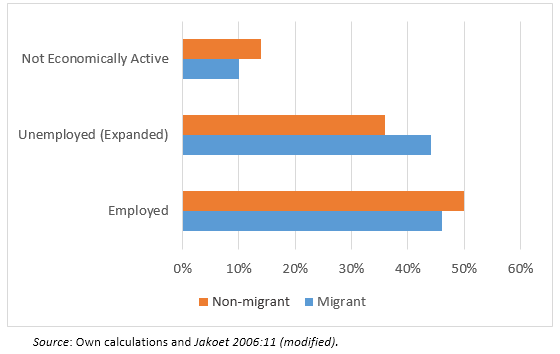 Are migrants less or more economically active than non-migrants?

Migrants in the Khayelitsha/Mitchells Plain area have a lower component of people that are not economically active (NEA):  10%, compared to 14% for non-migrants (using the expanded definition of unemployment). This is reflected in a higher labour-force participation rate[3] of migrants than of non-migrants. The difference is approximately four percentage-points, as shown in figure 1.[4]

The KMP survey was based on one magisterial district in the Western Cape, while other available studies focus on South Africa as a whole. A more sensible comparator would be the Western Cape province, for which data from Censuses 2001 and 2011 are available, as presented below in table 2. The results show the following:

The proportion of the migrant population that is economically active (working or wanting to work) has increased and has remained higher than that of non-migrants.

How do we make sense of all of this?

Part of the explanation for the higher rates of employment among migrants than for non-migrants and possibly for the increase in employment among migrants, is that migrants appear to have a greater tendency to create their own employment, i.e. start their own businesses. Although it is a small proportion of all forms of employment, both the KMP survey and the censuses show migrants to be significantly more likely to be self-employed than -non-migrants. Census 2001 shows migrants in the province to be twice as likely as non-migrants to be self-employed (4% vs 2%) (Ziehl 2016b). In the Khayelitsha/Mitchells Plain area the corresponding numbers were higher: 10% and 6%. Migrants from the Eastern Cape showed the highest rates of self-employment, namely 21%.

The higher rates of unemployment among migrants can be explained by a greater tendency to actively seek work. Census 2001 shows that the proportion of migrants that has taken active steps to seek work was double that of non-migrants (25% vs 12%). This was particularly the case when those born in the Eastern Cape are compared to non-migrants (34% vs 12%).

The explanation for the higher rates of labour force participation (or lower rates of ‘not economically active’) among migrants compared to non-migrants is contained in the discussion above. Given that they have made the decision to move to the Cape, presumably in pursuit of a better life, it is not surprising that migrants are more likely to want to work and to actively look for work, or be more industrious with self-employment, than non-migrants. Another possible explanation lies in the age profile of migrants. On the whole, they tend to be younger than non-migrants. Specifically, as shown in figure 2, the proportion of migrants in the 18 to 40 age categories is significantly higher than that of non-migrants. 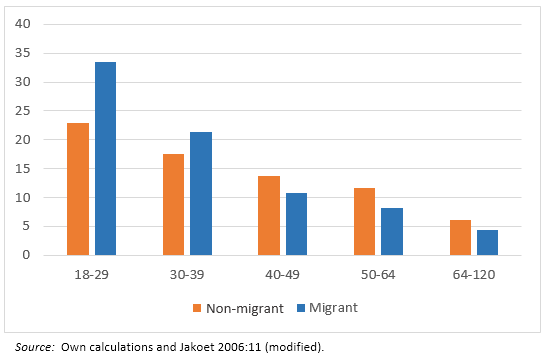 This pattern needs to be seen in conjunction with the family-related considerations. It is possible that young adults (20 to 40 years) have weaker family and community ties than older adults and that this makes them ‘freer’ to change their place of residence and work.

The fear is often expressed that migrants increase unemployment in urban areas. This article has reported research results showing that migrants to the Western Cape are more likely than locally born residents to be both unemployed and employed. This is because they appear to be more likely to be economically active and wishing to work than non-migrants. In addition, they appear to show greater resourcefulness through the creation of own businesses and thereby self-employment, than non-migrants.

The impact of migration on the level of unemployment, or the unemployment rate, of a particular area is a different, and multifaceted, matter. While it is possible that the effect could be to increase the unemployment rate,  a number of other factors and labour-market dynamics are also at play. These include the labour-market participation and employment-seeking behaviour of locally born residents, as well as the dynamics of new job opportunities. Migrants might displace other workers, but they might equally create jobs or fill new vacancies, also depending on skills and wages. Therefore, determining the impact of migrants on unemployment in a particular area empirically is more complex than one might suspect.

Naidoo N, Leibbrandt M & Dorrington R. 2008. Magnitudes, Personal Characteristics and Activities of Eastern Cape migrants: A comparison with other migrants and with non-migrants using data from 1996 and 2001 censuses. Southern African Journal of Demography. 11 (1): 29-66.

Ziehl SC. 2016b. The relationship between employment and migration –  the case of Khayelitsha/Mitchells Plain. REDI3x3 Working Paper.

[3] The ‘labour force participation rate’ (LFPR) is the number of people in employment or wishing to work as a proportion of all aged 15 to 64.

[4] For the strict definition of unemployment, the respective numbers are 33% vs 36%.

[6] This finding for Khayelitsha/Mitchells Plain does not correspond with that of Budlender who, using the strict definition, found (for South Africa as a whole) that migrants were less likely to be unemployed than non-migrants (25% vs 36%). On the other hand, it corresponds with the findings of Naidoo et al (2008) who use the expanded definition and show that 27% of migrants are unemployed compared to 24% of non-migrants (1996 – 2001).