The Budget’s fiscal stance: The non-cyclical element may be a cause for concern

Reads 22,299
Wynnona Steyn, 16 April 2013
It is estimated that less than half of the present main budget deficit of 5.7% is explained by cyclical factors. The remainder reflects a non-cyclical, structural component of the deficit. The increase in the structural budget deficit since 2008 may constrain the ability of government to sustain its present revenue and expenditure policies. An in-depth understanding of the structural component of the fiscal position as opposed to its cyclical element is important for sustainable long-term government financing and planning.

Kuben Naidoo has written an informative and concise article on the budget stance (The Budget: both the fiscal stance and ‘structural stance’ are sound, Econ3x3, 25 March 2013).  This note adds some analysis specifically with regard to the budget’s stance in terms of the structural deficit.

Given the present revenue constraints and the increasing demand for government services and infrastructure spending, a more in-depth understanding of the fiscal deficit in terms of its underlying, or structural, deficit position – as opposed to its cyclical features – is important for sustainable long-term government financing and planning.

A structural deficit[1] reflects a fundamental, long-term or underlying imbalance between government receipts and expenditure – as opposed to a budget deficit that results from short-term factors that are related to the business-cycle and, for instance,  repress government revenue, for instance. A structural deficit differs from a cyclical deficit in that the former is present even when the economy is growing at its potential, i.e. when there is no recession or cyclical downturn.

The cyclical behaviour (or the cyclical components) of the budget deficit are the reason why the budget deficit is considered to be an ‘automatic stabiliser’. In a recession, higher government expenditure and, especially, reduced tax payments by taxpayers – reflected in a widening deficit – have the effect of stimulating the economy and partially offsetting the general economic weakness; likewise the deficit tends to narrow during expansions, thereby moderating the expansion.

Distinguishing the cyclical and structural components of the present fiscal deficit

Any observed fiscal deficit figure typically reflects a combination of a cyclical component and a structural component. In evaluating an actual budget deficit, it is important to distinguish between these two components. (The structural budget deficit is derived by cyclically adjusting the budget figures.)

The present South African main budget deficit has been revised to 5.7% of GDP in the 2013 Budget. A portion of the present deficit is the natural outcome of increased government spending (as a percentage of the GDP) due to the continuous growth in the demand for public goods and services and, especially, reduced revenue receipts (as a percentage of GDP). The latter occurs when individuals and companies earn less and pay less tax – the result of the continued cyclical downturn in the economy since the global credit crisis of 2007/8.

It is estimated that less than half of the present deficit is explained by the shortfall of actual GDP relative to ‘potential GDP’, i.e. by the cyclical component of the total budget deficit. The remainder – more than half of the present fiscal deficit – reflects the structural budget stance, which is mainly driven by government expenditure that exceeds the long-term trend in tax revenue.

Figure 1 shows how the widening fiscal deficit after the global credit crisis (i.e. from 2008 onwards) is driven by both higher levels of government spending and lower tax revenue (as a percentage of GDP), relative to historical averages.

In the 2013 Budget, the main budget expenditure is estimated at 30.1% of GDP. This exceeds the expenditure averages since 2000 by 3.3 percentage points. As noted above, this appears to be a non-cyclical, structural increase. Tax revenue for 2012/13 is estimated at 25.2% of GDP, which is close to the average for 2000-2004 but is almost 2 percentage points below the averages attained during the commodity boom of 2004-2008. This shows a clear cyclical pattern in revenue, and a clear cyclical decline after 2008.

Figure 1: The change in the stance of fiscal policy in South Africa after 2008

Another way in which to consider and evaluate the deficit is to plot the fiscal deficit as a percentage of GDP against the output gap, i.e. the difference between the actual GDP and potential GDP. (The sign and size of the output gap shows whether the economy is in a recession (-) or in an expansionary (+) phase, and how far its output level deviates from a neutral position.)

In figure 2, the quarterly budget balance as a percentage of GDP since 2000 is plotted against the quarterly output gap in real terms for the same period. It illustrates how a smaller deficit usually is associated with a situation in which the actual GDP is above potential GDP, i.e. above the long-term trend in GDP – this is the cyclical effect of an upswing on the deficit. Likewise, an actual GDP that is below potential GDP (i.e. recessionary conditions) is associated with a higher deficit. A data point in the upper right of the chart reflects a stronger economy and the resultant improved government finances.

This diagram also demonstrates the stabilising outcome of the higher government spending and the reduced revenue that accompany a worsening performance of the economy.

The highlighted red square in figure 2 shows the 2012 quarterly average values of the budget deficit as a percentage of GDP against the real output gap.

Compared to similar quarterly ratios since 2000, it is evident that the South African budget deficit for 2012 (as a percentage of GDP) is well below the trend line, i.e. the deficit is unusually large.

Figure 2: The fiscal deficit in relation to the output gap 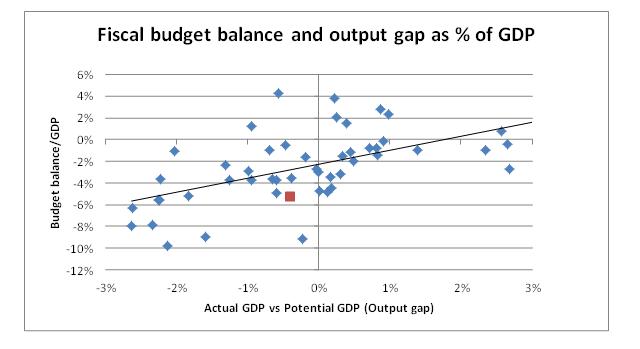 Conclusion: The structural component of the deficit is large

The evidence above suggests that the present deficit is relatively large, given the cyclical state of the economy (as measured by the estimated output gap). This implies that the longer-term, structural component of the budget deficit is quite large. This structural deficit component results primarily from an increase in government expenditure.

The evident increase in the structural budget deficit, as opposed to the cyclical deficit, may in future constrain government’s ability to sustain its present revenue and expenditure policies and control public debt relative to GDP.

[1] Editor’s note: The varied usage of the term ‘structural’ may confuse the reader. In the article of Naidoo it was used to refer to government expenditure that targets inequality and social and development initiatives, as opposed to the macroeconomic aspects of the budget stance. In this article it refers to the non-cyclical or long-term component of the budget deficit, i.e. here it is a macroeconomic concept, albeit a long-term rather than a cyclical one.

Steyn April 2013 The structural component of the budget FINAL.pdf
Print