Cooperatives: has the dream become a nightmare?

Reads 9,825
Johannes Wessels, 23 June 2016
Over the past 15 years Government has promoted cooperatives at national and provincial levels with the aim of enabling small producers to tap into mainstream economic activities. Tens of thousands of cooperatives were formed in processes with officials’ performance appraisals based on the number of new cooperatives being formed. A 2014 study in the Free State indicates a very low survival rate of cooperatives and little evidence of job creation. This accords with earlier findings of an EU-funded study at the national level.

With the aim of fighting unemployment, poverty and inequality, the promotion of cooperatives has been prominent in various policy documents and pronouncements. At an International Co-operative Conference in 2009, President Jacob Zuma summarised the rationale for the investment in cooperatives as follows: ‘Our call for broad-based economic empowerment highlights the cooperative form of ownership to benefit the whole community in a collective manner rather than developing an individual’; it was hoped that this would result in ‘decent work opportunities’, ‘sustainable livelihoods’, ‘increased agricultural production and productive land-use’ and ‘financially viable entities that can implement employment-intensive production schemes’ (Zuma 2009).

The National Development Plan notes that cooperatives have several benefits, for example they help small producers achieve economies of scale and establish linkages to markets and value chains, also in rural development projects (NPC 2012: 225; 228). They also promote economic transformation and black economic empowerment by facilitating ‘ownership and management of enterprises and productive assets by communities, workers, cooperatives and other collective enterprises’ (NPC 2012: 466).

Echoing the NDP, the government’s 2014-2019 Medium-Term Strategic Framework (MTSF) prominently mentions cooperatives as part of ‘radical economic transformation’ and observes that they will support excluded and vulnerable groups such as small-scale producers (MTSF: 11). This includes creating decent employment through inclusive growth and vigorously implementing BBBEE (MTSF: 21) and reducing the high levels of market concentration and monopolies (MTSF Appendix 4: 11).

A key initiative in this regard is the National Informal Business Upliftment Strategy (NIBUS), finalised by the Department of Trade and Industry in 2014. It clusters cooperatives together with SMMEs as the target of policy interventions. It sees informal businesses ‘graduating’ from survivalists to informal traders to informal micro-entrepreneurs to become, finally, cooperatives or companies. This policy is now being implemented by the new Department of Small Business Development.

This article is based on findings from a 2014 study of cooperatives in the Free State province to assess, inter alia, the success that has been achieved in promoting cooperatives (see Wessels & Nel 2016).[1] The research was funded by the International Labour Organisation at the request of the Department of Economics, Tourism and Environmental Affairs (Detea) in the Free State province. Detea wanted to determine whether the cooperatives have had a positive impact on unemployment, poverty alleviation and economic growth in key areas in the province.

Cooperatives in South Africa are registered formal entities – thus, they are not part of the informal sector. A cooperative enterprise is a generic form of business organisation (alongside sole proprietorship, partnership and incorporated forms). The Cooperatives Act (No. 14 of 2005) defines a cooperative as ‘an autonomous association of persons united voluntarily to meet their common economic and social needs and aspirations through a jointly owned and democratically controlled enterprise organised and operated on co-operative principles’. Moreover, it is unlawful to use the term coop or cooperative for any entity not registered as such.

Since 2002 Government has devoted billions of rand to promoting cooperatives. Apart from a Cooperative Incentive Grant of R350 000 per cooperative, funding was channelled to new cooperatives through SEFA, provincial development agencies, provincial departments of economic development, municipalities, as well as the Departments of Agriculture, Education, Social Welfare and others. If one adds the large numbers of officials that are involved in the promotion of cooperatives – provincial and municipal officials, SEDA staff, Community Based Workers and many more – to the cost of co-operative summits and visits to cooperatives in countries like Spain and Brazil, it will be evident that this initiative has been extremely well supported by Government.

The state of cooperatives in the Free State 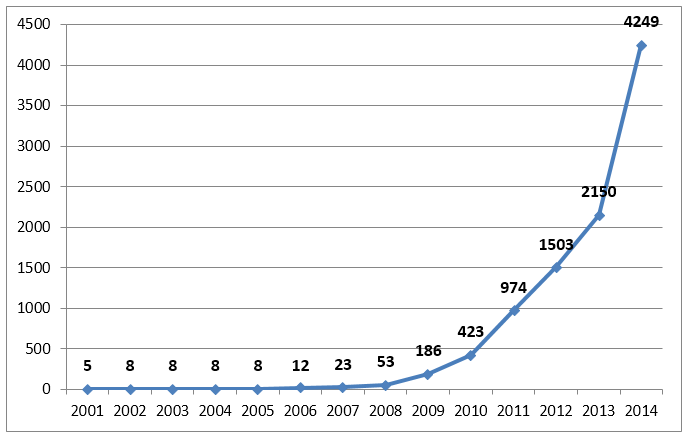 However, as was described in the European Union’s report, the registration of a cooperative did not mean that it was functional. Even in the CIPC register, a large percentage of cooperatives had only a physical address and no telephone number. Considering the importance of communication for enterprise operations, it was likely that cooperatives without telephone numbers were inactive.

The first phase of the research comprised an analysis of an integrated cooperative database developed from the records of the Company and Intellectual Property Commission (CIPC) and lists of cooperatives obtained from the Detea. The Department wanted a census to determine the situation of each cooperative. However, the research budget only enabled a survey (in the second phase) in the form of telephonic interviews with 220 cooperatives and (in a third phase) in situ interviews with 42 cooperatives. The DETEA preferred that all 220 telephonic interviews should be conducted with cooperatives in the Thabo Mofutsanyana District (where the erstwhile homeland of Qwaqwa is located).

Figure 2 displays the responses to the question of whether the cooperative was functional. Only 81 (37%) of the 220 cooperatives were considered to still be in operation, while 21% no longer functioned and 31% never got going at all. 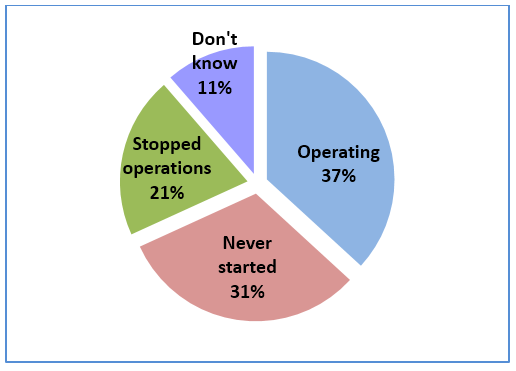 In the case of the 139 defunct cooperatives, we asked for the main reason that the cooperative had failed or had not started up successfully. Figure 3 portrays the responses to these questions. The reason most mentioned was state contracts that had been promised (or expected) but that did not materialise. A lack of business skills constituted a close second, followed by conflict between members of the cooperative.

Figure 3. Reasons for the failure of Free State cooperatives 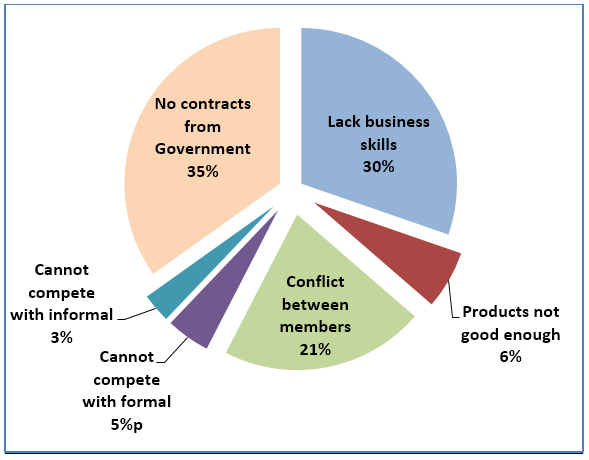 It is notable that members of the cooperatives considered promises of government contracts for services (e.g. office cleaning and the provision of food parcels for school-feeding schemes) as being crucial for success. This raises serious questions as to whether the members of the new cooperatives had really decided, voluntarily, to pursue business activities via a cooperative, or whether both the prospects of public sector contracts and the carrots of the Co-operative Incentive Scheme (CIS) were dangled in front of economically desperate people. This would mean that the cooperatives were state-induced and did not constitute enterprise formation on a voluntary basis – considered internationally as a basic principle in the cooperative movement.

The 81 cooperatives that were still operational were asked whether the formalisation of their business activities into a cooperative had helped them to increase their turnover and profitability from their previous informal trading or service activities. Only 13 indicated an increase in turnover and a mere two showed increased profitability. This rate of attrition implies that the Free State cooperatives were falling well short of contributing to the ‘engine of growth’ that the NDP foresees (see figure 4). 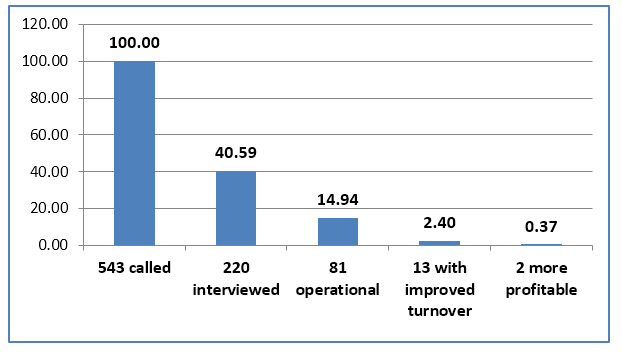 Not surprisingly, the objective of creating employment opportunities has not been realised either. The 220 co-operatives jointly had 1 987 members when they were established but this declined to 1 562 members at the time of the interviews. The majority of these no longer worked actively in the enterprise. Sometimes DETEA officials judged that membership as such was equivalent to employment having been created. This is an error of reasoning: non-working members of worker co-operatives are the equivalent of shareholders in companies. Of the 1 562 members of the cooperatives, less than 16% worked in the cooperatives, but without regular remuneration. At best, part-time, mainly unpaid work emerged from this exercise.

The vast majority of cooperatives were created through government initiatives. Westoby (2014) finds that Community Based Workers in the National Community Development Worker Programme (CDWP) and the Department of Social Development’s (DSD) Community Practitioner Programme (CDPP) all have the creation of one cooperative per month as a performance target. For Detea officials the establishment of new cooperatives was also part of their performance appraisal (Detea 2014). Therefore, the booming cooperative birth rate can be ascribed to a political and administrative urge rather than the result of desires of people in communities to voluntarily form cooperatives to pursue specific business objectives. In this process there was more emphasis on officials’ achieving their performance targets than their paying attention to basic entrepreneurial questions that should inform business creation. The question of whether a sole proprietorship, a partnership, a company or a cooperative would be the most appropriate business form was neither asked nor considered.

Government officials promoting the establishment of cooperatives did not consider the business potential in local value chains. In the Metsimahole Local Municipal area (Sasolburg and environment), for example, there was no evidence of cooperatives trying to tap into the petro-chemical value chains by making candles with wax. Likewise, in Metsimahole, agriculture is a negligible contributor to both GVA (gross value added) and employment, yet almost 50% of the 693 cooperatives in that district were established to pursue farming activities (with 106 targeting poultry production).

Lastly, little consideration was given to entrepreneurial space. Analyses of the Enterprise Observatory of SA (EOSA) of formal enterprises in 280 cities and towns in South Africa show little, if any, available entrepreneurial space for businesses that sell undifferentiated products and services – which is what most cooperatives try to do.

Ignore the evidence and throw more money at the problem

The research findings regarding cooperatives in the Free State confirm (statistically) a situation that was already well documented and known to government. Apart from the noted EU-funded report (Eising & Shenxane 2011), there is a 2009 Baseline Report on cooperatives in the Eastern Cape (ECSECC 2009). In 2010, in her presentation to the Parliamentary Select Committee on Trade and International Relations, the then Deputy Minister of Trade and Industry, Maria Ntuli acknowledges the high failure rate, mentioning also that only 132 of the then 22 030 cooperatives had submitted financial statements to CIPRO (now the CIPC). She said that ‘officials at all tiers of government have a limited understanding of cooperatives as a form of business’ and that there was ‘inadequate institutional capacity to deliver on cooperatives’ (Ntuli 2010).

Despite that knowledge, Government continues with the drive to promote cooperatives as an important strategy to overcome unemployment. The 2012–2022 Integrated Strategy on the Development and Promotion of Cooperatives of the Department of Trade and Industry (DTI 2012) promises more of the same, basically restating the standard objectives and means of support. This is also echoed in the 2014-2019 Medium-Term Strategic Framework (MTSF) that envisages a significant increase in the growth rate of the number of registered cooperatives and surviving cooperatives (MTSF Appendix 4: 26).

It is time for a comprehensive review of the impact of the strategy to promote cooperatives. The evidence to date indicates that it is a very costly programme that fails not only the policy objectives but the very hopes of the poor that have been ignited by the promoters of cooperatives.

Department of Trade and Industry. 2012: The 2012–2022 Integrated Strategy on the Development and Promotion of Cooperatives.

Ntuli M. 2010: Briefing on the Development and Support Programmes for Co-operatives. Presentation to the Select Committee on Trade and International Relations.

Wessels J. 2014a: Cooperatives in the Free State (2): An Implosion of Firms. Centre for Development Support, UFS.

[2] In the remainder of cases the telephone number was either no longer operational, belonged to a person who knew nothing about the cooperative or who was only acquainted with someone involved in the cooperative.