Day labourers and the role of foreign migrants: for better or for worse?

Reads 23,503
Derick Blaauw, Anmar Pretorius, Rinie Schenck, 17 May 2016
Foreign migrants often enter informal employment as day labourers. They compete with South Africans for jobs in this curb-side labour market. Three surveys of day labourers working in Tshwane between 2004 and 2015 reveal two important tendencies. First, the foreign-migrant component has increased from 12% to just over 55% in 11 years. Secondly, the wages and the level of poverty of both foreign and South African day labourers have worsened in the same period.

In the face of grim prospects of formal employment in the South African economy, foreign migrants, whether illegal or authorised,[2] are finding the informal economy to be an increasingly important source of economic opportunity and income. Crush (2011:16) sums up the situation as follows: ‘The growth in irregular labour migration has been accompanied by growing informalisation of migrant labour employment. Before the 1990s, most labour migrants were employed in the formal sector. Since 1990, labour migrants have begun to work in the unregulated informal economy’.

Foreign migrants often end up in informal employment such as working as day labourers because there are negligible barriers to entering this market. Once they have joined the informal day-labour market, these migrants work alongside their South African counterparts and offer their services to employers operating in the formal economy. A distinctive aspect of day-labourer employment is that it is informal in the sense that the labourers do not have employment contracts or benefits, even though they work for employers who are part of the formal sector. Day labourers are mostly paid in cash, are vulnerable to exploitation and face systemic job instability (Theodore et al., 2015). [Note that most day labourers are not part of the informal sector, which comprises people owning or working in single- and multi-person informal micro-enterprises that are not registered for tax. Day labourers are part of the informal economy, though.[3]]

The questions are whether the curb-side earnings and dynamics of foreign and South African day labourers differ and whether these have changed over time. This article reports selected findings from a comprehensive long-term project in order to survey and analyse the day-labour market in South Africa. Having conducted three different surveys (including a national survey) on day labourers in Tshwane over a ten-year period, we can make two important observations: first, the foreign component of the day-labourer community has increased from 12% to more than half (55%) within 11 years; secondly, the economic situation of both local and foreign day labourers have worsened.

In this article we report on the comparative Tshwane findings specifically, but refer to national-level findings where relevant and available.

The number and share of foreign day labourers in Tshwane

At the same time, the composition of the Tshwane day-labourer workforce in terms of national origin has changed markedly. Figure 1 shows how, while the share of South African workers has been dropping dramatically since 2004, workers from Zimbabwe and Mozambique have grown to significant proportions of the day-labour market. Zimbabwe supplies the largest number of foreign nationals to Tshwane’s day-labour markets, providing 8%, 33% and 50% of the day labourers in 2004, 2007 and 2015 respectively. Mozambique is the second-largest source of labourers. 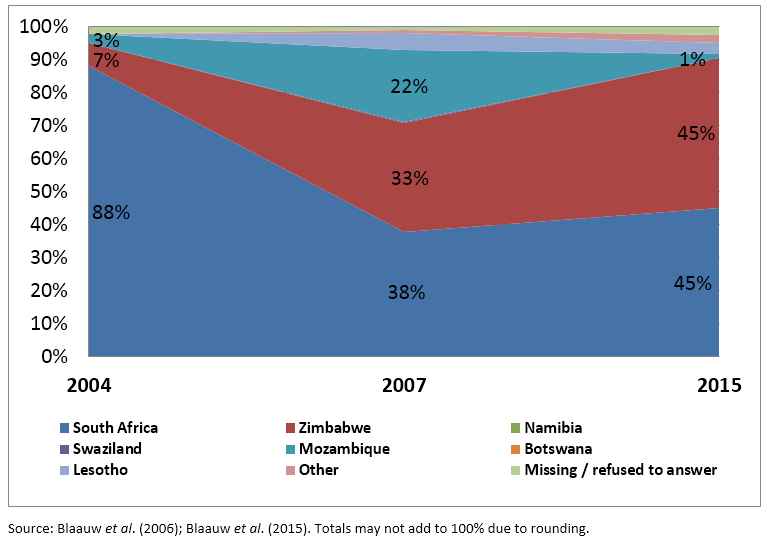 When one considers the foreign component as such, it is clear that its composition has changed significantly. In 2007, 54% of foreign-born day labourers came from Zimbabwe, 35% from Mozambique, 9% from Lesotho and 1% or less from Swaziland and Namibia. By 2015, Zimbabweans made up 89% of foreign-born day labourers in Tshwane. The largest change was the virtual disappearance of the Mozambican contingent, whose numbers have dwindled to 1%. The 2015 shares of Lesotho (6%) and Malawi (4%) are of minor importance.

The influx of foreigners onto South African turf has not been well received. The prevailing ‘curb-side’ view at the time of the 2007‑08 survey was that foreign day labourers were willing to work for much less than their South African counterparts. One South African day labourer was quoted in 2008 as saying ‘these makwerekweres are spoiling the employers by charging R20 per day when we charge R100’ (Schenck et al. 2012). [‘Makwerekwere’ is a local slang word for foreigners, especially illegal immigrants.]

Blaauw et al. (2012) reveal that this was partly true for Tshwane but not for South Africa as a whole. Table 1 compares income indicators of South African and Zimbabwean day labourers in South Africa (and for Tshwane in particular) for 2007-08.

Countrywide, the average income values were actually higher for foreign workers than for the locals. The gap between the two groups of workers varied between 5% and 25% and was statistically significant for four of the five income indicators (Blaauw et al. 2012). However,  in Tshwane Zimbabweans did earn less than South African day labourers in 2007-08. Nevertheless, the difference between their earnings was smaller than popularly alleged (even though it was statistically significant on most indicators).

This gap was not to endure. The 2015 survey for Tshwane reveals that, with some small differences, wages for foreign and South African day labourers in Tshwane were approximately equal. In addition, these wages had become extremely low. When they were able to find work, day labourers’ nominal daily earnings in Tshwane varied from R120 to R150, which amounts to between R75 and R94 in 2007 prices. The average hourly wage for foreigners was R22.60 and for South Africans just over R24 – a gap that is not statistically significant (even at the 10% confidence level).[4]

The data from the three surveys suggest that earning poverty-level wages has become more pervasive in the Tshwane day-labour market. The 2004 survey suggested that between 79% and 96% of day labourers (depending on the poverty line used but irrespective of nationality) earned incomes that positioned them and their dependents below the poverty line.

Declining daily earnings and increasing poverty levels characterise the situation of the day labourer in Tshwane. At the same time, the number of day labourers – and of foreign migrants in particular – has increased dramatically. While only dealing with one metropolitan area, our findings suggest that rising numbers of foreign-migrant day labourers are putting increasing pressure on a limited, or shrinking, number of casual/informal job opportunities with formal-sector employers – which may reflect a slow-growing South African economy. It probably is no coincidence that xenophobic violence tends to erupt in areas where many foreign migrants (including day labourers) live.

The broader phenomenon of day labourers and migrant workers in South Africa and neighbouring SADC countries remains perplexing. It appears to reflect highly complex structural unemployment problems that cannot readily be addressed by, for example, providing more and better skills training. There simply is a dearth of suitable job opportunities. A cyclical or sustained improvement in the South African economy might help to provide more formalised job opportunities for migrants and local workers alike. However, what is needed is, for example, a more entrepreneurial culture to take root across the region, with more enterprising individuals and small and large investors stepping up to take their chances by supporting promising business ideas. In this way more secure job opportunities might become more readily available for those currently dependent on day-labouring and such forms of badly-paid informal employment.

Blaauw PF, Schenck CJ & Pretorius AM (2015). ‘The times they are a changing’: The changing nature of day labouring in South Africa’s informal economy, Draft paper presented at the Biennial Conference of the Economic Society of South Africa, Cape Town, September.

Schenck R, Xipu L & Blaauw D. (2012). What happens to those long hours next to the road? An exploratory study of three informal hiring sites in Tshwane, Social Work/Maatskaplike Werk, 48(1):35- 46.

[1] The authors wish to express their appreciation to the editor of Econ3x3 for valuable comments and suggestions regarding this article. All omissions and mistakes remain our own.

[3] The informal economy comprises all informal-sector employment plus those who work in the formal sector without being covered by formal arrangements such as employment contracts and benefits (i.e. they all are informally employed).

[4] An improved methodology, using the employment history of a day labourer in the previous week and which enables one to calculate a more accurate hourly income, was used in 2015.

Professor, University of the Western Cape