Do poor children really benefit from the child support grant?

Reads 36,492
Marisa Coetzee, 10 July 2014
The child support grant has been praised as one of the government’s most successful anti-poverty programmes. The rapid extension of the grant increases the importance of ascertaining its effectiveness: does the child support grant make any real difference to the lives of the millions of children who receive it? Using the 2008 NIDS data, a recently published study identifies a significant positive impact on recipient children’s health, nutrition and education as a result of receiving the grant.

The child support grant (CSG) was introduced in April 1998 and involves a cash transfer to eligible caregivers (parents, grandparents, guardians, etc.) who are identified as deprived by a means test.[1] The grant has been praised as one of the government’s most successful anti-poverty interventions. This praise seems to be justified in the light of the high take-up of the grant: at the end of March 2014 there were more than 11 million child beneficiaries. Furthermore, various studies have pointed to the significant role played by the CSG (as well as the state old age pension) in reducing the number of poor people in post-apartheid South Africa (see, for example, Woolard and Leibbrandt 2010: 17).

However, the rapid expansion of the child support grant (from approximately 20 000 children in 1998[2]) increases the importance of ascertaining its effectiveness in improving the lives of the children at whom it is aimed. Although previous studies have investigated this question (for example, Agüero et al. 2009), the recent expansion of the eligibility criteria to include all children younger than 18 years, as well as the resultant increases in central government spending on the CSG, signals the need for an updated evaluation of the effectiveness of the grant.

So the question is: has the child support grant system had a significant impact on the well-being – e.g. the education, nutrition and health – of children whose caregivers received the grant?

How does one identify the impact of the CSG on children’s well-being?

It is not easy to get a conclusive answer regarding the effectiveness of the grant. Ideally, one would like to compare the well-being of children who receive the grant (‘recipient’ children) to that of a control group of children who do not receive the grant but who are like the recipient children in all other respects. However, it is very difficult to find such a control group, since all the reasons for applying for the CSG (for example, low income and unemployment) are the same factors which determine the well-being of children.

This article reports results from a recently published paper (Coetzee 2013) which suggests a way around this problem. To estimate the impact of the child grant on the well-being of children, it uses the fact that there has been a variation in the take-up of the grant. Caregivers have to apply for the grants, which take time to be processed by government, or for some reason they delay applying for the grant after the birth of a child. Accordingly, two eligible children of the same age may not have received the CSG for the same proportion of their lives. Such differences enable one to uncover the impact of the CSG on the well-being of the children.

The data is from the first wave (2008) of the National Income Dynamics Study (NIDS), a nationally representative household survey.

Characteristics of households and caregivers of children receiving the grant

Table 1 shows the characteristics of households and caregivers of children who have been receiving the grant for different proportions of their lives. The characteristics of the households appear to be very similar for all three groups of recipient children. They all are from poor households where less than a fifth of working-age adults are employed and with limited access to basic amenities. 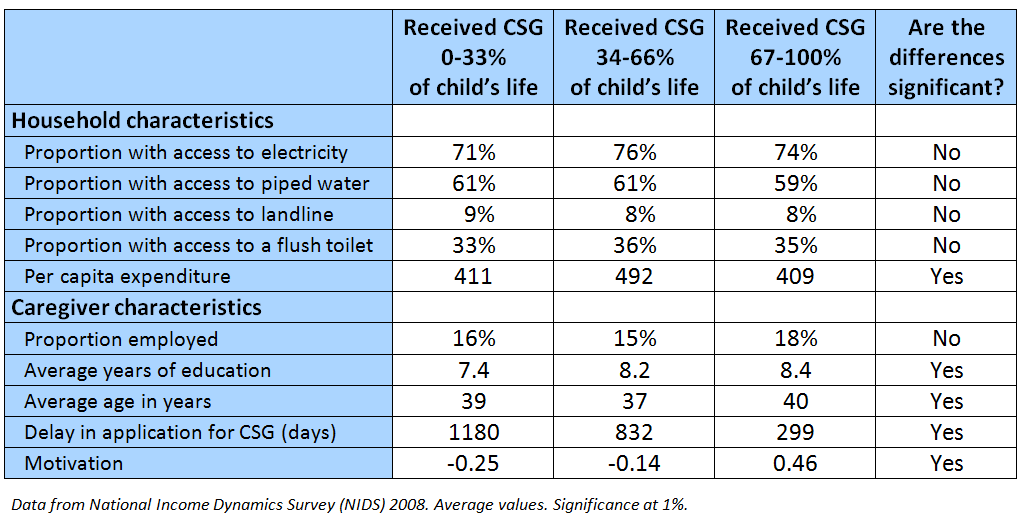 Estimating the impact of the child grant (CSG)

This is done by generating a variable that captures the differences in the motivation of the caregiver (see Coetzee 2013 for more detail). Table 1 includes this measure of motivation.[3] Caregivers whose children have received the CSG for a larger proportion of their lives have higher motivation scores than caregivers whose children have had access to CSG benefits for a smaller proportion of the children’s lives. This variable is then used, together with others, in the formal statistical estimation of the impact of the CSG.

The well-being of children is measured in terms of the following:

2.  Educational attainment:
–  a child’s school enrolment; and
–  the number of times a grade has been repeated.

Together these indicators provide a composite picture of children’s well-being. The receipt of the CSG is measured as the percentage of a child’s life that he or she has received the grant (via the caregiver). Other factors that are taken into account are observable differences between children, their home circumstances and their caregivers’ characteristics, including motivation (compare the variables in table 1).

This then allows one to identify the effect of receiving the child grant on the well-being of children: one can discern how receiving the grant for different proportions of their lives affects their expected health, nutrition and education outcomes. For example, one can determine the difference between the expected school performance of a child who has received the grant for 40% of his or her life versus a child who has received it for only 30% of his or her life.

The research finds a significant positive effect on the well-being of children in the survey (all were aged 14 and younger, the cut-off age for the grant in 2008). These positive effects are in the form of an increase in children’s height-for-age, an improvement in children’s progress through the school system, an increase in the household’s expenditure on food items and a decrease in expenditure on adult goods.

More specifically the analysis reveals the following average effects on a child who had received the grant for 10 percentage points of his or her life longer than others:

In general the strongest effects appear to be obtained when the child grant is received for at least 30%-50% of the child’s life.

Although the size of the impact of the grant reported above appears small, the results should be interpreted in the context of the relative size of the cash value of the CSG. In 2008 the child grant was R210 per month, compared to total household expenditure of around R2 300 per month, on average, for households that were receiving the grant. In addition, the improved outcomes are associated with an increase in the grant receipt period of only 10 percentage points of the life of a child: it compares children (14 and younger) who were living in similar circumstances but were ‘exposed’ to the grant for different proportions of their lives, e.g. 40% as against 30% – a relatively short time difference. (In other words, the results reported above are not about receiving the grant compared to not receiving it at all.)

Taken in this context, it is clear that there are significant positive benefits to receiving the CSG and the results are not as small as they appear at first. Therefore, while one cannot establish to what extent the money from the child grant is spent specifically on improving the well-being of children, there is little doubt that the child grant does have a significant  positive influence on the well-being of children in poor households.

Nutritional development and education is critically important for the well-being but especially the future of children – specifically their future employment and earnings potential. The results from this study confirm the importance of the child support grant (CSG) as a tool to alleviate poverty and promote human development, also contributing to an eventual decrease in inequality in South Africa. The CSG is an important long-term enabling mechanism.

[1] Currently the means test is set at a monthly income of R3 100 for single and R6 200 for married caregivers. At the time of the NIDS 2008 survey, the means test was at R800 household income per month in urban areas and R1 100 in rural areas.

[2] The eligible age for receiving the grant has systematically been increased to accommodate more children each year. The number of recipient children has correspondingly increased from approximately 20 000 children in 1998, to over 11 million  children in 2014 (SASSA 2008). Samson et al (2008) calculate the take-up for 6 year olds as being approximately 10% in 2000 and approximately 63% in 2005.

[4] The average household size for the sample of grant recipient households is 6.6.