Reads 9,371
Michael Aliber, 2 August 2017
The dominant perspective on the economic situation of the former homelands is that long-term, deliberate neglect has left a durable legacy of poverty and stagnation. While this may be largely correct, there is also evidence to suggest that the former homelands are dynamic. This article presents some evidence on population, employment and unemployment, in particular through a focus on the evolving nature of the linkages between former homeland towns and their rural environs.

The prevailing perspective on the economic situation of the former homelands is that the long-term, deliberate neglect of the reserves/homelands/Bantustans, has left a legacy of poverty and stagnation. Moreover, the legacy of this neglect is so stubborn as to defy current attempts to change it.

According to the 2006 National Spatial Development Perspective (NSDP), South Africa’s space economy ‘represents a dualism with two overarching spatial categories: areas of national economic significance with high population densities and high numbers of people living below the minimum living level; and areas with low economic activity and low levels of demonstrated economic potential with high numbers of people living below the MLL [minimum living level]’ (Presidency 2007: x). The latter describes the former homelands. The NSDP’s prescription for these latter areas was to offer them basic services and, where possible, facilitate economically-beneficial migration to areas of ‘national economic significance’ – meaning the urban core.

While this characterisation may be largely correct, there is also evidence to suggest that in some ways the former homelands are dynamic, and in fact more dynamic than commercial farming areas. To its credit, the National Development Plan noted: 'There are … signs of economic vibrancy in parts of the previous homelands, in sectors such as retail, transport and construction, as increased state grants have expanded local circulation of money. These successes need to be built on and new opportunities explored…' (NPC 2012: 264)

Background: historical thinking about the reserves and rural-urban linkages

The relationship between rural and urban development was of concern to South African policy makers for much of the 20th century. The Fagan Commission of the late 1940s, for instance, concluded that it would be ‘…utterly impossible to put the Native population which is already outside the Reserves, back into the Reserves, or even to keep the whole of the increase there in future’ (quoted in Horrell 1959: 3); and also that the migratory labour system was economically problematic: ‘if the migratory system prevents the Native from becoming a good farmer, it also makes him a poor industrial worker…’ (quoted in Horrell 1959: 2-3). Taken together, what was implied was that solutions to the challenges of agricultural/rural and industrial/urban development were mutually dependent.

The Tomlinson Commission reached similar conclusions, but also surmised that part of the solution to the development of the reserves was to promote urban development within them. While this could be dismissed as merely an attempt to justify the doctrine of separate development, it is arguably one of the more curious legacies of the Tomlinson Commission, namely the idea that the ‘26 European villages’ then existing within the Transkei should be converted into ‘Bantu towns’ and in so doing become the nuclei of the Transkei’s urban development, and thus of its broader economic development. One could argue that, by design or otherwise, this is more or less what happened.

The idea of promoting rural development in part through rural-urban linkages re-emerged in later years, for example with the proposal in the 1980s to establish ‘Rural Service Centres’. A Rural Service Centre should, among other things, ‘provide a range of essential retail, agricultural, community and government services to the people in its area,’ and ‘be the hub of rural life, and as such should be a diffusion point for new ideas and innovations…’ (Tapscott et al. 1984: 2-3). In more recent years the Department of Rural Development and Land Reform has also returned to this theme, and in particular by way of its ‘Revitalisation of Rural Towns and Regions in South Africa’ programme.

The findings reported here derive from a study (Aliber et al. 2017) which involved an analysis of secondary data as well as three case studies, namely of Peddie in the former Ciskei, and of Ngcobo and Mthatha in the former Transkei.

A number of Statistics SA datasets can be used to ascertain trends over time and space regarding demographic profiles, labour-market participation, and household income and expenditure. These include the population census (not least Stats SA’s data for the 1996, 2001 and 2011 censuses according to the 2011 ward/municipal boundaries), the Income and Expenditure Survey of 2010/11, and various editions of the Quarterly Labour Force Survey.

The challenge is that most datasets are disaggregated in a fashion that does not quite allow the comparison we want to make. Either data are disaggregated according to legal or administrative boundaries (e.g. electoral wards or local municipalities), which only partially conform to the boundaries between former homeland and other areas; or they are given according to Statistics South Africa’s settlement types,[1] where ‘urban’ can mean either towns within the former homelands (e.g. Mthatha, Butterworth, etc.), or outside them (Queenstown, East London, etc.). We have generally been forced to make do with coarse approximations. The findings from various comparisons can be summarised as follows.

Over the 10 or 15 years leading up to 2011, the overall population size of the two former homelands remained more or less static. However, there were major demographic shifts within the former homelands from rural areas to towns, to such an extent that rural areas tended to depopulate. This can be seen in the 3rd and 4th columns of figure 1: between 1996 and 2011, the population of the rural parts of these former homelands declined by 106 000 people, or 3.4%, while the urban parts of the former homelands increased by 157 000 people, or 35%. Likewise, the populations of Buffalo City Metropolitan Municipality (encompassing East London) and Nelson Mandela Bay Metropolitan Municipality (encompassing Port Elizabeth) increased by 10% and 19%, while the populations of towns within commercial farming areas also increased (by 14%). 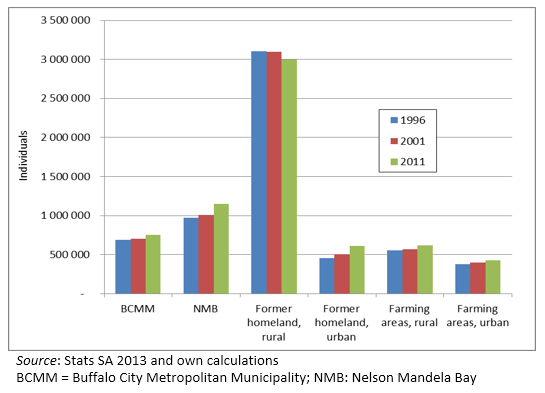 The demographic profiles (e.g. age structure) of towns within the former homelands have come to strongly resemble those of the cities outside of the former homelands, suggesting that these towns increasingly are part of the same rural-to-urban migration process that prevails more broadly.

Over the 10 or 15 years leading up to 2011, there was a degree of convergence of unemployment rates between former homeland and other areas, meaning that the two former homelands improved more quickly than other areas.

But, in terms of labour markets, a significant increase in employment levels within the former homelands is more impressive, and perhaps more important, than the decrease in the unemployment rates. Figure 2 shows the changes in employment levels between 1996 and 2011. The number of employed people in both the rural and urban parts of the former homelands increased by 50% – versus 16% and 19% for Buffalo City and Nelson Mandela Bay. Perhaps as surprisingly, employment in both the rural and urban parts of commercial farming areas also increased significantly (32%).

Therefore, although it is true that rural communities in the former homelands are more dependent on social grants than other communities, it is still the case that 56% of aggregate household income derives from employment, versus 35% from grants and 9% from other sources. 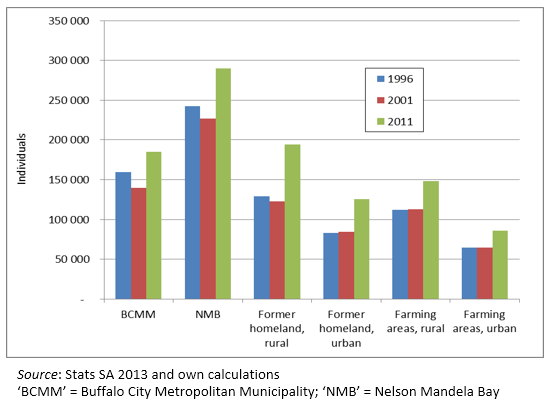 Fourthly, within these former homelands, there is a concentration of employment and self-employment in a few sectors, namely community services (approx. 100 000), retail trade (85 000) and construction (66 000[2]). Less than 25% of these jobs are in the informal sector. While trends over time are difficult to establish, it seems that construction and retail in particular are growth sectors. This in turn can be linked to household expenditure patterns, including investment expenditure; in 2010, households living in the rural parts of the former homelands collectively spent R541 million on home building and improvements.

Interactions: the evolution of rural-urban linkages in the former homelands

Fieldwork in Peddie, Ngcobo and Mthatha bears out that, over the past 30 years or so, a higher degree of interdependence has arisen between rural areas and towns within the former homelands of the Eastern Cape. For instance, the rise of the transport sector has brought village-dwellers into much closer proximity to the towns, which has created jobs in the transport sector as well as more opportunities for livelihoods in the retail sector; at the same time it has contributed to the reduced importance of agriculture. Together with the clustering of government and private sector services in town (e.g. healthcare, social grants administration, and banking), and the decline in self-provisioning through small-scale farming, towns have become much more the centre of rural villagers’ economic lives than was the case 30 or even 20 years ago.

At the same time, rural households in the former homelands are inclined to devote a relatively large share of their total expenditure to construction – which translates into construction’s being one of the larger employment/self-employment sectors within the former homelands. Neither is it a coincidence that a very large share of enterprises in former homeland towns are hardware stores. To pick up the full ramifications of this requires more research, in particular to fully appreciate the economic implications of how the materials are sourced.

While it is difficult to pinpoint an ultimate cause of these changes, key ingredients include: the enormous growth of the taxi industry; the expansion of commerce and broadening of economic participation in commerce (including formal and informal trade) in the towns; and the increased dependence of rural households on purchased food.

These changes have not all been favourable to local residents, however. From the late 1990s, much of the retail sector has been taken over by non-South Africans or corporate chain stores, meaning that fewer local residents derive a livelihood from it. In addition, drug problems and crime are commonly associated with the increase in youth unemployment in towns. Also, greater mobility is a double-edged sword: the rise of the taxi industry brings rural dwellers closer to town, but it also makes it easier for people to access other towns, including towns outside of the former homelands, and spend their money there.

There are related missed economic opportunities. Households in the former homelands devote a large share of their total expenditure to food and beverages – yet it would appear that a relatively small share of this food originates from these same rural areas (which could have stimulated local economic activity and employment in rural areas). The notable exceptions – for example, in Peddie most of the meat sold in the butcheries originates from local black farmers – merely accentuates this fact.

The former homelands remain relatively poor and blighted by high levels of unemployment. And yet, they are not static, undergoing change not least in terms of urbanisation and the economic relationship between rural areas and towns. While it is true that social grants are an important aspect of this emerging dynamism, wage income nonetheless dominates. The critical question is, how can this dynamism be accentuated and sustained?

Horrell M. 1959. The Economic Development of the ‘Reserves’: The Extent to which the Tomlinson Commission’s Recommendations Are Being Implemented, Fact Paper 3, Institute of Race Relations.