Is the growth of labour productivity in manufacturing a good thing?

Reads 9,791
Neil Rankin, 27 February 2018
Labour productivity grew substantially in the first twenty years of democracy, but is this unequivocally good? Much of the increase has been driven by changes at the firm level. Smaller firms’ average labour productivity increased more than that of larger firms. This seems to reflect changes in the composition of firms and jobs – smaller firms and low-productivity jobs appear to be vanishing. This is worrying because these are the type of jobs we need to reduce unemployment. 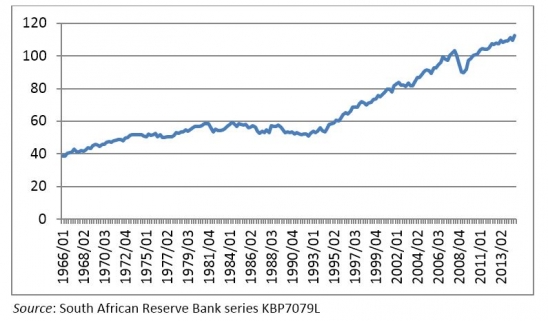 It is worth understanding what has driven this growth in labour productivity, particularly given high unemployment during this same period of predominantly low-skilled and thus less productive individuals.

A recent REDI3x3 working paper (Rankin 2016) examines the relative importance of each of these three explanations for the doubling of labour productivity in manufacturing in the 20 years since 1994. The results are summarised here.

Possible explanations for the high growth in labour productivity 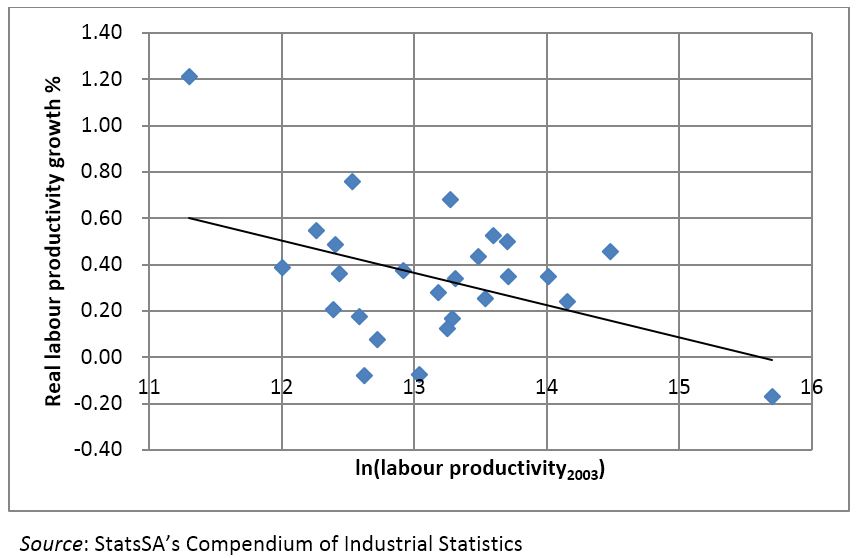 Such changes occur within firms. To investigate changes at firm level, the research aggregates 11 firm-level surveys and investigates changes between firms of different sizes.

Changes in labour productivity amongst firms of different sizes 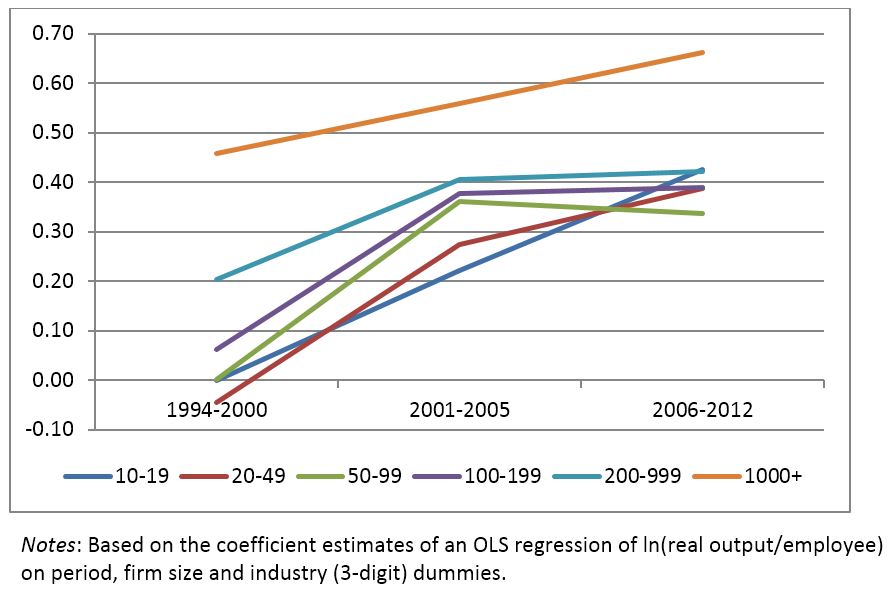 The research explores what might have been driving these changes. One obvious explanation could be that these smaller firms were becoming more capital intensive – replacing workers with machines. But this is not the case. Instead, it seems like average real wages in smaller firms were rising. Two types of mechanism could cause this: low-skilled workers were being retrenched or being replaced by higher-skilled workers; or small firms with many low-skill workers were closing.

What might be driving the exit of small firms and low-productivity jobs?

Unfortunately the available data does not allow one to investigate whether low-skilled workers were being replaced by high-skilled workers within firms. However, the data does allow some analysis of firm exit. The paper suggests two possible factors.

First, it seems that there is a link between the industrial bargaining structure within an industry and the continued survival of small firms. In the sectors where they have been established, bargaining councils are mandated by law to set wages for all workers and companies in a particular sector. The analysis suggests that, in industries with active bargaining councils, smaller firms are more likely to exit than the bigger firms. This confirms research by Magruder (2012) that indicates that bargaining councils cause lower employment in small firms in South Africa. Due to the way in which the membership of bargaining councils is constituted, they are likely to set wage rates that more closely reflect the preferences of larger firms (and their workers) than those of smaller firms. While smaller firms are legally able to apply for exemptions from the wage rates if they are too high, these are temporary and usually only granted if a firm is struggling financially. As a result, actual wage levels often are not suited to the operating position of smaller firms in an industry.

A second possible explanation is that, when faced with increased import competition, smaller firms have less room to adjust low-skilled wages (due to the constraints placed on wages by bargaining councils). Consequently they have only two options: change the composition of their workforce by employing more higher-skilled individuals, or close down (exit the industry) if they cannot.

Labour productivity in the South African manufacturing sector rose substantially in the first twenty years of democracy. At the aggregate level this may seem like a good thing. But the mechanisms driving this growth are less desirable. This growth appears to be the result of fewer work opportunities for low-skilled and low-productivity workers, particularly in smaller firms. This is worrying since South Africa needs to create more of this type of job to substantially reduce the unemployment rate – it is predominantly the low-skilled who are unemployed.

[1] This analysis involved the decomposition of the growth of labour productivity. For more detail, see Rankin (2016).