How effective is VAT zero rating as a pro-poor policy?

Reads 17,267
Ada Jansen, Estian Calitz, 20 July 2015
In most countries with VAT, certain goods and services are zero rated to alleviate the tax burden on the poor. However, this may not be the most cost-effective way of helping the poor. We investigate the appropriateness of the products currently zero rated and the impact of this on the poor, the implications for tax revenue were it to be removed, and the contribution to poverty relief of zero rating compared to targeted social transfers.

South Africa introduced a broad-based value-added tax (VAT) on 30 September 1991. This was in line with the widely held view (at the time) that a broad-based consumption tax would produce a more efficient tax system and improve revenue collection. Since the poor generally spend a greater proportion of their income on consumption goods than people who are more affluent, such a tax places a relatively greater burden on the former (i.e. it is a regressive tax). To counter this, some goods have been zero rated, which means that a zero VAT rate applies to certain basic products. This reduces the burden of the tax on low-income consumers and improves tax equity. In ensuing years a few additional items have been added to the zero-rated list.[1]

With the basic VAT structure having been in place for more than twenty years, an assessment of the VAT structure is in order. First, it is likely that the consumption patterns of the poor (and others) have changed. Secondly, many government programmes aimed at poverty reduction and income redistribution have been introduced. (Most operate via the expenditure side of the government budget rather than the revenue side.) Notably, various social transfers – targeted relief to vulnerable groups – were introduced or extended.

This article reports on a recent assessment of VAT zero rating in South Africa (Jansen & Calitz 2015). We analyse the appropriateness of the items currently being zero rated and whether or not more (or different) items should be considered for zero rating. We measure the potential impact on the poor if zero rating were to be removed, as well as the tax revenue implications of such a change. Finally, we explore the net fiscal result of possibly replacing VAT zero rating with a targeted income support programme for the poor.

The economic literature provides some theoretical guidelines on the properties of a good tax system. One dimension is that the tax should be efficient, i.e. it should not cause too many distortions in the economy. For VAT, better efficiency may be achieved if higher rates are levied on goods where consumption is unlikely to respond much to price rises due to the VAT (i.e. goods for which the demand is relatively less responsive to the VAT-inclusive price); likewise, this calls for lower VAT rates on goods that consumers readily can choose to consume less of in response to higher VAT-inclusive prices.[2] However, since the poor consume relatively more of the first type of goods (compared to high-income households), this may place a greater tax burden on poor households. The more efficient tax will be a more regressive tax.

Thus policymakers should also give consideration to tax equity, i.e. how equitably the VAT burden is distributed amongst consumers. Since the differentiated rates suggested by theory will have regressive distributional effects – and increase administrative complexity – a single rate has been preferred as a second-best, pragmatic option.

A single rate system still allows the option of zero rating. While the zero rating of some goods produces a more equitable VAT – thus reducing inequality – it may also be seen as being important as an effective instrument to combat poverty. However, this is not so. Goods that are zero rated are consumed across the board by all consumers (poor and rich). This implies that rich taxpayers receive a greater monetary benefit (since they spend more on these goods in absolute rand terms).[3] Thus zero rating is not a very effective way of improving the position of the poor – it costs too much in terms of benefits that accrue to the rich.

This raises the question of whether there are more effective ways of alleviating the plight of lower-income groups, for example, by using income transfers rather than continuing with a measure (VAT zero rating) that is less cost effective. Do transfers provide more ‘equity bang for the buck’ than VAT zero rating?

Implications of the spending patterns on zero-rated items

We consider the spending patterns of households across the income distribution using recent data from Statistics SA.[4] This gives an indication of the distributional implications of the consumption of zero-rated items by poor and rich households. Knowledge of the spending on zero-rated goods will also aid us to determine the cost of zero rating to the Treasury in terms of the lost taxes not paid by the richer households). 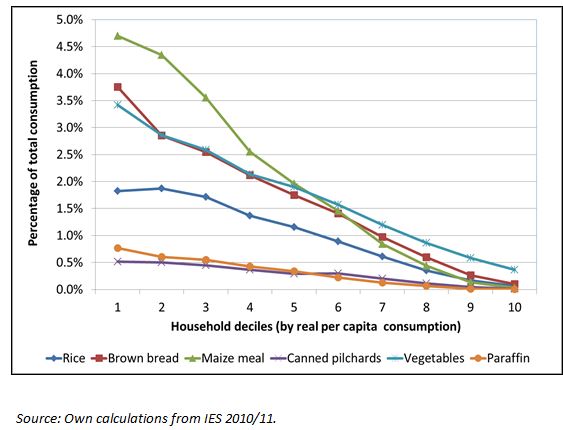 Should the list of VAT zero-rated items be amended?

Given that the rich gain more than the poor in absolute terms in the current VAT system, an important question is whether VAT zero rating should be retained. Alternatively, should we consider reducing, or changing, the list of zero-rated items? To answer this question we use a method first applied by Fourie & Owen (1993), namely selection according to the ‘weighted net-equity gain ratio’ (WEGR). The weighted equity-gain ratio (for a product) is calculated as the square of the proportional share of consumption by the poorest ten per cent of households, divided by the proportional share of consumption by the richest ten per cent of households. (The benefit to the poor is squared to give it more weight in selecting goods for zero rating.) Items with the largest ratios make the biggest contribution to VAT equity when zero rated. Table 1 shows the food items with the highest weighted equity-gain ratios (WEGR) as well as their current zero-rating status. Maize meal, brown bread and sorghum beer have extraordinarily high values, indicating their importance for poor households. 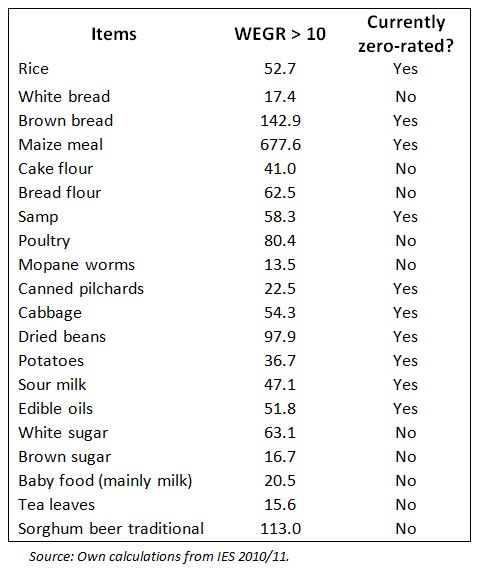 Of the twenty items with relatively large ratio values, only half are currently zero rated. If VAT zero rating remains the preferred policy choice, there is reason to revisit the list of zero-rated items: removing some, perhaps adding some (see Jansen & Calitz 2015 for more detailed proposals).

Alternatively, one can compare the benefit of VAT zero rating for poor households to other forms of targeted assistance. [5] Table 2 shows the benefits and costs of VAT zero rating compared to the current social assistance programme (specifically, old-age pensions and child support grants).[6] Using this information, a benefit-to-cost ratio can be determined, as shown in table 2. 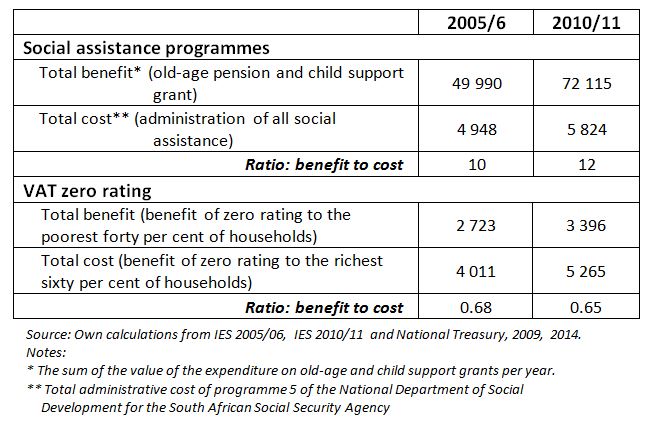 The results show a much higher benefit-to-cost ratio for social assistance than for VAT zero rating. Hence these programmes – which were underdeveloped at the time of the introduction of VAT (with zero rating) – have evolved to be much better targeted and arguably more effective, from a benefit-cost point of view, than zero rating.

Our preliminary conclusion is that VAT zero rating may not be the optimal way in which to relieve poverty. If zero rating is removed and replaced with a targeted social assistance programme that improves the welfare of the poor, a substantial net fiscal gain might be achieved (see Jansen & Calitz 2015 for estimates). Such a change would improve the after-tax-and-grants distribution of income without sacrificing poverty alleviation. The fiscal gain justifies a serious search for such an alternative social assistance programme or amendments to existing ones.

However difficult the political economy of altering the VAT might be, it seems justified from the point view of efficiency and equity. The removal of zero rating would reduce the distortions in the economy and could allow us to focus on those measures (such as targeted social transfers) where the equity gains are much higher.

[2] Formally: the tax rate must be inversely proportional to the price elasticity of the demand for a product or service. This is said to minimise welfare losses associated with the imposition of the tax (Rosen & Gayer 2014).

[3] Redistribution using differential rates is limited as there is an insufficient variation between the proportion of income spent on these goods by poor and rich households (Keen, 2012: 7).

[6] The total number of social assistance beneficiaries for these two transfers reached 14 million in 2012/13.