How flexible is the South African labour market in the short and long run?

Reads 26,854
Dieter von Fintel, 31 August 2015
The inflexibility of the labour market is commonly used as a scapegoat to explain high unemployment. Yet new evidence shows that only in specific contexts (unionized workers in the short run) does wage rigidity restrain the ability of the labour market to absorb workers. In the long run, wages are much more flexible and structural factors explain more of the unemployment puzzle. The policy debate on unemployment and wage flexibility needs to take these subtleties into account.

The inflexibility of the labour market has become a common scapegoat to explain the low rate of employment and the muted growth of (especially small) firms in South Africa. It is argued that employee-friendly labour laws put workers in a strong position vis-à-vis employers to bargain for high wages despite a crippling unemployment rate and a low growth of labour productivity (Fedderke 2012; Klein 2012). The World Competitiveness Report of the World Economic Forum (WEF) consistently rates the SA labour market among the least efficient in the world. Many argue that liberalizing the labour market to allow greater wage flexibility and to reduce the constraints on firing workers would go a long way towards solving the unemployment problem.

Yet the WEF rankings (which have been criticized in other contexts[1]) are based on the opinions of a small group of local business leaders – these ‘official’ statistics may poorly reflect the real importance of labour-market inflexibility. In addition, Magruder (2012) emphasizes that, whereas wage inflexibility may result in short-term job losses, it can hardly explain the long-run, structural inability of the labour market to absorb the jobless into the workplace.

Research evidence is mixed on whether wage inflexibility is the central constraint on the reduction of unemployment. For example, while bargaining councils appear to reduce employment creation (Magruder 2012), minimum wages do not necessarily destroy jobs in all industries (Bhorat et al. 2013). The Harvard group of economists[2] concludes that youths have been priced out of the labour market (Banerjee et al. 2008); nevertheless they show that there is substantial movement in and out of jobs over short time periods. And Kingdon & Knight (2006) show that wages moderate when regional unemployment is high; competition for existing jobs actually is pronounced, which weakens the wage-bargaining position of employees. These findings are not consistent with the view that wages are inflexible or that firms cannot readily adjust their workforces.

What should one then believe regarding the allegations of labour-market inflexibility and that excessive wage demands are a major cause of low employment growth? This article reports on striking new evidence.

A new look: the importance of space and time

A recent REDI research paper (Von Fintel 2015) explores the degree of wage flexibility in the labour market in a novel way, also updating previous estimates. In particular, it seeks to ascertain whether workers are willing to accept lower wages when the unemployment rate in the area where they live is high or whether workers are so protected by labour market legislation that they can demand high wages even if others are having difficulty finding jobs in their geographic vicinity (i.e. when there is a local surplus of workers).

The research has two important characteristics. First, its analysis of wage behaviour finds and recognizes that ‘the labour market’ tends to function as a multitude of smaller, local labour markets – not as a single, national labour market. The impact of a labour surplus (or shortage) on wages and employment tends to be localized in areas or regions. From the data it appears that these correspond roughly to district councils.[3] Figure 1 shows the 55 district councils in South Africa and the variation in their unemployment rates. 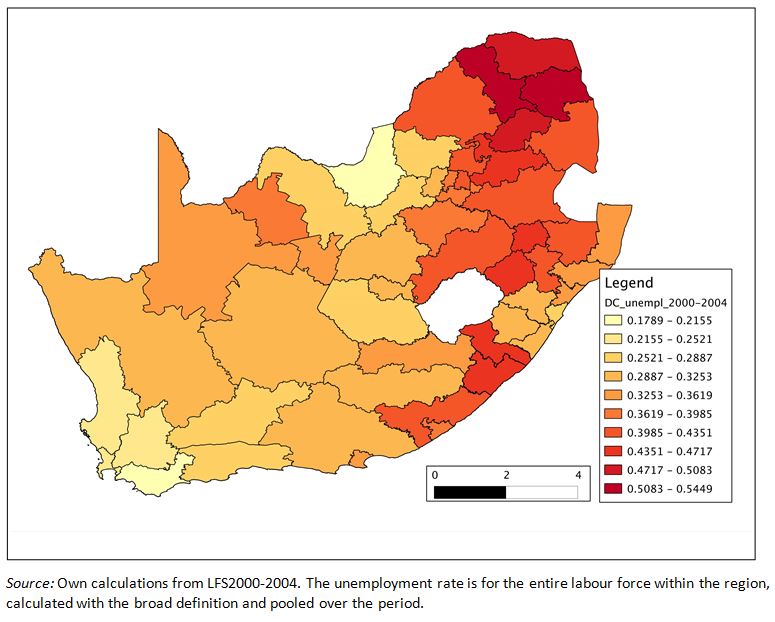 Secondly, and more pertinently, the analysis distinguishes between flexibility in the long run and in the short run. It appears that wage and employment behaviour may be very different over these time horizons.

The analysis uses data on wages and employment from Labour Force Surveys (LFS) from 2000 to 2004 (the period for which suitable LFS data was available). Statistical models of the behaviour of the South African labour market were developed to simulate (i.e. predict) the likely wage demands in various unemployment scenarios, i.e. under conditions of low to high local unemployment. These models were based on data for each of the 55 district council areas. The process generates a picture of typical wage behaviour in the South African context.

Figure 2. The empirical relationship between wages and unemployment
in SA in the short run and long run 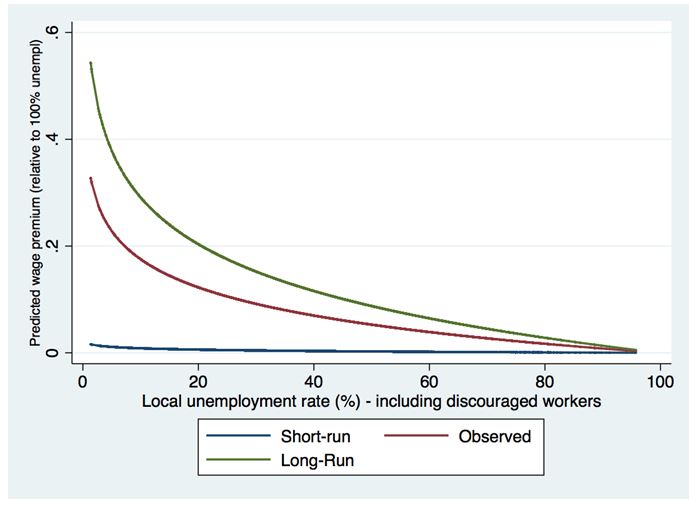 It suggests that wage demands (either from individual workers or via formal wage-setting institutions) are indeed sensitive to local labour market conditions. On average, wages are about 35% higher in regions with no unemployment than in regions where the whole labour force is without work. More specifically, within the areas where the workers live the statistical correlation between wages and unemployment rates is negative. It is remarkably similar to the pattern found in almost all countries in the world. Wages do appear to be flexible – they respond to local unemployment rates.

Wages are flexible in the long run, but not in the short run

This conclusion hides an important difference. Further analysis shows that this observed pattern is a combination of short-run and long-run processes that are very different in nature. They must be distinguished from each other. In figure 2 the blue and green curves show the relationship for the short run and long run respectively. The short-run curve is obtained by removing persistent time trends from the data within each locality, so that it represents wage adjustments over periods of six months (the interval between labour force surveys).

The more-or-less horizontal blue line thus reflects short-run wage responses to unemployment. It suggests that in the short-run there is no causal relationship between local labour market conditions and wages. This implies that wage demands largely are made without considering that jobs are scarce (and competition for jobs high) within a particular region. This evidence is consistent with a view of an inflexible labour market, perhaps reflecting that, in the short run, labour market institutions (such as collective bargaining councils) are more influential in determining wages than underlying labour market forces.

In the long run (e.g. any period of time beyond six months) the situation appears to be different. As the green curve in figure 2 shows, in the long run average wages tend to be significantly lower in areas where labour market conditions are persistently slack: long-run wages are more than 50% higher in areas of zero unemployment compared to what wages would be in regions where the entire labour force were jobless. This evidence clearly suggests that wage demands do take local labour market conditions appreciably into account in the long run, even if they do not in the short run.

Wages appear to be flexible in the long run. A likely reason is that wage agreements can enforce rigidity in the short term, but new agreements that are concluded at a later stage do take local conditions into account when these are unfavourable to high wage growth.

Are these effects the same for all workers? The evidence suggests not. While, on average, wages are rigid in the short run, certain workers nevertheless experience some form of flexibility even over this limited time horizon. Figure 3 shows similar short-run curves, as in figure 2, but separately for unionized and non-unionized workers.

A negative relationship between short-run wages and unemployment is present only if workers are non-unionized. For unionized workers, high wages apparently co-exist with unemployment in the short run (and likely contribute to such unemployment). Where non-unionized workers are concerned, there is wage flexibility in the short run, indicating that they adjust more speedily to poor labour market conditions compared to unionized workers; the latter only accept such changes in the long run (probably due to their desire to have binding wage agreements that extend over relatively long periods).

Figure 3. Short-run relationship between wages and unemployment
for various types of workers 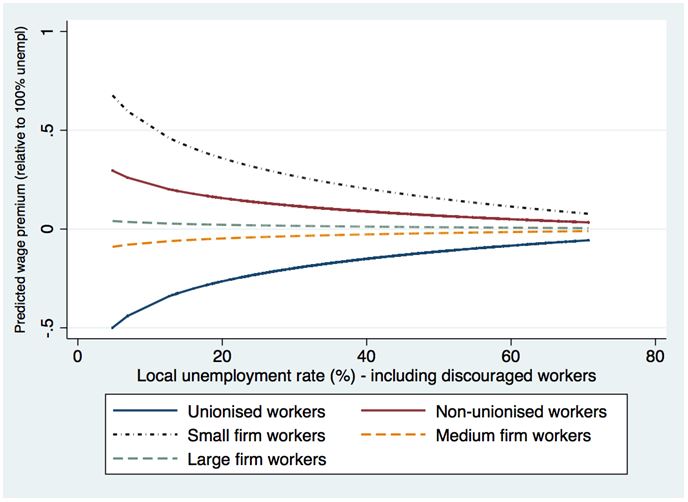 A similar story holds for firms of different sizes (regardless of whether they are unionized or not). The uppermost dashed line shows that the wages of workers who are employed by small firms (with fewer than five employees, in both formal and informal sectors) are highly responsive to poor labour market conditions. This probably reflects (a) that workers in small firms in the formal sector are typically not party to collective bargaining council agreements (except in the cases where the Minister of Labour has extended these agreements to entire sectors) and/or (b) how informal-sector firms function outside bargaining structures and pays market-driven wages. In contrast, wages of workers employed by larger firms show few signs of short-run wage flexibility, with the curves remaining flat for all unemployment rates. This can reflect collective bargaining and/or simply the greater rigidity and complexity associated with wage decision making in large corporates.

Talking about ‘labour market inflexibility’ as a single concept as if there is one homogenous, national labour market in South Africa is misguided. First, to a large extent the labour market functions as a multitude of smaller, area-based or local labour markets. In this smaller spatial context, wages are much more flexible and responsive to labour market conditions than they appear from national studies (such as Fedderke 2012; Klein 2012).

Secondly, and crucially, the distinction between the short run and the long run explains some of the conflicting findings from earlier empirical studies. While many South African workers are inflexible in their wage demands in the short run, in the long run they are flexible and they do factor local labour market conditions into wage negotiations. Even in the short run, workers in small firms and those who are non-unionized show significant signs of wage flexibility, indicating that their bargaining power is constrained.

Wage rigidity in specific contexts (short run and unionized) remains a concern regarding the ability of the labour market to absorb workers – union-bargained wages are likely to contribute to higher unemployment in the short run. However, in the longer run, wages appear to be flexible and one must look to structural factors to explain the unemployment puzzle. The debate on unemployment and wage flexibility needs to take these subtleties into account.

[2] They were commissioned by National Treasury from 2006 to 2008 to diagnose the binding constraints to growth in South Africa.

[3] District councils are administrative areas that were introduced after 1994 for the purposes of local government: they oversee smaller local municipalities. These 55 regions are larger than the magisterial districts and mostly comprise a number of former magisterial districts.