Reads 21,698
Frederick Fourie, 9 September 2014
While everybody seems to favour the pursuit of inclusive growth, this concept is rarely clearly defined in the policy debate. Inclusive growth is often confused or conflated with pro-poor growth or broad-based growth. A recent definition from researchers at the UNDP integrates the latter two concepts to include employment, poverty and inequality. A derivative Inclusiveness Index shows that South Africa has a very low degree of inclusiveness compared to other developing countries and that its growth since 1996 has not been inclusive.

Everybody seems to endorse inclusive growth as the way to address our most urgent economic problems. Indeed, because it appears to integrate concerns about unemployment, poverty and inequality with the promotion of economic growth, the concept may be able to defuse the age-old tension between growth and redistribution. The term is freely used, or claimed as a characteristic of projects and plans (like the National Development Plan), by commentators and spokespersons from government, business, labour unions, political parties and NGOs alike.

The question on hand is whether there is a common, or established, understanding of the concept that could guide policymaking. In addition, just how inclusive has economic growth been in South Africa? And, is it getting more inclusive or less inclusive? What kinds of policies would make it more inclusive?

This article reports on a recent proposal by researchers at the International Policy Centre for Inclusive Growth (IPCIC) of the United Nations Development Programme (UNDP). Their definition integrates the concerns found in the concepts of pro-poor growth and broad-based growth, and applies a resultant measure to South Africa and other developing countries.

What is inclusive growth?

The term ‘inclusive growth’ has not been definitively described in the South African debate. It appears to mean different things to different people, for instance: (a) increased employment and labour intensity, (b) increased public sector employment or employment schemes, (c) better social outcomes (health, education, etc.) due to improved public services to the poor, (d) increased social protection and social welfare, and (e) the increased integration of the second economy.[1]

Interestingly, the National Development Plan, which frequently mentions an inclusive economy and inclusive growth, does not define the terms explicitly. The concept of inclusive growth is used only intuitively and rather loosely (in justifying proposed policy steps, for example) and is not utilised as a more precise analytical tool to guide policy design.

Internationally, the development of this concept in the past decade sprang from attempts to define a broader concept of economic growth that incorporated equity and the well-being of all sections of the population – notably the poor, with poverty being considered either in absolute terms (poverty reduction) or relative terms (the reduction of inequality). Terms such as pro-poor growth, broad-based growth or shared growth signpost these attempts.

Whilst commentators often use these terms interchangeably, they are not necessary synonymous with inclusive growth. Clearing the semantic undergrowth can be useful (see Klasen 2010):

Inclusive growth, now the preferred concept internationally, is relatively new and the debate on the appropriate definition and measurement of inclusive growth is ongoing. Most proposals involve two or more components that are related to income, poverty, employment or distributiion (or equity) (see Klasen 2010; Anand et al. 2013; Ramos et al. 2013).

The proposal by Ramos et al. (2013) of the International Policy Centre for Inclusive Growth (IPCIC) of the United Nations Development Programme (UNDP) is a comprehensive response to the different concepts and considerations noted above (also see Ranieri & Ramos 2013). It tries to integrate the concerns found in the concepts of pro-poor growth and broad-based growth, also adding a few refinements.

'Inclusive growth is both an outcome and a process. On the one hand, it ensures that everyone can participate in the growth process, both in terms of decision-making for organising the growth progression as well as in participating in the growth itself (and earning income). On the other hand, it goes some way towards ensuring that everyone equitably shares the benefits of growth. Inclusive growth implies participation and benefit sharing. Participation without benefit sharing will make growth unjust and sharing benefits without participation will make it a welfare outcome.'

Thus defined, inclusive growth combines the increased participation of poor and marginalized people in growing economic processes (via employment) with increased sharing in the benefits of growth (via rising incomes as well as increased benefits from social expenditure, including human capacity building).[3] Both these elements need to be present for growth to be inclusive.

The benefit-sharing component of this definition is aligned with the concept of relative pro-poor growth, i.e. poor people’s income must grow faster than that of wealthier people, resulting in a decrease in inequality (Ramos et al. 2013:4). This amounts to a decline in poverty combined with declining inequality.

In a further refinement of this conceptualisation of inclusive growth, Klasen (2010) argues that the participation in the growth process needs to be expressly non-discriminatory, while the benefit-sharing outcome needs to be expressly disadvantage-reducing.[4] Thus, no one should be excluded (particularly the poor and the disadvantaged) and disadvantaged people should see a faster rise in their well-being than other groups.[5]

Measuring the inclusiveness of economic growth in South Africa

In implementing this definition of inclusive growth, an Inclusiveness Index has been developed at the International Policy Centre for Inclusive Growth. It contains three equally-weighted components: two outcomes-based, or benefit-sharing measures, i.e. a measure of poverty and a measure of income inequality; and one process-based measure, i.e. a measure of employment participation. The indicators are:

A country’s index is calculated relative to the data of the other developing countries that are analysed. Intuitively, it represents a country’s position regarding poverty, inequality and employment relative to the best situations within the group of countries.[6]

The Index is constructed on a scale ranging from 0 to 1. A higher index value implies a worse performance in terms of inclusiveness. Figure 1 shows the index values for a number of developing countries for 1996 and 2006. (Countries with a poverty rate of more than 65% are summarily classified as non-inclusive and given the highest index value possible, i.e. 1. These six countries, which include Kenya and India, can be seen in the upper-right side of the diagram. Their calculated index values are between 0.4 and 0.65 – below that of South Africa.) 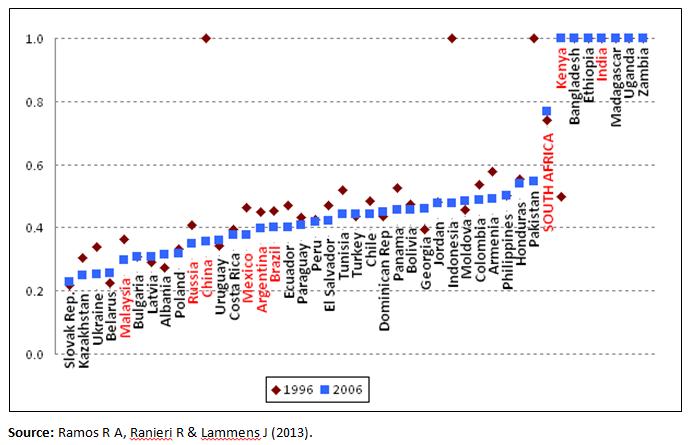 In terms of this measure, South Africa’s inclusivity has declined since 1996: amidst high GDP growth rates, the index has climbed from 0.74 in 1996 to 0.77 in 2006. In this period the only positive element in the SA index was the declining poverty ratio – but it was overshadowed by growing inequality and a declining employment-to-population ratio.

For economic growth as such to be considered inclusive, it must either lead to an improvement in all three indicators of inclusivity, or at least an improvement in one or two indicators but with the other indicator(s) stable/non-deteriorating (Ramos et al. 2013: 35).[7] Thus, South African growth has not been inclusive in this period. Looking beyond 2006, one may note that the increase in the Gini coefficient may have been halted (2011 StatsSA and other data) and that the poverty headcount ratio has continued to decline – but that the employment-to-population ratio has declined since 2006. Thus South African growth still has not become inclusive. (The SA index value might have stabilised, or even declined slightly, since 2006, but it probably is still at a very high level around 0.75).

South Africa’s low rank in terms of the Inclusiveness Index is in line with another assessment of inclusive growth from the early 1990s to approximately 2010 by Anand et al. (2013). This study places South Africa fifth from the bottom in a ranking of 27 selected emerging-market countries and 16th from the bottom among 100 emerging markets. (They use a definition that is based on changes in only two elements: per capita GDP and income inequality; see footnote 3.)

Growth will not be inclusive unless we make it inclusive

While there appears to be broad agreement on the policies that are important for growth and reducing poverty, less is known about what may foster inclusive growth (Anand et al. 2013:13). Ramos et al. (2013: 36-7) show that in most cases countries’ Inclusiveness Index performances cannot be explained by their GDP growth. The absence of a link between economic growth and inclusiveness is evidence that normal growth alone cannot reduce poverty and inequality and increase employment. In addition to the absence of trickle-down effects to reduce poverty, it probably means that current economic growth is not accompanied by the generation of adequate employment.

Here one encounters the problem that current growth patterns typically are not employment intensive. The employment coefficient in South Africa is approximately 0.5. This means that employment expands at only half the rate of GDP growth. As a consequence, the absorption of labour will continually decrease relative to output, implying that overall employment intensity keeps declining. This makes it very difficult to increase employment significantly on the basis of growth in the core, formal economy (see Fourie Econ3x3 article on growth, March 2013).

Part of the answer must lie in finding ways to enable those that are excluded from formal sector employment to find (or remain in) sustainable, paid employment or self-employment in the informal sector and grow their income from such work. If by definition inclusive growth means and requires, that poor and marginalised people participate in the growing economic activity and simultaneously benefit from it, inclusivity as a concept and as an economic policy strategy will have to include and integrate the informal and survivalist segments of the economy.

Pursuing and attaining such inclusive growth would clearly require much more than ‘priming the pump’ and/or increasing social spending. It would require an explicit inclusive policy strategy to increase productive activity, employment, self-employment and earnings in both informal and formal segments of the economy, to develop durable backward and forward linkages between these segments and facilitate sustainable transitions into employment. It requires a deep look, by private and public sectors alike, at the nature of production and employment processes – notably structural and policy-induced factors that marginalise and exclude disadvantaged people from participating in employment and work – as well as the earnings of workers, the inequality of income, the effectiveness of social benefits received and so forth. Appropriate legal and regulatory frameworks to support these changes, which could include elements of formalisation that are carefully selected to be enabling, would also be necessary – at all levels of government.

Lopez JH. 2004. Pro-poor growth: a review of what we know (and of what we don’t). World Bank PRMPR working paper.

[1] The concept of the second economy has all but disappeared from government policy documents; examples are the 2010 New Growth Path and the 2012 National Development Plan.

[3] Anand et al. (2013), in an IMF working paper, propose a measure that combines only outcome indicators, i.e. the growth in per capita GDP and the change in income inequality. It is narrower than the proposal by Ramos et al. Moreover, it is in line with the weaker, absolute definition of pro-poor growth rather than the relative definition.

[4] Klasen notes that these mean, respectively, that inclusive growth can be (partially) characterised as broad-based growth that has nondiscriminatory participation and that inclusive growth goes somewhat further than the relative definition of pro-poor growth – growth must mainly benefit disadvantaged groups (2010:2).

[7] These cases would respectively constitute the strong and weak definitions of inclusive growth.

Professor and Research Fellow, Department of Economics, University of the Free State