Reads 6,638
Neil Lloyd, 11 June 2018
Enterprises in the informal sector are known to have a precarious existence. The economic value and survival of an informal enterprise depend on the preparedness and motivation of the owner, inter alia. This article analyses the relevance of the work experience of a new, or entering, enterprise owner. It finds that prior work experience predicts informal enterprises that are larger, are more profitable, have more employees and are more likely to have their finances and premises separate from the household.

In furthering the conversation on the value and role of the informal sector, we should crucially understand the factors which determine both the survival and economic value of an informal enterprise. As the lifecycle of any business depends on the approach of and decisions made by the owner, its survival is partly determined by the owner’s alternative, or outside, earning options (i.e. the opportunity cost of being self-employed). This relationship is arguably stronger in the informal sector, where the majority of enterprises have no employees – the activities of the enterprise are directly tied to those of the owner-operator.

The economic value of the enterprise may also relate to the labour-market history of the owner, since these could determine both the motivation and preparedness of the owner. This article discusses research findings on the importance of the previous labour-market status of new owner-operators for the value and survival of an informal enterprise.

The decision to become self-employed as an owner-operator of an informal enterprise may be motivated by a number of factors, including a new business opportunity, a desire for self-determination and flexibility, or simply a lack of suitable wage-paying alternatives. Approximately 72.5% of respondents to StatsSA’s 2013 SESE (Survey of Employers and the Self-employed) say they entered informal self-employment due to unemployment, retrenchment or the lack of an alternative income source, while only 2.5% cited a new business idea or opportunity as the reason for starting their businesses.[1] While not conclusive evidence, it does suggest that, for many people participation in the informal sector as the owner-operator of an enterprise may not reflect their ‘first best’ source of work and earnings.

The decision to become an enterprise owner is also not a question of motivation only. The decision to do so and the characteristics of the subsequent enterprise both depend on the means of the individual or household to become an owner-operator. What are key, are having the necessary skills, access to credit (if the enterprise requires financial investment) and access to the market, which would include the absence of deterrents such as crime (Cichello et al. 2011). The previous labour-market experience (or status) of a new enterprise owner is likely to be a relevant factor in determining how prepared (and motivated) he or she is. Thus it could provide important insights into the potential duration of an informal enterprise as well as its economic value.

This article reflects some of the empirical findings of Lloyd & Leibbrandt (2016) as well as our chapter in a recently-published edited volume on the informal sector in South Africa (Fourie 2018). The research investigates entry and exit from owning an informal enterprise. It uses a panel dataset which follows a group of individuals who were interviewed in three successive quarters (Q2, Q3, and Q4) of StatsSA’s 2013 Quarterly Labour Force Survey (QLFS). The dataset is then augmented by matching more detailed information about the enterprises using data from the 2013 SESE.

We define someone who ‘enters into informal enterprise ownership’ as an individual who is observed to be self-employed in the informal sector (i.e. as the owner-operator of an enterprise not registered for income or value-added tax) in the third quarter (Q3) but not in the second quarter (Q2), for example.

Figure 1 shows the second-quarter (Q2) labour-market status of persons who were enterprise owner-operators in the third quarter (Q3) (for more detail, see Lloyd & Leibbrandt 2016 & 2018). Just under 30% of the sample of owner-operators in Q3 comprised new entrants (see the right-hand portion of the figure). Approximately two-thirds of these entrants were non-employed in the previous quarter: they were either unemployed (searching) or discouraged (non-searching unemployed), or not economically active. (These numbers are consistent with more anecdotal evidence that unemployment is the primary reason for entering self-employment in the informal sector.)

Figure 1: Origins of entry into informal enterprise ownership in Q3:2013 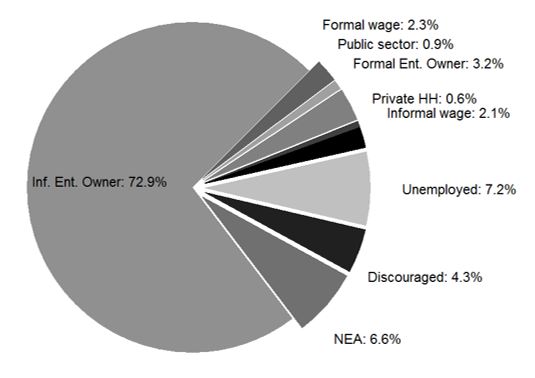 There are many reasons why the prior labour-market status of new enterprise owners might matter. For example, those who start a new business after having been employed may have savings to invest in the business, or may be motivated by a relatively better business opportunity (if they are giving up a stable source of wage income to do so). They may also have more human capital such as valuable skills, education and work experience, or more connections to prospective consumers and suppliers than those entering from non-employment.

Consistent with these expectations, we find that entrants who have been employed previously establish larger and more profitable informal enterprises. The following findings are significant:

All these characteristics suggest a significant difference in the scale and even intended duration of the enterprise if the entrant owner was in employment prior to entry. Certainly, these enterprises appear to have more growth potential.

. . . though they are equally likely to exit

It is somewhat surprising that the one area in which the two groups do not differ is in their short-term survival rate.

Around 45% of all the entrants into enterprise ownership between Q2 and Q3 of 2013 had left informal self-employment by Q4.[4] This number can be viewed in either a positive or a negative light. The high turnover may suggest that owners quickly evaluate a new enterprise’s prospects and exit if indicated – an efficiency gain. The 55% of informal enterprise owners who remain in operation for more than six months also represent a significant gain in welfare and employment when compared with the alternative of non-employment.

Remarkably, this six-month survival rate of 55% does not differ significantly according to whether entrants were previously employed or not. This is surprising, given the noted differences in the characteristics of these enterprises, especially with regard to their higher profitability.

A clue to understanding this is that, when previously employed entrants quit, the majority (81%) return to some type of employment, while most (89%) of the previously non-employed entrants who exit correspondingly go back to non-employment. The latter finding suggests that, with existing conditions and policies, for this group the income that they can earn from self-employment in the informal sector simply is too low to sustain long-term participation in ownership (compare Kingdon & Knight 2003; Bargain & Kwenda 2011).

However, for the previously employed group, the relatively high tendency to exit may simply reflect that they have relatively good outside employment options (implying that their opportunity cost to self-employment is relatively high). This is probably due, in part, to their education and work experience (and thus greater human capital). It may also reflect that they have a closer connection to the wage-paying labour market, having been more recently employed and being more likely to be informed of job opportunities.

For those who entered from being non-employed and then return to that state after six months, we may be seeing a demonstration of the scarring effects of unemployment (Mlatsheni & Leibbrandt 2011).

The finding on the relative importance of a new enterprise owner’s prior experience in the labour market provides a valuable perspective on the role of both motivation and preparedness in the decision to enter informal self-employment (enterprise ownership).

While most entrants may be taking up self-employment because they cannot find alternative employment and are thus largely ‘survival oriented’, people who take up self-employment in the informal sector after a period of having been employed establish larger and more profitable enterprises with employees – and are likely to be ‘growth oriented’ and entrepreneurial. This likely reflects that the individuals have higher human capital, possibly more savings to invest and greater market attachment.

Yet, since they can probably access acceptable alternative employment options, these owners are as likely to quit ownership in the short run as those not previously employed. This would represent a loss in terms of the economic value of the informal sector, since such individuals typically have larger and more profitable enterprises and more employees.

There are clear gains to be had in designing policies that increase the viability and duration of enterprises in the informal sector. Not only would it represent an employment gain in the short to medium term, but also a potential increase in revenue in the future for government if some of these firms develop to the point of formalisation. Given that growth-orientated owners may often be prepared to opt for outside employment options, to help sustain these owners the policies may need to include some form of financial assistance, for example through a self-employment subsidy or subsidised access to credit. Whatever the approach, our research suggests that the cost and risks associated with such policies could be reduced by screening candidates according to their past employment history. (Also see the policy discussion in Lloyd & Leibbrandt 2018 as well as the concluding policy chapters in Fourie 2018.)

Lloyd N & Leibbrandt M (2016) Entry into and exit from informal enterprise ownership in South Africa: An analysis of the 2013 Survey of Employers and Self Employed and 2013 Quarterly Labour Force Survey, REDI3x3 Working Paper 17

[1] Around 86% of entrants start out as own-account workers (i.e. without having any employees).

[2] Compared with the formal private sector (both wage- and self-employment), the public sector and the private household sector (i.e. domestic employees), the informal sector is generally characterised by a greater level of turnover (entry and exit between quarters).

[4] To put this in perspective: of all informal enterprise owners that were operating in both Q2 and Q3, only 13% had exited by Q4, implying  a much lower overall exit rate.