Meeting food security needs in very poor households in the Eastern Cape: the role of own agricultural production

Reads 7,741
Michael Rogan, John Reynolds, 6 February 2018
Small-scale agriculture evokes strong views in terms of both its current and potential roles in rural development. We examine how many (or few) Black households in rural areas that are identified as ‘food poor’ in terms of their income levels are able to meet their basic food needs – and the role of household agricultural production. We find that although rural households engaged in some form of farming are more likely to be very poor in terms of their incomes, they actually experience hunger less frequently than non-farming households.

Small-scale agriculture continues to evoke strong views in terms of both its current and potential roles in rural development. Proponents suggest that agricultural and land-based livelihoods are crucial but often unrecognised activities in the rural parts of the country, particularly given the high levels of deprivation and poverty (see Cousins 2013). Others focus on the small-scale farming’s potential to increase economic growth and employment in rural areas (see the 2017 Econ3x3 article by Steenkamp et al.).

In contrast, opponents have been very critical of the role of small-scale agriculture. They suggest that these small-scale activities are neither viable nor sustainable and that arguments about the relative efficiency of small-scale farming are generally misplaced (Sender & Johnston, 2004). Some support for this stance comes from the finding that households that farm are just as likely to depend on market-sourced foods as households that don’t grow crops at all (Palmer & Sender 2006). The fact that the familiar large supermarket chains now extend even into deep rural areas would seem to support this claim.

Putting aside these debates, we ask fairly simple questions. Rather than focus on the potential of small-scale agriculture, we ask: how many (or few) households in rural areas that are identified as ‘food poor’ in terms of income levels are able to meet their basic food needs? And, do households’ own agricultural production (i.e. farming mostly for subsistence or own consumption purposes) play a role in this? We focus on the Eastern Cape – a largely rural province with large sections which were part of the former homelands and with one of the highest incidences of household agricultural production (for more detail see Rogan & Reynolds 2017 and Rogan 2018).

There are several definitions of poverty in terms of income levels. Statistics South Africa defines a household as food poor if its total income is not able to cover the most basic calorific intake for each of its members. In money-metric terms the food poverty threshold has been set at a monthly income of R305 (in March 2009 prices) per household member. Using the General Household Surveys (GHSs), we are able to identify the households which do not report enough income to enable all members to consume a basic diet.

To measure hunger levels, the same survey (the 2012 GHS) includes two questions on how frequently either an adult or child in the household has been hungry in the past 12 months. The options of ‘hunger frequency’ include: never; seldom; sometimes; often; and always. We classify households in three ways using a narrow to a more expanded definition. First, we count households as suffering ‘acute’ hunger levels as those reporting that either an adult or child is often or always hungry. Secondly, also including households in which a household member is sometimes hungry identifies households with ‘medium’ hunger levels. Thirdly, ‘expanded’ hunger also includes those households in which a member was seldom hungry (i.e. this definition includes any household that doesn’t report ‘never’ experiencing hunger).

Which households experience hunger? The relevance of farming

The first enquiry concerns the households which are food poor (in terms of income) and which experience frequent periods of hunger. We focus on Black households and distinguish between households in the tribal authority areas (TAAs) – the areas formerly part of the ‘homelands’ – and the rest of the Eastern Cape province. Results for South Africa as a whole provide a comparative perspective.

Whether households are active in some type of agricultural production appears to be an important factor. Roughly 60% of Black households in the tribal authority areas (TAAs) farm is some way or another by raising crops or livestock (for subsistence and/or to sell). The first panel of Figure 1 below shows that these households are more likely to be below the food poverty line than households that do not engage in own agricultural production. In the tribal authority areas of the Eastern Cape, for example, 46% of Black farming households are food poor compared with only 40% of non-farming Black households.[1] It is important, however, to interpret this comparison carefully. Households could choose to farm because they are poor (i.e. they need the extra food) or they could be poor because they farm (i.e. because producing income from farming is difficult). 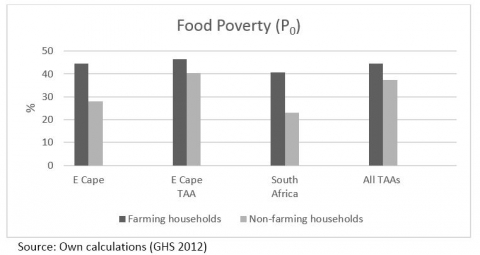 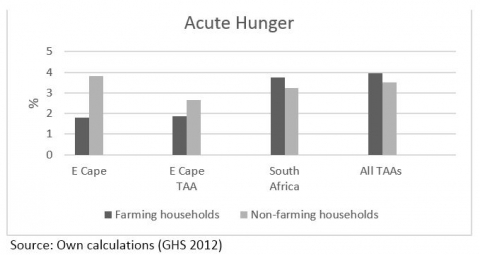 To explore this somewhat more deeply, we consider the second question of whether agricultural production continues to be associated with lower frequencies of hunger once we take into account household income – which varies greatly between households. Thus we look only at the Black households in the Eastern Cape that have incomes below the food poverty line – which surely must rank among the poorest in the country. Figure 3 shows that, among these households, those that farm seem to be better able to avoid hunger than those that do not. 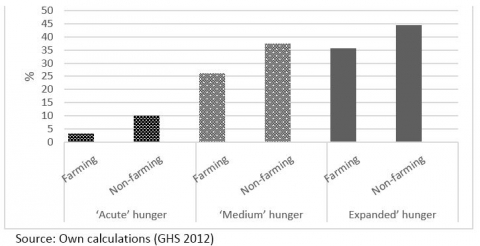 Analyses of these descriptive findings from Figure 3 using multivariate statistical analysis confirm the link between agricultural production and a lower frequency of hunger (see Rogan 2018, Rogan & Reynolds 2017). In other words, even after taking into account other factors such as the level and source of household income, we still find that poor Black households that farm are less likely to experience hunger.[2]

What we can claim from this analysis is that household agricultural production seems to be an important activity for a large number of poor households in the rural Eastern Cape and that, without access to regular labour market earnings, agricultural production plays at least some role in preventing frequent hunger. A conventional income poverty analysis (e.g. based on the food poverty line) would have missed this, which suggests that some of the detailed livelihood strategies of the poorest rural households may be missed by household surveys.

Debates about rural poverty and development often tend to focus on the proper or potential role of small-scale agriculture. Critics have gone as far as to suggest that provincial governments should remove support for agricultural interventions aimed at the small-scale sector (see Sender 2014). We would suggest that, while the questions of whether household agriculture promotes growth, provides jobs or perhaps even whether it reduces poverty remain open, there does seem to be a clear link between agricultural production and food security among the poorest households in the Eastern Cape province. We might also note that, while long-term development strategies are still required for the rural parts of South Africa, food security is an immediate concern and one that has long-term implications for those that suffer from frequent hunger and malnutrition.

Cousins B (2013) Smallholder irrigation schemes, agrarian reform and ‘accumulation from above and from below’ in South Africa. Journal of Agrarian Change 13(1): 116–139.

[2] Even though it might be tempting to suggest that farming reduces the risk of hunger directly, we can’t make this claim based on the analysis of a cross-sectional household survey (although others have come closer- see Pienaar & von Fintel (2014)).