Reads 34,294
Benjamin Stanwix, 22 January 2013
Average wages in agriculture have risen substantially in all provinces since the introduction of minimum wages in 2003 - the gap between the actual and the minimum wage has declined significantly. Compliance has been highest in the Western Cape and Gauteng, where average agricultural wages were close to or above the minimum wage even before it was introduced and wages have continued to rise thereafter. Although enforcement appears to have had a limited impact due in part to limited penalties, more effective inspection would be an important way to improve compliance.

Minimum wage policy in post-1994 South Africa has been pursued with the explicit aim of ensuring that workers in low-paid, vulnerable occupations are guaranteed a basic subsistence income. The added appeal of a wage ‘floor’ is that it helps to lift a portion of the working poor from extreme poverty and facilitates the redistribution of income in an extremely unequal society. South Africa’s history of legally-sanctioned economic exploitation, together with an influential trade union movement, add weight to arguments in support of minimum wage laws and make the introduction of such laws significant.

The recent protests over farm workers’ wages in the Western Cape highlight the urgency and complexity of generating sound minimum wage policy in a globalised sector that is struggling to square equity concerns with the demands of efficiency. A clear understanding of minimum wages and their impact is a crucial part of the debate going forward.

The minimum wage in agriculture

The introduction of nationally-binding minimum wages in South Africa was relatively recent, coming 105 years after the first minimum wage legislation in New Zealand. Historically, labour relations in South Africa were partly governed by the Master and Servants Act (1896) and the Industrial Conciliation Act (1924) - later to become the Labour Relations Act (1956) – or, in specific cases, by Bargaining Councils. Yet it was not until 1999 that the first minimum wage legislation was introduced, for workers in the contract cleaning sector. Since 1999 a detailed minimum wage schedule has been developed – now covering eleven sectors of the economy – and labour market institutions have been created to enforce the new laws.

Unlike many other countries, in South Africa the minimum wage is different for each sector. There is thus no single minimum wage.  Even within a particular sector the mandated wage can vary by occupation type, number of hours worked, or geographic location, and this is specified in a ‘Sectoral Determination’, which includes regulations on working hours, overtime pay, and written contracts.

The Sectoral Determination for farm workers became effective in March 2003. Minimum wages were set at R650pm for workers in areas loosely classified as ‘rural’ and at R800pm in areas classified as ‘urban’. The minimum wage has been gradually increased since its introduction, and in 2007, the rural minimum was R949, while the urban minimum was R1 041. When the minimum wage was introduced in 2003, approximately 70% of farm workers were earning less than the urban minimum, and 50% were earning less than the rural minimum.

The impact of the minimum wage on wages

The introduction of the Sectoral Determination for farm workers appears to have had three main, quantifiable effects.[1] Firstly, aggregate employment on farms appears to have fallen by around 13% in the four years after 2003. Output on farms would have been maintained through higher labour productivity, increased mechanization or a combination of these two forces, as the long-term trend in South African agriculture suggests. Secondly, the Sectoral Determination requires that all farm employees have a written contract, and in the years after 2003 there is evidence of a significant increase in the number of workers with such a contract. This suggests that workers who retained their jobs had some measure of improved job security and were more likely to understand their terms of employment.

Thirdly, average wages have risen substantially since 2003. Figure 1 plots median[2] wages for full-time farm workers, by province, before and after the introduction of the minimum wage. The overall upward trend in median wages is clear. However, it must be noted that there is a considerable spread of wages above and below the median wage in each province.[3]

The figure also shows that, on average, farm workers in the Western Cape and Gauteng received the highest wages – compliance was highest in these provinces. Average wages were close to or above the rural minimum wage even before the law was introduced and continued to rise thereafter. Farm workers in the North West, Limpopo, Mpumalanga and the Free State appear to have been among the most poorly paid in the country.

On the whole, relative levels of minimum wage violation (measured as the gap between the actual and the minimum wage) have declined significantly since 2003. The upward trend has been strongest in the provinces that initially paid the lowest wages, leading to a much smaller variation in wages across provinces by 2007. 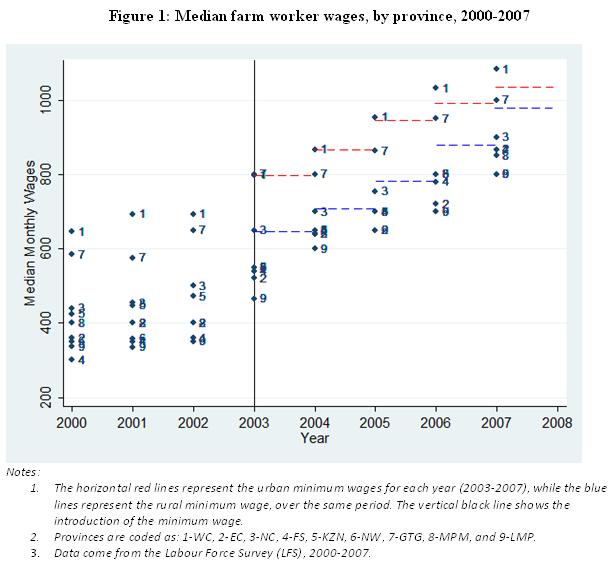 With reference to the recent farm worker strikes, this raises two questions. Firstly, if farm workers in the Western Cape are the highest earners, why have the strikes occurred there and not elsewhere? Secondly, is it true to say (as reported in the media) that much of the unrest was among seasonal workers? (They generally receive lower wages and face more fragile employment conditions than the full-time workers represented here). These issues are important when considering how to structure effective wage bargaining and reassess the minimum wage policy – which treats full-time and part-time work differently.

Enforcement and compliance – or other factors?

One of the most under-researched questions relating to minimum wage policy is how effective it is in practice. How comprehensively is the law enforced and how widespread is non-compliance? The academic literature on the topic often implicitly assumes that all employers comply with the law, but in most developing countries this is not the case. In South Africa the data show that while wages have increased substantially as a result of the law, in many cases a significant proportion of farm workers received higher but still sub-minimum wages.

One possible reason for the low levels of minimum wage compliance in several areas of South Africa is the weak incentives to comply with the law. The choice of how to respond depends partly on the risks of being caught and the severity of the penalty. In the case of agriculture, the risks have been low and the penalties light. For example, in the Western Cape the simple probability of a farmer being visited by a labour inspector in 2007 was 11%.[4]

The maximum penalties for non-compliance are shown in Table 1 and reveal that, while repeat offences and greater levels of underpayment attract larger penalties, overall the fines are small.

Taking into account other factors such as the average level of underpayment and the number of workers per farm, a basic cost-benefit model reveals that there is no financial incentive for the typical employer to comply with the law. For the average Western Cape farmer it is financially beneficial to risk paying sub-minimum wages, given the low probability of being caught and the fines that would result. It is likely that this holds for most of the other provinces.

Although there seem to be no financial benefits to compliance, the data show that there have been substantial increases in wages as a result of the law. Many farmers in the Western Cape paid the minimum wage and above, while those who continued to pay sub-minimum wages were unlikely to incur serious costs through the official channels of enforcement.

This probably means that the direct impact of enforcement on wages has been limited. Various other factors may determine employers’ decisions about what to pay their workers. These factors are difficult to measure and could include a personal sense of fairness, farm profitability and the ability to pay higher wages, the possibility that higher wages may increase worker productivity (efficiency wages), the evolving wage expectations of workers, considerations of worker discontent, and wage levels on nearby farms. Farmers who responded to the law by increasing wages to the minimum (and above) may have been doing so for some of these reasons. On the other hand, perhaps they also were responding to the risk of being inspected and penalised, but overestimated that likelihood.

The need for effective enforcement

Nevertheless, the low probability of being inspected along with a weak penalty structure may partially explain why many farm workers in South Africa still receive sub-minimum wages. Factors which contribute to this low probability of inspection include the shortage of labour inspectors and a lack of the basic tools required to do a difficult job.[5] This includes not only poor inspector training, but also a shortage of vehicles and limited access to equipment such as computers and telephones.

Increasing the number of inspections (through more inspectors and resources) as well as raising the financial penalties for non-compliance may improve levels of compliance. Compliance is also likely to receive more public attention after the strikes, which should further narrow the gap between actual wages and the minimum wage.

Those trying to decide on a suitable minimum wage policy must make an effort to ensure that the intended anti-poverty effects are maximised and the negative employment effects are minimised. These outcomes are closely linked to levels of compliance in the agricultural sector and the ability of the inspectorate to work with employers to establish sustainable compliance.

The evidence on minimum wages presented here leaves unanswered many questions over what caused the recent strikes. Clearly one cannot view the situation purely in terms of the lack of enforcement of, or compliance with, minimum wage laws, especially since the wage being demanded was far above the legislated minimum. Factors such as a post-Marikana effect, the share of foreign and seasonal workers in the strike, the role played by non-wage issues, COSATU’s own involvement, and objectives regarding the desired level of minimum wages in the region are perhaps more important than the issue of enforcement and compliance.

Bhorat, H, Kanbur, R & Stanwix, B (2012a): Estimating the Impact of Minimum Wages on Employment, Wages and Non-wage Benefits: The Case of Agriculture in South Africa, DPRU Working Paper, WP 12/149.

[2] The median is the value in the middle of the distribution of wage data; this is used as the ‘average’ wage.

[3] Interested readers can consult Bhorat, Kanbur & Stanwix (2012a) for kernel density plots of farmworker wages, which show how the whole wage distribution shifted over time.

[5] This is based on information from interviews, focus groups and a survey of labour inspectors conducted by the Development Policy Research Unit (DPRU).