Should agriculture receive greater support as part of an inclusive growth strategy?

Reads 11,085
Anthony Black, Beatrice Conradie, Hein Gerwel, 26 November 2014
In developing countries, agricultural growth is generally employment intensive and pro-poor but this sector in South Africa has been subject to a drastic decline in tariffs, pricing, infrastructure and other forms of support. This has not been compensated for by alternative measures such as expenditure aimed at facilitating small-scale agriculture and effective land reform. The result has been poor economic performance and rapidly declining employment in commercial agriculture with little sign of revival in the small-scale sector.

There is substantial international evidence that the contribution of agriculture to raising the incomes of the poorest groups in low- and middle-income countries is substantially greater than the contribution of other sectors.[1] The multipliers in agriculture are also extremely high because of the association with labour-intensive, non-farm employment. The sector accounts for a small and declining share of South Africa’s GDP but, because it is so labour intensive, both commercial agriculture and the small-scale sector remain important sources of employment. Regarding the latter, Hall & Aliber (2010) estimate that in South Africa there are 200 000 commercially-oriented small-holder farmers and 2.5 million households that are involved in agriculture primarily for subsistence purposes. The National Development Programme (NDP) sets ambitious targets for employment creation within agriculture and estimates  potential employment to be as large as 643 000 primary jobs, as well as 325 500 secondary jobs, by 2030 (NPC 2012:220).[2]

However, a key feature of agricultural policy over the last three decades has been a decline in price, tariffs and infrastructure support to commercial agriculture. New programmes to support land reform and small-scale agriculture have met with very limited success. The result has been that market pressures on commercial farmers are driving the consolidation of land holdings and also the shedding of employment in (formerly white) commercial farming areas. At the same time, rural development – especially in the former Bantustans – has been stymied by limited capacity and resources.

This article outlines the dimensions of this decline in support and its effect on agricultural production and employment. This in turn raises the question of how the NDP’s ambitious targets will be attained within such a challenging environment.

The evolution of agricultural support policy: liberalisation and decline

Fundamental to understanding South Africa’s agricultural dilemma is the set of land and agricultural policies that historically led to the emergence of large-scale, white-owned commercial agriculture alongside a dislocated, black, small-scale farming sector that earns extremely low incomes. The white-owned farming areas were organised on a large scale, capital-intensive basis and the commercial sector received generous support over several decades up to the early 1990s. This support included measures to stabilise prices and restrict imports, concessionary interest rates, subsidies for fuel, rail transport and fertiliser as well as support for extensive irrigation and soil conservation. In the Bantustans there was a very different picture. Subsistence farmers lacked land, resources and infrastructure – and output declined. Resettlement policies and forced removals increased overcrowding in these areas.

Starting in the 1980s (the Thatcher-Reagan era of free-market liberalism) and gathering pace during the 1990s, commercial agriculture went through a major process of liberalisation. This included the deregulation of marketing and the liberalisation of pervasive price controls, as well as the partial removal of favourable tax treatment. In the 1990s, there were further reforms to marketing policy that exposed the sector much more to the influence of international prices. Protective quotas, specific duties and price controls were phased out and, for the most part, had been abolished by 1995.

The net effect is that South African agriculture went from being highly protected prior to 1994 to having levels of support that currently are amongst the lowest in the world. According to the OECD (2011), producer support in South Africa as a share of gross farm receipts has declined from approximately 15% in 1995 to 2% in 2010. Moreover, this decline has been much steeper than the average decline in OECD support levels, which in any event remained very high at about 17% in 2010. Table 1 shows Total Support Estimates (TSEs)[3] as a percentage of GDP for OECD countries and some developing countries that are major agricultural producers. 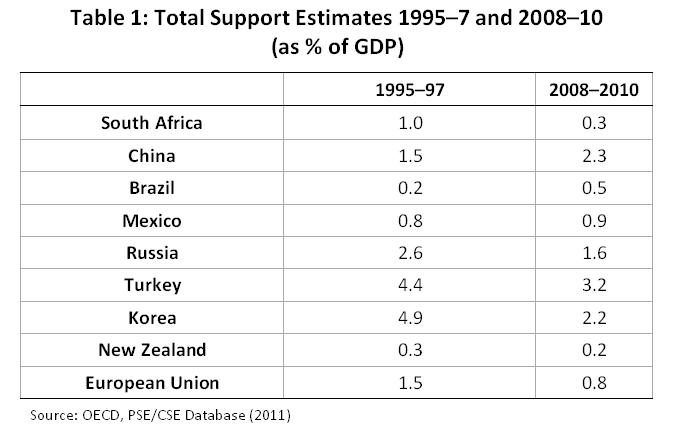 With the exception of Australia and New Zealand, for the period 2008–2010 South Africa had the least support, with South African levels’ being far lower than those of major middle-income agricultural producers such as Turkey, China, Mexico and Russia. (Note that South African government expenditure on land reform, the aim of which is primarily redistributive, is included in the estimates of support above. This implies that, effectively, government support to agriculture is even lower than shown above.)

Agriculture depends heavily on the availability of public goods such as infrastructure in particular (Chang 2009). Government provision of infrastructure in the formerly white commercial areas has declined sharply over the past three decades. One indication is the decline in subsidies for conservation works from an average of R6.4 billion per annum in the 1980s to just R176 million in the 2000s (Liebenberg 2012:140). In the former reserves severe backlogs remain;  in some cases, these have got worse. Programmes such as the Community Based Public Works Programme (CWP), the Consolidated Municipal Infrastructure Programme and the Poverty Relief and Infrastructure Investment Fund have had limited positive effects (Machethe 2004). In addition, irrigation schemes have been poorly maintained.

Since 1994, agricultural extension has changed to a single amalgamated service which now focuses mainly on previously disadvantaged small-scale farmers (Düvel 2004). However, the capacity to provide agricultural extension services is weak and the effectiveness of this spending has been questioned by a number of analysts.[4]

The state of agricultural finance

Compared to the latter sector, the credit position of smallholders, mainly in the former Bantustans, has been much more problematic. After the closure or collapse of parastatals that had been established in the former Bantustans, the Land Bank was tasked with supplying services to farmers in these areas. By 2003, it reported a rapid increase in advances, with R2 billion being advanced to 15 000 black farmers (Machethe 2004). Finance for small-scale farmers is also supplied by the Micro-agricultural Finance Initiative of South Africa (MAFISA). In spite of these positive developments, access to credit for small farmers remains far from adequate (De Klerk et al. 2013).

The impact of land reform has been limited and the amount of land that has actually been transferred does not come close to the stated targets. New landowners have received little support and, as a result, in many cases farm output has fallen dramatically. For instance, the NDP reports that 70% of the citrus orchards that have been redistributed are in distress (NPC 2012:222). Direct government investment in land reform also seems to be waning and funding has declined in real terms from 2007/08 to 2010/11 (Hall 2011) and was cut in the 2013/14 budget.

South African agriculture is increasingly becoming integrated into world markets and the sector exports over a third of its production. This is a significant increase compared to the just over 20% exported during the sanctions years (1980–94) – but not much more than the share of production exported during 1970–9. The share of South African agricultural exports as a share of world exports has been stagnant or has declined, in sharp contrast to that of many middle-income developing countries such as Brazil, Argentina, Mexico, China and Thailand (Sender 2012:105). Imports, on the other hand, have increased sharply. Agricultural imports, as a share of agricultural output, increased from 7% in 1975–9 to 14 % in 1990–4 and 26% in 2006–8 (Sandrey et al. 2011:15). Imports in this latter period almost reached parity with exports – while in 1975–9 they were only a fifth of exports. The growing cost of imports has been a contributory factor to the stagnation of farm income from the late 1980s until the early 2000s, after which farmers were assisted by a depreciating currency.

There has also been a decline in investment in terms of fixed improvements as well as of machinery and equipment. The real value of capital assets on commercial farms has declined nearly every year from 1980 until the early 2000s (Sandrey et al. 2011:12). Further evidence of the pressure on commercial agriculture is evident in the rapid rate of farm consolidation that has been taking place, with the number of farms declining from 58 000 in 1993 to 40 000 in 2007 (Liebenberg 2012).

Despite some improvement in the infrastructure of the former Bantustans, agricultural output in these areas is very limited and has declined, with only 2% of households deriving their principal form of income from agriculture (Wilson 2009:20). There is also evidence, particularly in the Eastern Cape, that, in spite of overcrowding, increasing amounts of land are underutilised. Wilson (2009) cites a number of explanations that have been put forward, including outmigration by able-bodied younger people (even, and especially, those with better access to land in the rural areas), the rising cost of farm inputs, an increase in rural crime and lawlessness, and changing social attitudes.

Estimates of aggregate employment in agriculture vary, depending on the sources and definitions, especially with regard to small-scale agriculture. According to the Labour Force Survey, total employment in agriculture in 2010 was 651 000, while Liebenberg (2012) provides a total of 832 348 people who were employed on farms in 2010 (he has much higher numbers due to the inclusion of family labour and owners and adjustments regarding seasonal workers, excluding domestic workers). However, all available data for commercial and small-scale agriculture (such as the Farm Survey, Census data, the Labour Force Survey and World Bank estimates) show sharply declining trends. Even Liebenberg’s higher numbers shows that employment has declined – from 1 241 000 in the 1980s and 1 014 000 in the 1990s.

Conclusion: an important sector in trouble

In spite of its relatively small contribution to the South African economy, agriculture has an important role to play in any employment-intensive growth strategy in terms of generating unskilled and semi-skilled jobs and providing self-employment for small-scale farmers – in addition to supporting rural livelihoods.

However, agriculture is South Africa’s Cinderella sector. It receives limited attention and a limited budget. While there has been a noticeable real increase in direct state expenditure on agriculture since 1996, this still is insignificant against the backdrop of the prior steep decline in other (previously substantial) forms of support, especially producer support. Also, much of the expenditure has gone into land reform rather than into agricultural support.

It can therefore be concluded that, since 1990, developments in agriculture and rural development generally have exacerbated rather than ameliorated South Africa’s chronic unemployment problem. There have been significant employment losses in formal agriculture; the potential positive impact of land reform on income generation, employment and livelihood support has not been realised; and the economic reconstruction of former Bantustan areas is far from being achieved.

If these negative trends are not reversed through well-designed and well-targeted policies, there is little hope of achieving pro-poor employment growth.

Ligon E & Sadoulet E. (2007) Estimating the effects of aggregate agricultural growth on the distribution of expenditures. Background paper for the WDR 2008. http://sitesources.worldbank.org/INTWDR2008/Resources/

Phulisani Consultancy. (2008) Extension and small holder agriculture: Key issues from a review of the literature. Review for the Second Economy Strategy. http://www.phuhlisani.com/view.asp?pg=downloads

Sender J. (2012) Fictions and elephants in the rondawel: A response to a brief chapter in South Africa’s National Development Plan. Transformation 78: 98-114.

Valdes A & Foster W. (2010) Reflections on the role of agriculture in pro-poor growth. World Development 38:10.

[2] Based on a (conservative) employment multiplier of 0.5 between small-scale agriculture and its upstream and downstream industries.

[3] The TSE is a measure of the total value of all transfers from consumers to producers that result from agricultural policies, net of linked budgetary receipts. It includes price support, subsidies and budgetary transfers, for instance via support for R&D, extension services and infrastructure.