Reads 9,221
Friedrich Kreuser, Neil Rankin, 20 June 2017
While technology is making capital cheaper, policies like the national minimum wage will make labour more expensive. What does this mean for the choices firms make in terms of labour and capital inputs? This research shows that higher prices for labour will result in lower demand for labour, making job creation more difficult. Low-skilled and high-skilled labour are substitutes – higher wages for low-skilled workers will encourage firms to employ more high-skilled workers and become more skill intensive.

In South Africa, and globally, a number of trends are changing the relative price of labour. The coming implementation of a national minimum wage will substantially increase the cost of employment, particularly of lower-skilled workers. In parallel to this, the ongoing ‘Fourth Industrial Revolution’ is making technology cheaper and more widespread. The impact of both of these on employment depends crucially on whether firms can move away from using people and towards using machines (capital), or whether these two inputs must be used together.

The issue of capital and labour substitutability should be central to the South African employment debate. However, this matter is often neglected. It relates to the following:

Likewise, the substitutability between different types of labour – whether one can replace one type of labour with another – is a critical issue (i.e. complementarity within employment matters too). Can low-skilled workers be hired instead of high-skilled workers, or does one group need the other? And what about semi-skilled workers?

Understanding these relationships is important when crafting sensible polices for South Africa, which has had persistently high rates of unemployment, particularly amongst those with lower skills.

A gap in the unemployment debate

The ‘standard’ narrative used to explain South Africa’s high levels of unemployment is that those who are unemployed lack the skills which firms require. In this narrative, the policy solution is simple (although the implementation may be difficult): provide the requisite skills to those who are unemployed. Various government initiatives attempt this solution. For example, Skills Education and Training Authorities (SETAs) train workers based on firms’ needs, while learnerships provide subsidised employment and training for new entrants into jobs. A further constraint is the state of the education system. Work by Stellenbosch University’s Research on Socio-Economic Policy (RESEP) group shows how the school system underperforms and perpetuates inequality in the labour market. However, educational reform will require political will and capital and, even if it were implemented today, it would be likely to take a generation to have a real impact.

Consistently missing from the ‘skills narrative’ is any discussion of the substitutability between factors of production (e.g. labour and capital/machines), including substitutability between different types of labour – and the central role that prices and wages play in encouraging firms to choose capital over labour, or one type of worker over another.

Discussing the effect that the relative price of labour has on demand is politically charged, as debates around the national minimum wage have shown. However, avoiding this issue neglects a potentially important factor which may be constraining job creation. Furthermore, identifying the substitutability or complementarity between factors of production can also identify other bottlenecks. For example, creating employment for unskilled workers may be constrained because complementary inputs (e.g. necessary machines or equipment which workers need) may be lacking.

Estimating the substitutability of capital and labour using new data

Most earlier work on how the demand for labour is related to its own price (wages) and the price of other inputs in the production process has analysed the relationship at the aggregate level (either for a sector or for the economy as a whole).[2] An alternative approach is to look at the relationship at the level of the firm. A study by Behar (2010) did precisely this: using data for the late 1990s, it finds that capital is a substitute for all occupations but it also reveals that, within labour, unskilled and semi-skilled labour are complements, while unskilled and skilled labour are substitutes.

This article reports on a recent study (Kreuser & Rankin 2017) which updates this work with a different and more recent dataset. The data comes from the World Bank’s Investment Climate Assessment (ICA) of 2004, a firm-level survey of predominantly manufacturing firms across the major metropolitan areas of South Africa. The research estimates a ‘cost function’ – a representation of how the cost share of a specific input is related to the cost of other inputs and output across firms.

This approach estimates how the demand for a specific input (for example labour) changes with its own price as well as with the prices of other inputs (for example capital). This is called the elasticity of substitution and can be used to determine whether inputs are substitutes or complements: (a) for inputs which are substitutes, an increase in the price of one input leads to an increase in the demand for the other, as firms substitute between inputs; (b) if they are complements, a higher price for one leads to a reduction in demand for the other. This also indicates the degree of substitutability between inputs.

Relevant empirical results are shown in this table:

Table 1. Own and cross-elasticities of demand

We find that capital and labour are imperfect substitutes: an increase in the price of labour (relative to capital) is likely to lead to relatively fewer jobs being created. The essential numbers with regard to this conclusion are the following:

What does this mean for the demand for labour and capital?

What these results mean in a broad sense is that increases in the relative cost of labour (like what is likely to happen with the national minimum wage) will result in firms’ employing relatively fewer people and replacing them with machines or technology. The continuing development of technology, computers and algorithms is likely to make labour-saving technology cheaper. This will make capital cheaper and more productive – and further encourage firms to substitute away from labour. In this environment, job creation, which South Africa requires on a massive scale to reduce its high unemployment rate, will become more difficult.

These results also suggest another explanation for why job creation in South Africa over the last twenty years has been difficult. Improvements in macroeconomic policy, and especially in monetary policy, have meant that real interest rates – and the price of capital – have fallen since 1994 (see Aron & Muellbauer 2007), as shown in figure 1.

Figure 1. South African real interest rates (%), a proxy for the cost of capital 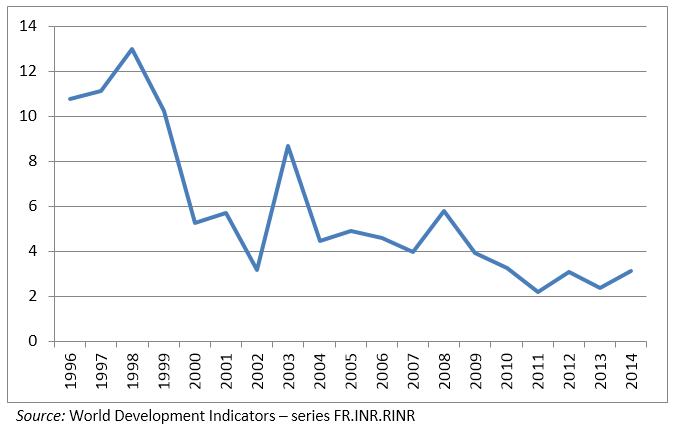 Job creation and the policy to facilitate it thus face at least two persistent challenges:

Both of these are likely to encourage firms to choose machines over workers. Policies for employment creation will need to work doubly hard to compensate for these changing relative prices.

What does this mean for different types of workers?

Not all workers are the same and the research suggests that there are different levels of substitutability between different types. These relationships can be summarised as follows:

These results may help explain why some parts of organised labour have strong stances on two policies which change the price of lower-skilled workers. Some parts of organised labour have vociferously opposed the idea of a youth wage subsidy, and the implementation of the Youth Employment Tax Incentive. This tax incentive reduces the cost of hiring new, young, low-paid workers (most of whom would be classified as unskilled), encouraging firms to employ more of them. Consequently there would be a reduced demand for skilled production workers, the constituents of organised labour. A national minimum wage, which will increase the price of unskilled labour, is likely to have the opposite effect, and encourage substitution towards more skilled workers.

Job creation in the future

As technology evolves, job creation is likely to become more difficult, particularly for unskilled workers (who form the bulk of South Africa’s unemployed). Based on the results in the research, there are at least two areas where South African policy can focus.

1) Change the relative price of labour. These results indicate that cheaper labour will result in more employment; however, reducing wages is difficult practically, politically and ethically. There are a number of ways to reduce the costs of employment to firms without significantly reducing the wages that workers earn. One way is through an incentive like the existing Employment Tax Incentive, where firms can pay lower taxes if they employ young workers at the low-wage end of the wage distribution. The limitation of the scheme is that it targets only young workers and new jobs, which may discourage firms to preserve existing jobs. An alternative approach would be for government to ‘top-up’ the wages of low earners, like the US’s Earned Income Tax Credit does. Such top-up amounts can encourage people to accept work at a lower employer-paid wage, since their combined earnings (wage plus top-up) will be higher. These costs accrue to the fiscus (i.e. taxpayers). In South Africa, where the bulk of tax is paid by higher-income earners and large companies, such a scheme is likely to be highly redistributive.

2) Change the skills composition of the workforce. The results of the research suggest that higher wages for the low-skilled encourage substitution towards higher-skilled workers. A limited pool of these types of workers may limit this substitution. Growing the pool of skilled workers has the double benefit of reducing this constraint for firms but also of potentially improving the skills, and likely incomes, of some of the unskilled.

Furthermore, these results suggest that policies to create jobs need to respond to the broader trends of the changing nature of work and technology and the changes in relative prices which result.

[1] There is also a third way in which technology and labour may interact. If technology is ‘labour augmenting’, i.e. making each worker more productive, it can have two (divergent) effects: it may spur firms to add employees as they expand or firms may strive to produce the same output with fewer workers, which constrains employment growth.