Reads 10,120
Mike Coleman, Mike Kenyon, 11 July 2017
The Wild Coast, in the former Transkei Bantustan, is characterised by natural beauty and great poverty. Since 1994 rural land administration has collapsed, land tenure has not been reformed, a succession of coastal development plans have been proposed but not implemented – and communities have become disillusioned. The few tourist-related developments that have taken root have done so despite the general collapse of rural governance and are due largely to the determination of local developers and their community partners

Introduction: a place of beauty and poverty

The coastal belt of the former Transkei Bantustan has long been known as the Wild Coast because of its natural beauty (as in the collage below) and the lack of high-impact development. It extends along the entire length of the Transkei coast, from the Mtamvuna River and the border with KZN province in the north, to the Kei River in the south (north of East London; see map further down). Yet it is also an area of great poverty – as is the situation in most of the rural former reserves or Bantustans across South Africa. The Transkei and the Mpondoland area, which make up the northern half of the Wild Coast, continue to be a major labour-exporting area and the Mpondo rock-drillers have become well-known through the tragedy of Marikana. The decline in employment in the mines since the 1980s has had a serious impact on the Transkei in particular, given the long history of its dependency on migrant labour to the mines.

This article reports the findings of a recent research report (Coleman & Kenyon, forthcoming) on research undertaken for the Research Project on Employment, Income Distribution and Inclusive Growth (REDI3x3) on the dilemmas facing this area.[1] 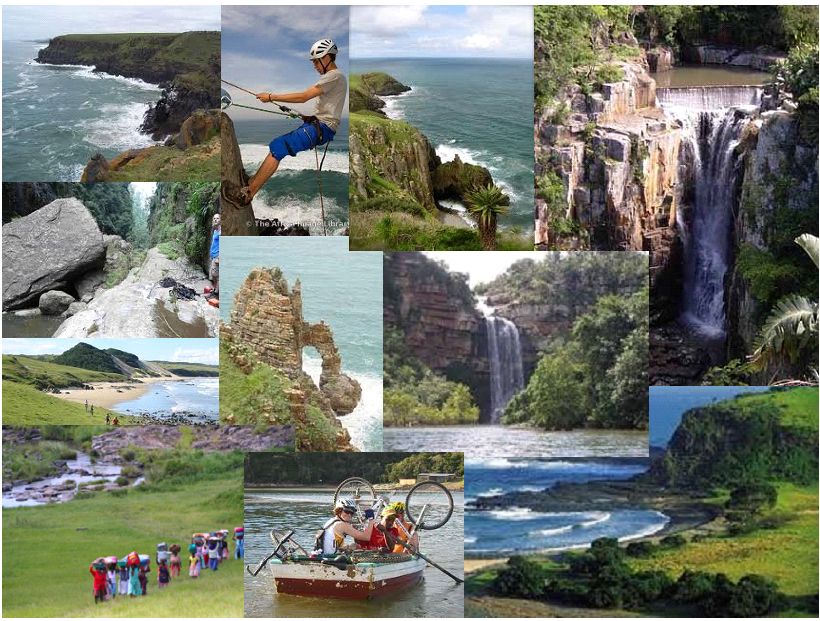 Poverty alleviation and active and sustained economic development have been the natural and obvious twin goals in the area since 1994. However, despite high-profile national and provincial programmes such as the Wild Coast Spatial Development Initiative of the DTI in the late 1990s, as well as the more recent Integrated Wild Coast Development Programme (championed by former MEC Mncebisi Jonas), there has been little if any local economic improvement.

Since 1994 there has been no proper land administration, no land-tenure reform, no transfer of restitution land, belated and partial control of proliferating illegal coastal cottages, questionable tenure of coastal hotels, a succession of coastal development plans without implementation – and disillusioned local communities. Even where public administration systems are in place (dominated by environmental processes), decisions on development applications take years or are never made. Governance – or the lack thereof – is the major constraint to development on the Wild Coast.

The few successes are due to investments from the private sector and local investors or developers. These individuals acknowledge that local land-rental agreements, profit sharing between the investor and local community, and the provision of other local support and services, are the preferable manner to secure and safeguard business investment; it is also a socially responsible approach. Determined individual developers and hard-won positive community relations characterise successful examples such as Bulungula Ecolodge, Mbotyi Lodge, Coffeeshack Backpackers, Seagulls Hotel, and guided hiking trails linking the coastal hotels (see map below). Direct contributions by investors provide physical infrastructure such as crèches, clinics and school buildings, potable water, IT facilities, IT literacy and internet access for scholars, medical facilities and transport in emergencies.

Misplaced ambitions and the issue of land tenure

It may be a mistake to overestimate the Wild Coast’s ability to attract external investment. There is an inherent contradiction between the concept of a ‘Wild Coast’, implying pristine unoccupied spectacular scenery, and the conventional notions of ‘development’, suggesting middle-class buildings, roads, mines and resorts. Should the Wild Coast become an extension of the KZN South Coast? Every potential development site on the Wild Coast has already been occupied for decades. How can further development occur without destroying that which attracts?

Every coastal management plan since 1979 has adopted the fundamental concept of concentrated development nodes, with varying levels of protected (or conservation) areas between them. Unfortunately, while environmental laws exist and new ones have been enacted, land tenure and appropriate spatial planning laws have not. As an example, the national Spatial Planning and Land Use Management Act, No. 16 of 2013, in its Schedule 2 headed ‘Scheduled Land Use Purposes’, makes no provision for the typical set of mixed land uses which exist across this area. Thus, development cannot legally take place and there is a lack of infrastructure and investment. 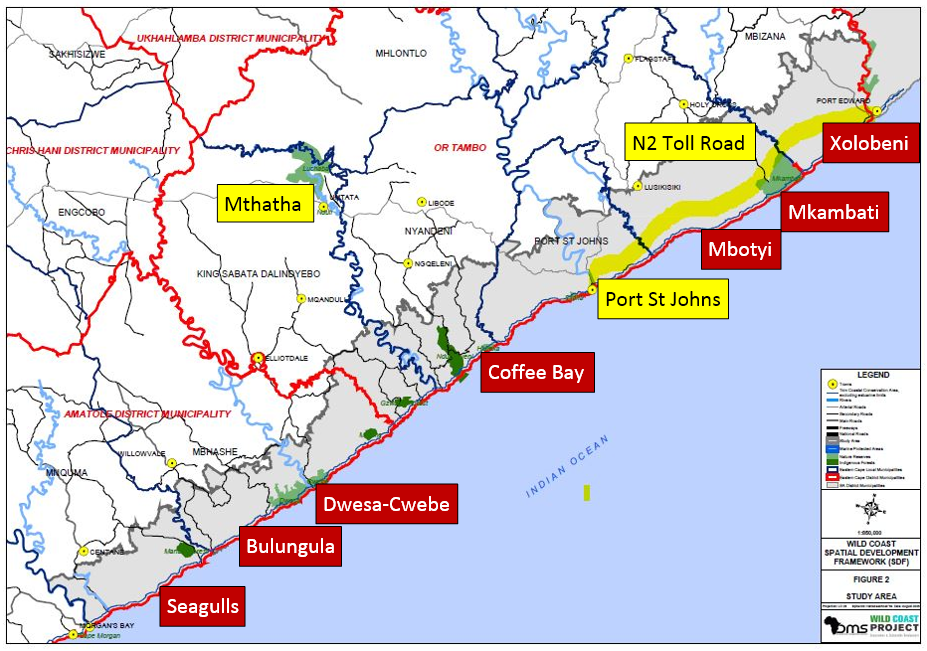 Land tenure issues are a major inhibitor of development. The string of coastal hotels under the management of the parastatal Eastern Cape Development Corporation has changed little in thirty years, without clear ownership: the proposed Mdumbi Lodge development was a fiasco which took years to go nowhere; the Dwesa-Cwebe and Mkambati communities still have no land transfer despite the nationally celebrated restitution settlement agreements of 2001 and 2004 regarding these conservation areas; Coffee Bay remains community land, or land nominally held in trust by the state, in spite of plans from 1983 onwards to proclaim a town with secure tenure; more than a hundred coastal cottages remain in limbo, and are sometimes described as ‘legal illegals’. In contrast, Port St Johns, the only formally established town on the Wild Coast, saw a flurry of post-1994 developments in terms of accommodation. The reason: registered and freehold tenure was available, which provided some legal certainty despite some constraints with regard to infrastructure and local government.

This is not to say that the absence of what is commonly referred to as freehold tenure is the problem and that the provision of such tenure will resolve any and all development challenges. In fact, the provision of this tenure may amount to the dispossession of the land rights of the long-established local residents, may encourage speculation – and is likely to be thoroughly if not forcefully rejected by local communities. Rather; the problem is the absence of any form of legal certainty in any suitable form of land tenure – of which registered leasehold is one example – combined with a general absence of land governance.

A glaring illustration of the problem is the case of wind-farm projects. Numerous such projects with powerful communal benefits have been implemented west of the Kei River. Yet, east of the Kei River, including the Wild Coast, not a single one has been implemented because major investors demand greater security of tenure. This is despite existing policy and tested legal instruments to provide security of tenure in the form of long leases that have clear and direct benefits to local communities, as land-right holders, in the form of land rental and profit sharing.

Life in the Transkei region, including the coastal belt, is not unchanging. The population is definitely moving towards the coastal belt; the anticipated re-routing of the N2 in the northern section of the Wild Coast (as shown on the map) seems to have encouraged this trend some years back already. The conflict that has been experienced by the people and communities most affected by the new road (and the possibility of dune mining for heavy minerals in the same area) have only highlighted the urgency of the need for committed and effective governance in the wake of failure to date.

Note: The term ‘communal land’ is not used in this article. Land rights in the former rural Bantustans and reserve areas are a complex of individual, family and community rights. Formal ownership vests in the state as trustee or sovereign. Post-1994 policy and legislation recognises the de facto ownership of this land by the historic local inhabitants, but in practice the government treats it as state land.

[1] Both authors are former managers in the national Department of Land Affairs in the Eastern Cape, contributors to the Eastern Cape Planning Commission and are currently involved in a review of the Provincial Spatial Development Framework.