Why has manufacturing employment declined so rapidly?

Reads 12,712
Anthony Black, Stephanie Craig, J. Paul Dunne, 3 October 2018
The manufacturing sector has performed poorly and employment has fallen sharply. Policy has tended to push manufacturing onto a more capital-intensive trajectory. Paradoxically, South Africa’s actual (or ‘revealed’) comparative advantage has come to be in relatively capital-intensive products. In contrast, labour-intensive sub-sectors have performed poorly. In a context of high structural unemployment, industrial policy should focus more on supporting employment-intensive growth by subsidising labour and training rather than capital investment, electricity and infrastructure for capital-intensive firms.

Large-scale structural unemployment is South Africa’s number one problem. An important contributing factor has been declining employment in the manufacturing sector. After 1994, the new government continued to liberalise trade, aiming to attract more inward foreign direct investment (FDI) for industrial expansion. However, the manufacturing sector has consistently performed poorly. Its share of GDP has declined rapidly since 1990, import penetration ratios have increased sharply and export growth has been weak.

The context: deindustrialisation in developing countries

In middle-income countries, manufacturing frequently does not directly create new jobs. In most upper middle-income countries, employment in the manufacturing sector is declining, accompanied by a decline in the share of manufacturing in GDP. There is, however, evidence that in developing countries, deindustrialisation is happening at an earlier stage, or ‘prematurely’. This means that the share of manufacturing in GDP peaks sooner, at significantly lower income levels than was the case for countries that now are developed. In many cases, developing countries appear to be deindustrializing without having ever become fully industrialised (for more information, see Black et al. 2016).

One conventional explanation of this pattern is rapid technological progress, but Rodrik (2015) argues that this explanation is less convincing for developing countries. Rodrik assigns much greater weight to globalisation and trade liberalisation as the drivers of premature deindustrialisation than to technological progress. The withdrawal of import substitution policies, together with globalisation, has led to the retreat of manufacturing in countries that lack comparative advantage in terms of the quality and cost of their products (see Black et al. 2016).

By the early 1990s, some trade liberalisation had already taken place. This included a reduction in quantitative controls on imports, the beginning of tariff reductions and significant privatisation. This liberalisation process accelerated after 1994. Average tariffs declined from 28% in 1990 to 23% in 1994 and then decreased right down to 8% by 2006 (Zalk 2014).

Generally there was no shortage of industrial policy interventions and new programmes. However, the net impact is far from clear. The pre-1994 government’s decades-old support for large-scale capital-intensive industries has only been countered to a limited degree. Despite the stated objective to encourage higher value-added and more labour-intensive activities, in practice the weight of support continued to be on large scale capital-intensive activities such as steelmaking, at least until quite recently.

The performance of the manufacturing sector

The growth performance of the South African manufacturing sector since 1990 has been exceptionally poor when compared to that of other countries at similar levels of development. Figure 1 shows the annual growth rates of manufacturing output for selected countries, with South Africa (the purple bar) having one of the lowest growth rates in each of the periods indicated – and especially since 2008. 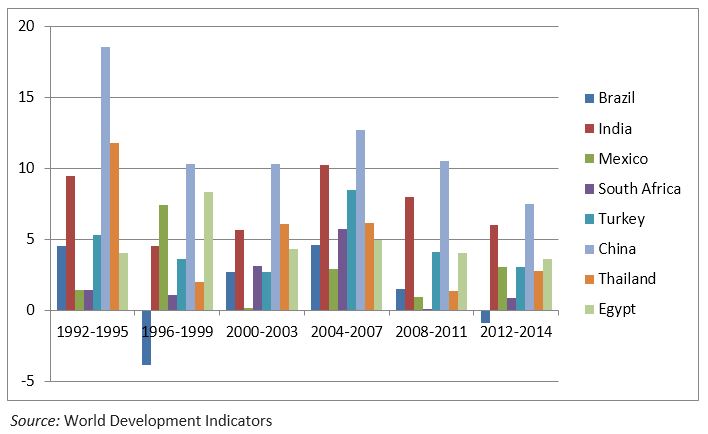 Table 1 shows key indicators of manufacturing performance since 1970. The manufacturing sector’s share of GDP declined precipitously from 24% in 1990 to 13% in 2014 (compare the value-added growth rates in row 2). This resulted in a continual fall in the rate of employment growth from 1970 to 2013, with manufacturing employment in fact declining from 1990 onwards (row 1).

Exports have grown (though somewhat erratically) – but so have imports, notably between 1990 and 2013, responding to the trade liberalisation that started in the late 1980s. This is reflected in the higher ratio of imports to output over the period. Growing import penetration was particularly evident in the labour-intensive sub-sectors, thus putting pressure on corresponding manufacturing employment locally.

One possible explanation, suggested earlier, is that South Africa has adopted strategies that do not exploit potential comparative advantages such as unskilled labour – and rather encourages production in sub-optimal capital-intensive sectors.[1]

Data at the sub-sector level (reported in Black et al. 2016) show that in terms of manufacturing value added (MVA), heavy industry generally did better than most other sectors, while light manufacturing performed poorly, apart from leather and furniture. The share of capital-intensive industry in manufacturing value added grew rapidly until 2000, but has since declined with a corresponding increase in the share of intermediate capital-intensive products (e.g. motor vehicles and parts). Among the labour-intensive sectors, metal products and textiles showed dramatic declines in their share of MVA over the period.

The combination of low output growth and higher capital intensity has been disastrous for employment.

There are a number of inter-related contributors to poor manufacturing performance. Clearly, the overall economic performance of the South African economy has been quite weak and manufacturing has not escaped this. But it does not explain the weakness of manufacturing relative to other sectors.

One explanatory factor could be changes in manufacturing techniques that favour the employment of high-skilled workers over low- and unskilled labour. In turn this could be a function of increasing levels of capital intensity within sectors, or a shift to more capital-intensive sub-sectors within manufacturing.

Another explanation is globalisation and the liberalisation of imports, as suggested by Rodrik (2015). Import penetration in the economy as a whole has increased very significantly and this certainly helps explain the poor performance of labour-intensive manufacturing, in particular. Export growth in manufacturing, on the other hand, has been unimpressive. Thus the economy has been unable to take advantage of the supposed benefits of globalisation.

Below we briefly review developments in capital intensive, heavy industry and light manufacturing.

The share of capital-intensive sectors in manufacturing exports increased from 1970 to 1990, by which stage it accounted for over 50% of the total (see Black et al 2016). As a result of weaknesses in mining and electricity constraints, its share has declined somewhat but it remains the leading export sector within manufacturing. The dominance of heavy industry reflects a number of factors.

First, heavy industry has benefitted enormously from very substantial direct and indirect state support, including cheap, coal-based energy. Secondly, the monopoly power of large upstream producers of intermediate products in sectors such as steel and chemicals has profoundly disadvantaged more labour-intensive downstream production (Roberts & Rustomjee 2009). A lack of competition has enabled these large firms to raise their prices to equal those of equivalent imported products (i.e. import parity pricing). This means that local manufacturers of metal and plastic products, which use those intermediate inputs, have derived no advantage from the actual low domestic production costs of key inputs such as steel, aluminium and basic chemicals.

Whilst the clearly stated objective of industrial policy is to restructure the economy to promote growth and jobs, some of the very substantial support programmes provided by government have reinforced rather than altered our historically distorted pattern of industrial development that favours heavy industry above more labour-intensive sectors.

The poor performance of light manufacturing is particularly problematic for employment. Other upper middle-income countries such as Turkey, Malaysia, Thailand and Mexico have strong labour-intensive export industries (Black et al 2016). The poor performance of these sub-sectors is especially disturbing given that South Africa’s poverty and unemployment rates are far higher than any of these countries. The share of ultra-labour-intensive manufactured exports has been in sharp decline since 1970; by 2012 this category represented only 9.7% of manufactured exports. The decline on overall output has been most dramatic in the (labour-intensive) textiles and clothing sectors. Their share of manufacturing output declined from 7.6% in 1990 to just 1.8% in 2010.

Policy has failed to promote light manufacturing in a number of areas. Incentives have been minimal compared to those in capital-intensive sectors, while training and other support measures for labour (including employment subsidies) have been inadequate; also, aspects of labour regulation have constrained expansion. This has all taken place against a backdrop of declining protection.

The manufacturing sector has performed poorly in terms of its contribution to GDP, export expansion and competing with imports. At least until quite recently, many policy measures have tended to push manufacturing onto a more capital-intensive trajectory. One result is that, somewhat paradoxically, South Africa’s actual (or ‘revealed’) comparative advantage has come to be in relatively capital-intensive products. This has been highly negative for employment.

However, international competition in labour-intensive tradeables cannot be avoided and for the unemployment rate to be reduced, South Africa needs to do much better than it has been doing. This does not mean that wages should be driven down, although policy does need to investigate specific labour-market rigidities. The nature of industrial policy must depend on context and the South African context is one of massive structural unemployment. Thus, industrial policy should focus on improving economy-wide efficiency and should support more employment-intensive growth. Incentives should subsidise labour and training rather than capital investment, electricity and infrastructure for capital-intensive firms.

[1] Lin (2009) refers to such strategies as being ‘comparative advantage defying’ (CAD).