Reads 94,226
Ivan Turok, 12 August 2015
Informal urban settlements have a poor reputation as hotspots of social unrest, squalor and crime. Yet there is another side to them: as communities that are determined to lift themselves out of poverty via jobs in the city. In a society marked by severe social and spatial inequalities, these places may be useful vehicles for upward mobility. The ambivalence of government policy towards informal settlements needs to be replaced by a more positive approach.

Almost one in five residents of South African cities live in a shack, most of which are densely clustered in informal settlements. These areas present the country with some its biggest dilemmas. Shack dwellers are exposed to hardship, insecurity and hazards from living in squalid and overcrowded conditions on unserviced and sometimes unsuitable land. They believe they deserve better, which fuels their growing discontent and violent protests.

All spheres of government are ambivalent about informal settlements and do not know how to address the issue. They believe that illegal land invasions should not be rewarded and they lack the skills and capabilities to work with disaffected communities on joint problem-solving. In the absence of a clear policy, there are all sorts of piecemeal responses, ranging from small initiatives to upgrade these areas and disaster relief schemes, to forced evictions.[1]

In the absence of systematic evidence on whether informal settlements help or hinder human progress, all kinds of myths and implicit assumptions flourish. This is not a sensible basis for making policy.

Recent research (Turok & Borel-Saladin 2015) explores whether there might be a rationale for treating informal settlements differently. It provides preliminary evidence to answer key questions: (a) Is it possible that shack areas might serve a useful purpose in the broader scheme of things – perhaps explaining why these places emerge and grow? (b) Could shack settlements provide a path to social mobility which helps to narrow the gap between rich and poor communities?

There has been very little research into the influence of shack settlements on people’s chances in life. Thus there is little understanding of whether the sacrifices that people make by living in unsanitary and insecure urban conditions pay off by providing access to better economic opportunities.

A popular stereotype is that these are isolated enclaves or ‘no-go areas’ occupied by squatters who are anti-social, uneducated and generally desperate. Another is that people opportunistically invade hazardous sites in order to leapfrog others on the waiting list for free RDP housing (Tissington et al. 2013). Such perceptions encourage a hostile response, or at least policy neglect that is based on the assumption that squatter settlements will gradually disappear as people find better housing options.

Such accounts are too narrow to make sense of the phenomenon and inform good policy. One needs to identify the main drivers and dynamics at work. This requires careful analysis of the interactions between people, places and economic activities. In particular, one must understand the relationship between household aspirations, their choice of settlement and the availability of jobs.

Drawing on the international literature, it is possible to distil two contrasting perspectives on shack areas. They are summarised in table 1 on the basis of the three dimensions shown in the left column. Note that any particular settlement is likely to reflect some mixture of the two. The balance is bound to vary depending on labour-market conditions, population growth and the location of the settlement.

Table 1: Contrasting perspectives on the role of informal settlements

Perspective 1: Informal settlements as ladders out of poverty

This perspective suggests that informal settlements help to lift rural households out of poverty through providing access to urban jobs. They are affordable entry points into city economies where migrants can obtain useful information, skills and job contacts. Over time, many may acquire new skills and advance upwards and outwards to superior housing in better neighbourhoods. In the words of the influential US economist Ed Glaeser: ‘urban slums often serve as springboards to middle-class prosperity’ (2011: 74). Thus, these places are symptoms of poverty, but also potent means for escaping poverty because they enable migrants to become integrated into the city economy.

The substandard character of these reception areas helps to contain the cost of living for workers with low-paid, entry-level jobs. The most popular shack settlements are well-located in relation to jobs in order to save on transport costs. Some are close to middle-class suburbs so people can readily become domestic workers, gardeners or security guards. While their makeshift structures are small and often crowded, they provide flexible arrangements that suit people’s irregular earnings. Informal settlements also encourage people to generate their own livelihoods by giving aspiring entrepreneurs confidence and connections. Their informal enterprises benefit from cheap premises and local social networks.

People moving to shack areas are motivated, tenacious and resourceful. They do so out of choice and in response to a labour market that signals a higher demand in urban areas. Superior opportunities in the city give people greater hope and aspirations for a better life. This spurs a strong sense of purpose to overcome hurdles and to learn how to become more productive. Without the security of extended families or subsistence farms to fall back on, people help each other out and share resources. This develops resilience within the community to withstand adversity and engage in self-improvement. It also promotes social vibrancy and personal initiative.

According to this view, the government should make it easier for people to migrate towards urban opportunities by providing basic education and household services. Investing in people will give them more choice about where to live and what jobs to compete for. Costly settlement improvement schemes should be avoided because they will only raise living costs and complicate migration into urban areas.

From the alternative perspective, shack areas are seen as perpetual features of the urban landscape that demonstrate low social mobility and structural impediments to progress. Self-reliance is no match for the systemic barriers that impede human development and an escape from poverty.

From this perspective, people move to shack areas under duress, prompted by rural insecurity and misery. Lacking the skills that employers expect, migrants end up at the back of the queue for jobs. Their best chances are for the lowest-paid, least desirable positions that no-one else wants. High unemployment keeps wages low and working conditions poor, so people get stuck in dead-end, precarious jobs. Some eke out a living by scavenging garbage on landfill sites, recycling waste, keeping small livestock or collecting wood to sell on the roadside.

Repeated job rejections sap morale, people get discouraged and detached from the world of work and the stress damages their subjective well-being. Exposure to recurrent crime, violence and illness further undermines their hopes and quality of life. Community cohesion is weakened by the ongoing strain on households, the competition for scarce resources, and the actions of local gatekeepers who enrich themselves by extracting excessive rents.

Shacks are located on marginal land that is exposed to the risk of storms, flooding, fire and disease. People suffer physical harm, psychological setbacks, disrupted livelihoods and lost property from these periodic disasters. The threat of eviction limits their attachment to the place and discourages them from investing to consolidate their position in the city. Many behave as temporary migrants and remit any spare money to their families in rural areas.

Informal settlements remain detached from the rest of the city. Insecure household incomes discourage the building of private houses and loans from banks, so few manage to advance onto the next rung of the housing ladder. Residents get second-class schools, health care and infrastructure, which dampen the prospects of future generations. Government neglect also leaves a vacuum for undemocratic opportunists to exercise control and promote their own interests.

Systematic research is required to assess which scenario dominates in South Africa. A preliminary analysis, using cross-sectional data on people’s place of residence from the Labour Force Survey of StatsSA, provides some evidence to support both ideas. (More definitive conclusions will require longitudinal data that tracks the progress of individual households over time.)

Figure 1 shows the employment rate (the proportion of working-age adults with a job) over the period from 2008 to 2013 for residents of rural, informal urban and formal urban areas, where the latter includes suburbs and formal townships. [Note that this data indicates the area where they live rather than where they work – the place of work may be elsewhere and in either the informal or the formal sector.] 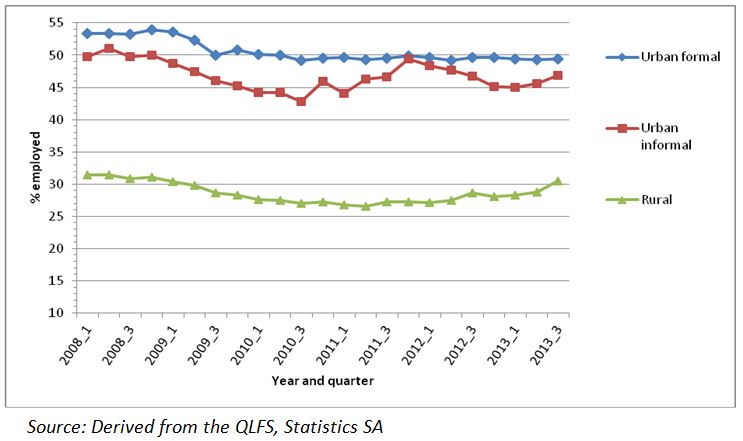 One could interpret this as support for the ‘ladder-to-work’ scenario. However, the earnings of people provide contrasting evidence. Figure 2 shows the distribution of income for employed adults from the three areas of residence. Far more workers living in informal settlements are low paid compared to those in formal urban areas: 85% of workers that live in informal settlements earn less than R6 000 per month (gross), compared with 61% who live in formal urban areas. Conversely, there are relatively few middle-income earners (above R11 000 per month gross) residing in informal settlements. The income profile of shack dwellers actually is closer to that of workers who live in rural areas (where 84% earn less than R6 000 per month).

Other evidence suggests that shack dwellers are also stuck in precarious kinds of jobs with little prospect of progression. Jobs with low earnings and poor prospects are more consistent with the poverty-trap, or cul-de-sac scenario.

There is some sign of progression out of poverty in that many more shack dwellers have jobs than people living in rural areas. However, the low earnings of people living in informal settlements mean that, for the vast majority of them the extent of their material improvement (compared with that in rural areas) is limited. Many of these jobs also are insecure.

Living in the city seems to help people in informal settlements to gain access to economic opportunities, but the quality of these jobs is modest. Few shack dwellers appear to progress beyond entry-level or low-skilled jobs. Such limited upward mobility could be a reason why there is so much frustration and social unrest in these communities.

At the moment it is too soon to say with any certainty whether informal settlements help to reduce social and spatial inequalities in South Africa. A deeper understanding of the interactions between people, places and jobs is essential for more appropriate policies to realise the positive potential of informal settlements. Further research and better data are required to track households over time in order to analyse the extent of social mobility and whether migrants from rural areas improve their economic status after moving to informal urban settlements. Another objective would be to identify which settlements in which cities have the greatest positive effect – and why.

Glaeser, E. (2011) Triumph of the City: How our Greatest Invention makes us Richer, Smarter, Greener, Healthier, and Happier, London: Macmillan.

[1] SANRAL’s clearance of 800 people from Lwandle, outside Cape Town, in June 2014 was the latest heavy-handed response. It has subsequently been declared illegal by the courts.