Reads 6,276
Christine Jeske, 2 July 2018
Unemployment research typically inquires how to generate more jobs and how to keep workers working. Researchers often probe the reservation wage level (which appears to balance the interests of employees and employers). Qualitative research findings suggest that wages may be less significant factors in work-related decisions than the nature of interpersonal relationships in the workplace. Both employees and employers emphasise the importance of the quality of relationships, though employers and employees highlight different factors.

Why do workers leave paid jobs or stop searching for jobs? And what drives employers’ decisions about job creation? Most research on these topics focuses on getting the price of labour right (Burger, Piraino & Zoch on Econ3x3, 2017; Nattrass & Walker 2005). Many researchers have tried to understand the threshold of reservation wages above which people seek, or will accept, employment. This article, based on a longer article (Jeske 2018), asks not what are people’s reservation wages, but what are people’s reservations–are they wages at all?

While pay and profit are not irrelevant to decisions about work, an over-emphasis on monetary factors may hide the issues that employees and employees most frequently cite as relevant. The author spent a year conducting ethnographic research in peri-urban KwaZulu-Natal. This included semi-formal interviews with 77 Zulu South Africans who were either unemployed, self-employed or earning low wages, as well as White and Zulu owners and managers of 25 businesses.

What do employees want?

Of 77 employed and unemployed people interviewed about their work history, about half (39) mentioned that they had quit a job they had disliked. Figure 1 shows the frequency of the reasons given by these persons for leaving the jobs (with some respondents’ providing more than one reason).

Of those who gave reasons for leaving a job, the most common involved interpersonal relationships. Fifteen cited poor treatment by an employer, including five mentions of racism and one of sexual assault. Eight mentioned problems with their co-workers, including backstabbing, false accusations and jealousy.

Figure 1: Reasons given for having quit jobs 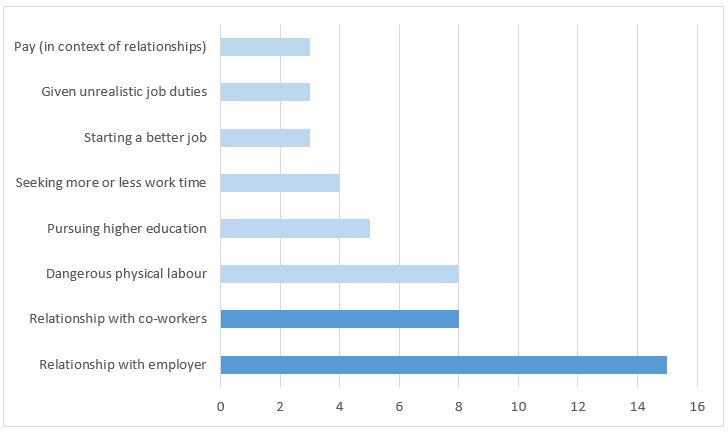 Only three people cited a low wage as a reason for leaving. Whenever pay was mentioned, people talked about it in the context of human valuation, as in, ‘I was not paid enough to put myself in that danger’, or ‘… only the old people will take that kind of pay, because … they don’t have a relationship with the boss to speak up.’

The frequency with which people left jobs as a result of the way in which they had been treated by employers or co-workers suggests that something more than pay drives work-related decisions.

People commonly spoke of work primarily as a relational experience. In their work histories, people often listed jobs not by the name of the company, place, or work duties, but by the name of the employer. In defining ‘right’ relationships and talking about satisfying work experiences, people often used the word ‘respect’ (inhlonipho), claiming it as an imperative in both work and community relationships. Many people appreciatively described positive, respectful relationships they had experienced even in low-wage jobs. They listed ways in which employers fostered such relationships. These included: rotating all workers into leadership roles, paying portions of employees’ children’s school fees, expressing gratitude, having employees at all levels share lunch rooms, offering individualised training, and signalling trust by prioritizing relatives of current employees when hiring.

Relationships among co-workers also affected whether employees remained in jobs. Middle-level black managers, especially when young or female, often mentioned how difficult it was to avoid inciting jealousy among those they supervised. Conflicts often arose because persons were promoted to higher positions than others who were seen as having culturally higher status because of age, gender or experience. Hence co-workers frequently accused the promoted ones of ‘acting above their level’ in society. Such jealousy and disdain often prompted various forms of mistreatment that could cause people to quit.

Likewise, interpersonal relationships in workers’ home communities played a role in work-related decisions. The responsibility to earn money as a breadwinner often drove people to seek work, but responsibilities also had the potential to drive people out of work. The work opportunities available to low-skilled workers often prevented them from spending time with children, partners and parents. Their lack of time with dependents often caused conflict that could lead them to quit, as happened when employees were laid off after spending too many days preparing for a father’s funeral or taking a daughter to a medical appointment.

Relationships at home were often further strained because low wages had to be spread too thinly among dependents. People in low-wage jobs often described pay-day as the most stressful day of the month because they could not adequately meet the financial requests of their dependents. Dependents put pressure on breadwinners by using various social sanctions such as accusing them of using witchcraft to gain their wealth or, conversely, by attacking them using witchcraft (see also Ashforth 2005). Several interviewees spoke of the predicament of needing to earn money whilst knowing they would keep little of their wages – having a job changed their relationship with relatives from that of a dependent to the breadwinner. One interviewee had gone so far as to switch to a lower-paying job because the timing of pay-days allowed her to better manage financial requests from family members.

This is not to say that pay does not matter. In listing their reasons for starting jobs, employees nearly always cited pay-related reasons, but the reasons were often tied to shifts in relationships such as the loss of a breadwinning relative or the birth of a child. Especially for young people with higher skills, such social shifts could create the need for quick money, which could cause people to postpone higher education or to take jobs for which they were overqualified. Thus the need for money could push people into less desirable jobs, but money still played a part in the context of relational variables. And once in a job, when relationships went badly, money was not enough to keep people in jobs.

What do employers want?

One business owner explained, ‘The general trend is to automate and employ fewer people; the reason for that being [that] machinery doesn’t go on strike, machinery doesn’t come to work drunk, machinery doesn’t cause problems.’ He expressed the prevalent sense of distrust between employers and employees, but he also demonstrated the positive side of these findings. Employers who generally appear to be trusting and non-prejudicial towards their employees and the workforce in the area, also tend to be more likely, and motivated, to readily increase employment: ‘If you find a good person,’ he stated, ‘even if you haven’t got a job for them, you find a job and you retain that person.’

Researchers often assume that unemployment results from factors such as the following: a mismatch of skills, the area in which workers live, workforce growth outpacing the number of jobs created, and inflated wage levels (Altman & Valodia 2006; Banerjee et al. 2008; Kingdon & Knight 2004). The findings reported here indicate that the quality of interpersonal relationships is also an important determinant of unemployment, as it influences employers’ decisions about the labour force and workers’ ability and motivation to seek and retain work.

The factors listed by job-seekers and employers alike as influencing whether they offered, sought, or retained jobs had less to do with wages than with good relationships in the workplace. On the employee’s side, these factors included both their treatment at work and their ability to relate to other people within their home communities satisfactorily. While wages can influence both workers’ perception of their treatment at work and their ability to provide adequately for their dependents, other factors often override their earnings levels. These factors included their employer’s demeanour, workers’ inclusion in decision-making and leadership, perceived social distance between employee and employer, and the overall level of trust between employees and employers.

These findings point to the importance of further research to investigate effective measures to improve interpersonal relationships in and around the workplace. Such studies could further examine non-wage factors that affect work decisions, including measures that could improve relationships at little or no cost. These could include: flattening institutional hierarchies, building gratitude into workplace routines, improving policies for handling workplace disputes, and otherwise improving trust and communication between managers and employees. Further studies of wages should take into account that monetary and non-monetary dimensions do not have independent effects on decisions in the workplace: wage increases do not merely offer a draw to potential applicants; they offer a way for employers to communicate to workers that they are valued in the relationship. Wage increases form part of a larger set of ways in which employers and policy makers can improve relationships between employers, employees and dependents – thereby improving employee retention and job creation.

Jeske C. 2018. Why work? Do we understand what motivates work-related decisions in South Africa? Journal of Southern African Studies 44 (1).