Reads 3,260
Wandile Sihlobo, 2 December 2020
The Covid-19 pandemic presents an opportunity for African governments to relook agriculture as part of the economic recovery plan. A new approach should embrace technology (information technology, mechanical and biotechnology) and private-sector partnerships, as well as the improvement in land governance through the extension of title deeds or long-term, tradeable leases. South Africa presents some examples, particularly on technological advancement, which African countries can emulate.

Agriculture remains an important economic sector in the sub-Saharan Africa region (Goedde, et al. 2019). Yet, when various countries start to craft their economic recovery plans following the devastation caused by the COVID-19 pandemic they will need to think differently about the sector.

A lot has been said about the need for basic infrastructure such as roads, ports and electricity. However, there are some basic things that, if executed properly, will significantly aid the recovery. Much of agriculture depends on the effective (and timely) execution of the administrative and regulatory tasks of government: licenses, permits, regulations, enforcement, etc. (Goedde et al. 2019). These aspects have been constraining the growth and transformation of the agricultural sector for many years and require serious attention. Linked to this is a good land administration system, effective registration of title deeds/land rights in a well-functioning deeds office.

Many sub-Saharan Africa countries still have weak property rights. This not only leads to lower levels of investment but also poor management of the land (The Economist 2020). The road of economic recovery from the pandemic presents an opportunity for governments to explore available technologies that could help in the registration of land rights. These include GPS systems and mapping and blockchain technology. This will help to solve disputes, contestation and also help with tradability of rights.

This process can be piloted in agricultural land and thereafter encourage private-sector players to partner with new landowners in further development of the farms. The proper recording and confirmation of land rights will encourage individual entrepreneurs to invest in their farmland and thereby trigger the commercialisation and growth of the agricultural sector.

There are examples of technologies that countries could readily use, such as the use of drones in India and aerial photography in Rwanda. This would also help change the troubling statistics that highlight that roughly 90% of rural land in Africa is not formally documented (The Economist 2020).

From a biotechnology perspective, and to date, South Africa is the only country in sub-Saharan Africa that has embraced the use and potential of biotechnology (Okeno et al. 2012). This is primarily due to South Africa being the only country that has adopted the use of genetically engineered cotton, maize and soybean seeds, joining the likes of the United States, Brazil and Argentina, among others. In these countries, the use of the genetically engineered seeds has seen lower insecticide use, more environmentally-friendly tillage practises and crop-yield improvement over the years, as illustrated in a research paper by agricultural economists Brookes and Barfoot (2020).

There is also compelling evidence of the increase in yields within the sub-Saharan Africa region. South Africa, which produces about 16% of sub-Saharan Africa maize, according to the International Grains Council, utilises a relatively small area of an average of 2.5 million hectares since 2010. In contrast, countries such as Nigeria planted 6.5 million hectares in the same production season – but only harvested 11.0 million tonnes of maize, which is 15% of the sub-Saharan region’s maize output. Irrigation has been an added factor in South Africa, but not to a large extent as only 10% of the country’s maize is irrigated; 90% is being rainfed as in the other sub-Saharan Africa countries (Venter 2020).

South Africa began planting genetically-engineered maize seeds in the 2001/02 season. This process was supported by both the private sector and government, as a form of a public- private-sector partnerships in modernising and growing the South African agricultural sector. Before its introduction, average maize yields were around 2.4 tonnes per hectare. That has now increased to an average of 5.9 tonnes per hectare (2019/20 production season). Figure 1 shows the significant increase in maize yields in this period. 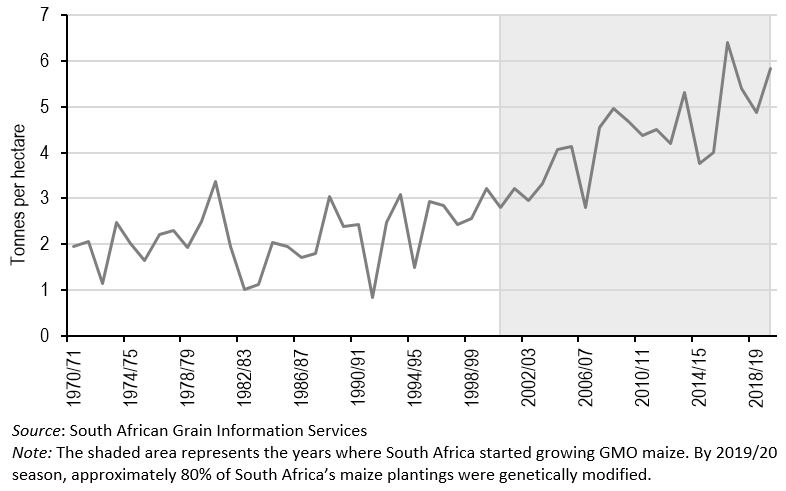 With agriculture currently making up an estimated 23% of the sub-Saharan Africa economies, while some countries remain net importers of food and agricultural products, a concerted focus on this sector as part of an economic recovery plan for the region is justified (Goedde et al. 2019). This would also have positive spin-offs to curb the growing hunger in the region, specifically in countries such as Zimbabwe (WFP 2020).

Countries like Kenya and Nigeria, which are increasingly field-testing genetically engineered crops, should accelerate the process. When it meets their scientific standards, they should embark on commercialisation as part of the recovery process. This should include increased private-sector participation regarding the supply of the technology, as is the case in South Africa and other countries such as Brazil, United States and Argentina. Each country will have their domestic regulatory process which safeguards consumers and farmers, but these must not be too prohibitive to the extent of disadvantaging the very same farmers they are intended to protect. A case in point is Zimbabwe, where the importation of the genetically-engineered maize has recently been permitted (Sihlobo 2020), but planting by domestic farmers remains prohibited.

In a nutshell, African governments should have a fresh look at agriculture, embracing technology (information technology, mechanical and biotechnology) and also private-sector partnerships. There also needs to be confidence in the citizenry to manage their land parcels. This will involve the granting of title deeds or tradable long-term leases in various African countries. In the case of better seeds, the evidence from South Africa is there for many countries to observe and learn (Gouse et al. 2016).