Between the devil and the deep blue sea? The financing of higher education

Reads 13,630
Philippe Burger, 22 September 2016
Higher-than-inflation increases in student fees since 2009 often are blamed on declining government subsidies to universities. This is not entirely correct, if one considers real per-student subsidies. Fee increases resulted mainly from cost pressures faced by universities due to growing student numbers and a weakening rand. These pressures will not disappear. Eliminating government wastage is not a durable solution and difficult choices cannot be avoided. So, who should pay for increasing costs, students or government – or which combination of these?

The #FeesMustFall campaign of 2015 has placed the financing of higher education at centre stage in the country’s political arena. Students complain that student fees have increased at rates higher than consumer price inflation. This has indeed been the case from 2009 to 2015, with the rate of fee increases exceeding consumer price inflation by two percentage points on average.

In the popular press and in policy discussions, the higher-than-inflation increases in university fees since 2009 have been blamed on a decline in government subsidies to higher education institutions. It is not always clear what these commentators mean by ‘a fall in government subsidy’. Below I demonstrate that the only sense in which government’s subsidy to the university sector has declined is as a percentage (or share) of total university income (all universities combined). However, the real per-student subsidy remained virtually unchanged during the past decade. But then, if the real per-student subsidy has remained unchanged, why have students’ university fees increased faster than the consumer price level? I show that this is due to cost pressures that universities have faced. This raises the question: who should pay for the higher-than-inflation cost increases, government or students?

University subsidies and fees: what do the numbers really show? 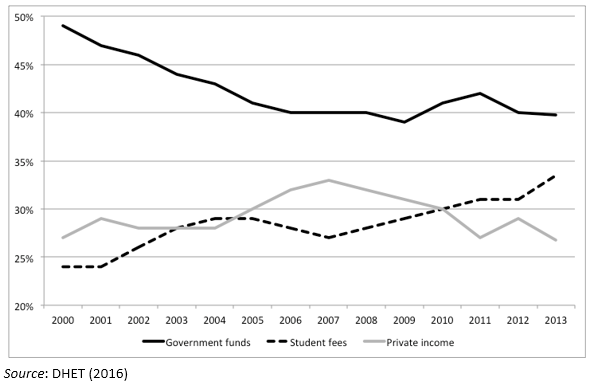 However, a falling subsidy ratio does not necessarily mean that subsidies have declined in absolute rand terms (whether in nominal or in real, inflation-adjusted terms). Neither does it mean that subsidies have fallen in per-student terms. Moreover, the subsidy-to-income ratio could also have fallen simply because, for whatever reason, the denominator (income) increased faster than the numerator. This is indeed what happened.

First a note of caution: although the contribution of subsidies to total university income for the sector fell up to 2005, we should approach the comparability of universities’ income figures pre- and post-2004 with care. In 2004/5 the higher education sector in South Africa experienced a significant restructuring, with many universities merging or being incorporated. Universities that previously were apartheid-era universities for blacks or Indians, such as Vista University, the University of Durban-Westville (UDW) and the University of Bophuthatswana, were merged with predominantly ‘white’ universities. The restructuring left affected universities with significantly changed income and cost structures. Typically, before the mergers, traditionally black universities charged lower fees than traditionally white universities. Hence, mergers meant higher student fees for the ‘new’ students attending the newly merged institutions – and subsequently also an increase in income from student fees for the sector as a whole. The latter could partly explain the increase in the contribution of fees to total university income in the early 2000s (in figure 1, the rising black dashed line from 2001 to 2004).

To proceed: The subsidy-to-income ratio is affected by changes in other sources of income (the denominator). Therefore, focusing on this ratio is not the best way to assess changes in the role of subsidies in funding higher education. Rather, we should ask whether or not the real government subsidy per student has declined. Figure 2 shows the subsidy per student in real (inflation-adjusted) terms. 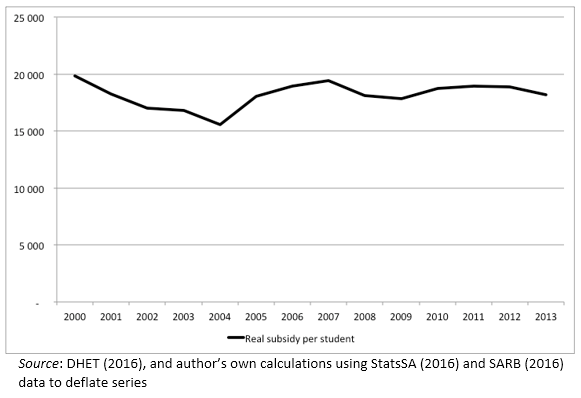 Between 2000 and 2004 (in the lead-up to the mergers and restructuring), the subsidy per student fell by almost 25% in real terms. So, the decline in the contribution of subsidies to the universities’ total income in the early 2000s (as in figure 1) can partly be ascribed to a falling subsidy per student. However, since 2005 the real subsidy per student has recovered and has remained relatively stable at roughly R19 000 per student (with 2010 as base year). Therefore, in real per-student terms, it is simply untrue that the government’s subsidy has declined since 2005.

Why have university fees increased faster than consumer inflation?

Student fees have increased faster than inflation for two reasons:
1) The interaction between the funding of fixed costs and changes in the composition of university income streams.
2) Cost pressures emanating from a deteriorating rand/dollar exchange rate.

First, let us consider the interaction between the funding of fixed costs and changes in the composition of universities’ income streams. In the period between 2007 and 2013, student numbers increased at a significantly faster rate than universities’ activities that generate private income. As a result, teaching activities grew relative to private-income activities, and therefore had to carry (i.e. fund) a larger portion of the fixed costs of universities (which include large components of regular staff expenditure and overheads related to buildings and equipment). To cover a commensurate larger portion of universities’ fixed costs, student fees simply had to increase.

To consider the decline of private income in more detail, figure 3 presents the real percentage change over the full period (i.e. not per annum) between 2007 and 2013 in the three main income sources of the top ten universities in South Africa.[1] Half of the top-ten universities registered a real decrease in their private income (the hashed bars), while several others registered only small percentage increases (at most 10%) over the period. 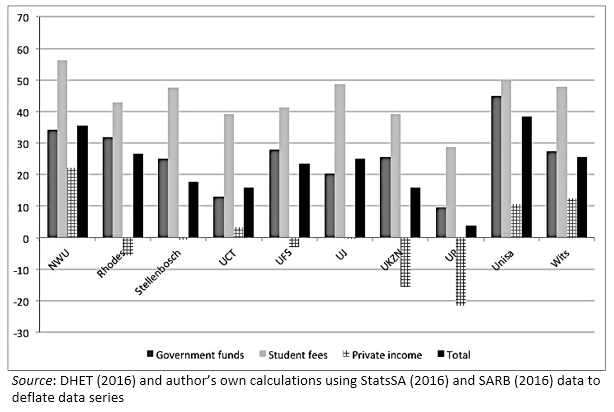 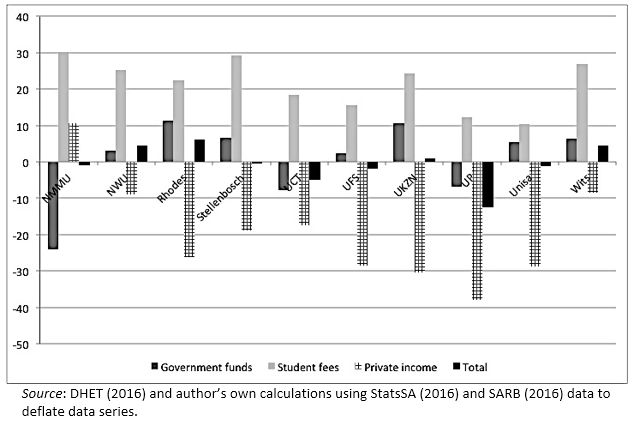 This implies that teaching-related activities have grown to constitute a larger proportion of universities’ activities – and therefore need to carry a larger proportion of universities’ fixed costs. Therefore, student fees have had to increase to make up for the lower proportionate contribution to fixed costs from (declining) private income – hence the significant increases in real fees per student shown in figure 4 (the grey bars).

Universities have to import books, subscribe to international journals, pay page fees for articles published by academic staff in international journals, buy imported equipment for laboratories and software for research and teachings. All these are directly affected by a weakening rand; thus universities are particularly exposed to exchange rate risk. If government subsidies do not increase to cover these costs, and private income per student falls, raising student fees is the only remaining way to do so and sustain the quality of higher education and research.

Since 2005 the government subsidy per student has remained largely constant in real terms. But this has been insufficient for universities to absorb the increasing cost pressures facing them. As a result, student fees have been increased at rates that exceed CPI inflation.

The cost pressures faced by universities will not disappear should higher education become ‘free’. If fees were to be abolished, expected continuing large increases in student numbers and a likely deteriorating rand would merely mean that, instead of fees, the governments subsidy would have to increase at a rate that exceeded consumer inflation.

For the government to adopt such a path of fully subsiding students and abolishing student fees is just not sustainable, given other public services such as health and social welfare that must also be financed from the national budget. Even if major instances of government wastage can be eliminated, or ‘money found’ somewhere in the 2017 budget, or some taxes increased, those will produce largely one-off impacts (important as they may be). In recurrent budgetary years, the fundamental choices that must be made, in the allocation of the (then) available budgetary funds, between competing social and economic needs unfortunately will not go away. This cannot be ignored in the current debate on the affordability of higher education.

Thus, even if a student is poor when he or she enters higher education, a qualification means such a student is unlikely to stay poor afterwards. A higher education qualification means that he or she subsequently joins a privileged minority. Why should other people be paying for that privilege? Therefore, to the extent that students will personally benefit in future, they should at least partially pay for the increases in the cost of higher education – partially, because of the public good component of higher education. This means that to the extent that society (and not only the student personally) benefits in the future, government should also pay more and thus increase the real per-student subsidy to help fund cost increases.

Estimating what part the student should pay and what part the government should pay is not impossible. There are estimates available that indicate what additional income a student is likely to earn in future as a result of obtaining a higher education. As long as student fees do not exceed the discounted present value of such expected additional earnings, the student will receive a positive return on his or her education. Thus, an investment perspective provides a justifiable guideline that will cap what we can expect students to pay. Of course, for poor students entering higher education, a sufficient student loan scheme that enables them to pay their student fees should exist. A loan system means they still have to pay, albeit at a later stage.

In the next years student numbers will in all likelihood continue to grow strongly. In addition, universities’ private income will probably continue its lacklustre growth due to a weak economy. The weak economy also does not bode well for the exchange rate. Universities will in all likelihood continue to experience significant cost pressures in the foreseeable future. Providing higher education will remain expensive. Somebody must pay. If they want to have it, both government – investing in society – and students – investing in their own futures – will have to pay for it. Higher education cannot be ‘free’, i.e. paid for only by government (i.e. taxpayers). The question that we need to talk about (using rational guidelines as in the previous paragraph) is the relative contributions of students and government. That will require serious and committed engagement that avoids either-or approaches.