Does moving to a city mean a better life? New evidence

Reads 15,119
Ivan Turok, Justin Visagie, 16 April 2018
Moving to a city in search of work seems to pay off for many poor people in the countryside. Data that track changes over time indicate that as many as 385 000 people were lifted from poverty between 2008 and 2014 after moving from rural to urban areas – their poverty levels were halved together with a fall in unemployment. Government ambivalence about urbanisation should be replaced by a more positive and pro-active approach.

The fate of people who uproot themselves from the countryside and migrate to cities is widely discussed. Conventional wisdom says that most end up living in shack settlements where they struggle to make ends meet because they lack the skills to compete for the paltry jobs available. Their frustrations give rise to community protests, land invasions and other forms of anti-social behaviour.

An alternative scenario is that by sheer determination they manage to grasp some kind of urban livelihood and gradually claw their way up the job ladder. The outcome is of enormous significance throughout Africa because of the unprecedented scale of urbanisation currently underway. And so, should governments seek to slow down the process, or accept its inevitability and manage it as best they can?

Our recent research suggests that urbanisation in South Africa has been an important source of upward income mobility over the past decade (Visagie & Turok forthcoming). As described and shown below, our estimates from the National Income Dynamics Study (NIDS)[1] indicate that as many as 385 000 people were lifted above the poverty line between 2008 and 2014 after they had moved from rural to urban areas. They became better-off by gaining access to the labour market. The progress achieved is all the more surprising considering the depressed state of the economy since 2008.

Is urbanisation good for development?

Historically there has been a strong relationship between urbanisation and economic development in many parts of the world (Collier & Venables 2017). Cities function as catalysts for prosperity that can generate economies of scale and scope through reduced logistics costs, shared services, specialised suppliers, thick labour markets and knowledge spill-overs (Glaeser 2011; Storper et al. 2015). However, the benefits of density and proximity are not automatic. Many African cities suffer from negative externalities such as congestion, infrastructure bottlenecks and pollution (Turok & McGranahan 2013; Farole & Sharp 2017). The question is not how to curb the growth of cities, but how best to harness the energy and productive potential of intense human interaction in concentrated populations?

Two-thirds of South Africa’s population now live in urban areas, up from only half in 1994. The Gauteng city region has grown more rapidly than other places, with net in-migration of 1.4 million people between 2001 and 2016 (StatsSA 2017).

Has moving to the city offered rural residents an escape from poverty or a dead-end of squalor and hardship? Despite the overall benefits of urbanisation, many migrants are disadvantaged in the search for decent work through their lack of relevant skill-sets and work experience, their weak social networks and poor transport connections to centres of employment. People moving into informal settlements are particularly vulnerable to inadequate shelter, deficient basic services, environmental hazards and violent crime (Turok & Borel-Saladin 2016).

Figure 1 shows the impact of the decision to move from a rural to an urban area in South Africa on income poverty, based upon estimates from the NIDS data between 2008 (wave 1) to 2014 (wave 4). The NIDS tracks individuals over time, which allows us to compile compelling evidence about their ‘before’ and ‘after’ status when they migrate. We calculate changes in the poverty rate for three groups: those who remained in rural areas (blue line), those in urban areas all the time (yellow line), and those who migrated from rural to urban areas[2] (dashed orange line). Whilst those who stayed where they were experienced a slight decline in poverty rates, those who migrated to an urban area experienced a sizeable decline, crossing the stark divide between rural and urban poverty levels.

Before their move to the city, the large majority of migrants were destitute in their rural communities, with levels of poverty above 80% (i.e. more than 80% of individuals had a monthly income below the poverty line).[3] Six years later, the level of income poverty for these migrants (now living in an urban environment) had more than halved to below 35%. Meanwhile, the poverty level for individuals who remained in the countryside stayed very high at 70% (i.e. it also declined from an initial level above 80%, but much less).

Figure 1: Percentage of people below the income poverty line 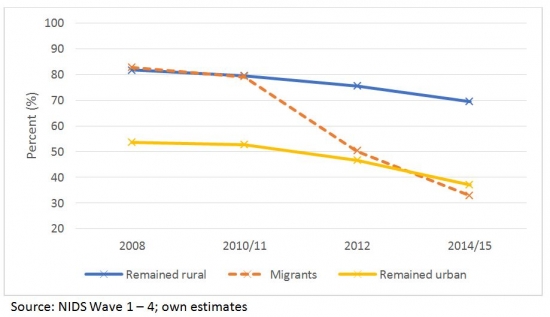 In other words, rural migrants started off mostly poor, but ended up as urban and largely non-poor. Two-thirds of migrants who were poor in 2008 managed to exit poverty by 2014, adding up to approximately 385 000 people nationwide. In contrast, only 20% of individuals who stayed in their rural communities achieved the same escape from poverty.

Importantly, this drop in poverty levels did not come about because migrants simply attached themselves to better-resourced urban households. Rather, the evidence shows that migrants were successful in finding some kind of job, even if it was casual and low paid. A total of 330 000 people moved into employment after migrating to an urban area. This meant that the expanded rate of unemployment for this group fell dramatically over the period: from 50% to almost 15%, with nearly 80% of previously unemployed migrants’ managing to find work in the urban area. Half of these were previously unemployed and half were not economically active.

It is difficult to disentangle the mixture of factors and forces that determine the success or failure of somebody’s relocation to the city. Still, the evidence suggests that migration is statistically significant in lifting many people out of income poverty, despite the other hardships they may face in the city. These findings are supported by another recent study of social mobility, which found that migration to urban areas was one of the biggest triggers that moved people into the middle class among a number of events which include gaining access to social grants or higher household employment (Schotte et al. 2017). Studies in other countries also support a strong relationship between migration and rising incomes (Kundu & Sarangi 2007; Su et al. 2015; Ingelaere et al. 2018).

A costly dual existence for many: part rural, part urban

Whilst the poverty-reducing benefits of moving to the city are clear, the historical rural-urban divide implies some complications in South Africa.

A peculiar characteristic of migration here is that many people appear to live a dual life. They maintain a foot in both rural and urban areas, whether physically, emotionally or financially (Posel & Marx 2013). Apartheid’s denial of black people’s right to residency within urban settlements set in motion a circular process of movement between town and countryside. Our own estimates from the NIDS data indeed show countervailing flows of people from urban to rural areas, particularly during the economic downturn around 2008. Recent estimates suggest that in 15% of African rural households an adult member is absent for at least one month a year to look for work (Posel, forthcoming).

The dual existence may have several consequences that are harmful to both urban and rural communities. For example:

These aspects suggest that the benefits of current forms of migration are not clear cut for the families concerned. Further research is needed to understand the legacy and trajectory of migrant labour after apartheid – and how current patterns affect both the sending and receiving areas, and both the individual migrant and their household members.

For many years government policy has been ambivalent about rural-urban migration, partly because of social dislocation in the sending regions, and pressures on land, housing and public services in the cities. Attitudes have often been based on fear: of over-burdened local services, job displacement by outsiders and higher crime.

Municipal by-laws, land-use zoning systems and investments in public infrastructure can all be used as instruments of inclusion or exclusion for outsiders. Where city authorities fail to – or are unable to – provide serviced land for incoming populations, the result is intensely crowded informal settlements and backyard shacks. Such stresses and strains lie behind the recent spate of unauthorised land occupations across the major cities and the associated concerns about social and political instability.

On its own, government is unable to deliver on its promise of decent, well-located housing for all. Private-public partnerships that leverage additional capital and technical expertise to expand accommodation and infrastructure are potent tools for building inclusive, well-functioning cities.

As entry points for migrants and places of suffering and high risk, shack settlements are critical arenas for policy attention. Government needs to renew its commitment to work with communities to upgrade housing and improve basic services. There is no justification for citizens who live in more or less permanent settlements having to endure squalid living conditions more than two decades after 1994.

Government also needs to go beyond reacting to the problems in informal settlements by becoming better equipped for future urbanisation. It needs to prepare the ground in advance to accommodate migrants and integrate them into the physical and social fabric of the city. Investing in people and places is key to realising the potential of liveable and prosperous cities.

Glaeser E (2011) Triumph of the city: How our greatest invention makes us richer, smarter, greener, healthier, and happier. London: Penguin

Turok I & McGranahan G (2013) Urbanization and economic growth: the arguments and evidence for Africa and Asia. Environment and Urbanization 25(2), 465-482.

Visagie J & Turok I (forthcoming) Rural-urban migration as a means of getting ahead. Draft book manuscript. https://www.researchgate.net/publication/321159397_Rural-Urban_Migration_as_a_Means_of_Getting_Ahead

[1] NIDS is a longitudinal survey that tracks the incomes and movements of 30 000 individuals every two years.

[2] Migrants are defined as adults (aged 19 – 56 years in wave 1) who were rural in the first wave and moved to an urban area in any of the subsequent waves (and did not move back to a rural area).

[3] We employ an upper-bound poverty line of R1 140 per capita in December 2012 prices, based upon a basic-cost-of-needs approach as developed by Budlender et al. (2015).