Have real wages fallen behind or increased out of line with productivity? A macroeconomic perspective

Reads 10,240
Philippe Burger, 20 January 2016
Macroeconomic data on wages and productivity suggest that there has not been any constant tendency for real wages either to fall behind or increase out of line with increases in productivity. Upward shifts have affected real wages sporadically, but have subsequently been offset by downward shifts, leaving a one-to-one long-run relationship between real wages and productivity. This is contrary to the conventional wisdom in both the labour union and business worlds.

In what has almost become an annual South African ritual since 1994, labour unions make double-digit wage demands during wage negotiations, typically in a single-digit inflationary climate. Employers then insist that wages cannot increase by more than the rate of inflation plus productivity growth – for doing so would decrease international competitiveness and thus increase unemployment. What has been the outcome of this ritual? Have real wages increased significantly over time, relative to productivity? Or have they actually fallen behind?

These are the questions being considered in this article which covers the period from 1982 to 2015.[1] The sample period is long enough to include the formation of Cosatu in 1985 and  the major changes to the labour relations system as well as the opening up of the economy to international competition after 1994.

Untangling the relationship between wages and productivity

The first matter to be analysed and considered is whether real wages have increased continuously or whether there have been sporadic upward shifts relative to productivity over a selected period. This is relevant because sporadic shifts might indicate the impact of instances of where there have been significant increases in labour bargaining power.

For instance, the boost to labour unions’ ‘muscle’ when Cosatu was formed in 1985, or when new labour legislation was enacted after 1994, could have pushed real wages significantly higher than any productivity trend. Alternatively, when the economy was exposed to full international competition in 1994, instead of increasing, real wages could have decreased relative to productivity as firms cut wages to improve competitiveness. If so, such cuts might reflect labour’s weak or weakening bargaining power. If such cuts did not occur, it could indicate that labour unions actually prevented real wages from being cut, relative to productivity.

In another scenario, firms may have offset or counteracted ‘excessive’ real-wage agreements by lowering wages at a later stage. For instance, if increases in real wages relative to productivity occurred as a result of the unions’ behaviour or labour legislation, firms might have found ways to reduce the total cost of wages at a later stage, thereby pushing the average real wages down relative to productivity. (An example of such measures is the implementation of labour-saving capital-augmenting technology).

The size and impact of labour unions increased markedly in the 1980s, following the labour market reforms recommended by the Wiehahn Commission in 1979 (SA History Online 2016). Cosatu, the largest labour union federation in South Africa, was founded in 1985. By 2015, the total membership of labour unions in was approximately 3.7 million workers, which amounts to 33.8% of the workers in the formal, non-agricultural sectors (based on data from QLFS Q3 2015). Union membership is significantly skewed in favour of public sector unions: in 2013, for example, 69.2% of the workers in the public sector belonged to a union, compared to only 24.4% of workers in the private sector (Bhorat, Naidoo & Yu 2014). This might indicate that labour has relatively less power in the private sector.

In terms of the Basic Conditions of Employment Act of 1997 (as amended in 2002), the Minister of Labour sets minimum wages in South Africa for 11 sectors through the so-called Sectoral Determinations. Some of the workers covered are farm workers, domestic workers, workers in the hospitality industry, taxi workers and forestry workers. Bhorat, Kanbur and Mayet (2012) estimate that, in 2007, these sectoral determinations covered 17.2% of workers (excluding agricultural workers).

The relationship between real wages and productivity – some macroeconomic evidence

If unions, bargaining councils and the setting of minimum-wages have a significantly positive impact on real wages relative to productivity, then one would expect real wages to:

The converse would apply if firms succeeded in reducing real wages relative to productivity.

To analyse this, I considered indices of the aggregate average real wage and the total productivity in the economy, with the first quarter (Q1) of 1982 set equal to 100 for both indices. The average real wage was calculated using wage data from the various labour surveys of StatsSA, while the average productivity was calculated as aggregate gross value added (GVA) divided by the number of workers. As noted above, the period of analysis was selected to include the formation of Cosatu in 1985 and the later changes in the labour relations system, as well as the opening up of the economy to international trade after 1994. 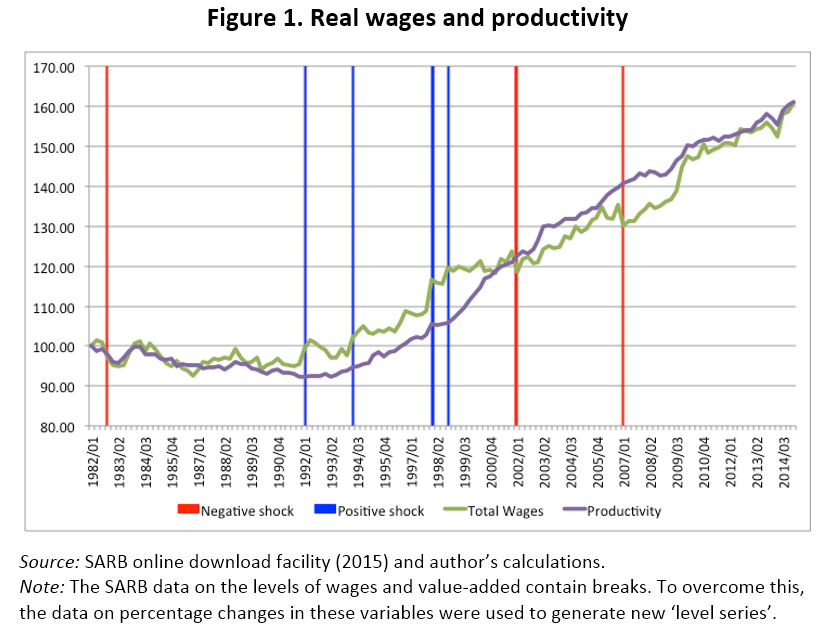 It was noted above that the impacts of different factors need to be untangled in order to understand the relative behaviour of real wages and productivity. A more formal statistical analysis enables such untangling to some extent. To estimate the short- and long-run relationship between real wage and productivity, I used an econometric time-series model that also allows for one-off shifts in the relationship to occur. Thus, the method of analysis is flexible enough to deal with structural changes during the period. (The shifts are not imposed, but rather estimated.[2])

A first step is to analyse the direct long-run, or underlying, relationship between real wages and productivity by taking other factors and shocks out of consideration. The analysis shows that over the full period (1982 Q1 to 2015 Q1) there is a one-to-one relationship between real wages and productivity: on average, a 1% increase in productivity has been associated with a 1% increase in real wages. This means that average real wages have changed, on average, completely in line with changes in per-worker productivity. (This outcome is what standard economic theory would predict for labour markets that are functioning fairly well.)

The macroeconomic analysis does not divulge the precise causes of the shifts, but one can reflect on particular events that may have caused them. The shifts of the 1990s may have been due to stronger unions or the implementation of stronger labour laws. For instance, the transition to democracy in the early and mid-1990s also saw the political ascent of the ANC-SACP-Cosatu tripartite alliance and hence a strengthening of labour power. Also, the real-wage upward shocks of 1998 occurred in the year after the implementation of the Basic Conditions of Employment Act. However, their effects were short-lived and mostly offset in the 2000s, when the country faced stronger foreign competition. For instance, the rand appreciated in 2002/3, 2007 and 2009; this might have served as an incentive for firms to become more competitive by curbing labour cost – particularly in 2002 and 2007, when international demand was still strong and firms could benefit from improved competitiveness. Also note that there was no large-scale downward adjustment in real wages following the substantial opening-up of the economy in the mid-1990s to foreign competition. Labour unions might have been too strong for firms to improve international competitiveness through lowering real wages.[3]

All in all, there does not appear to have been any continuous tendency for real wages to diverge from productivity – either by falling behind or by increasing out of line with productivity increases. This is contrary to the ‘conventional wisdom’ in both the labour union and business worlds. Upward and negative shifts (shocks) have affected real wages sporadically, but these have tended to cancel each other out over time.

[1] This article is based on my presentation at the IMF-ITUC Conference in Washington DC on 15 December 2015.

[2] The model is an ARDL Error-Correction formulation using GETS modelling with IIS dummies to deal with the shifts (p-values of final model were all statistically significant at 1% level):

[3] It is doubtful whether such strategies would have been politically feasible, given the extent to which firms would have had to cut wages. Wages in South Africa were up to five times those in China and India, three times those in Mexico and Malaysia and higher than those in Russia, Brazil and Turkey (National Planning Commission 2011).