Reads 4,217
Mahlatse Mabeba, 23 June 2021
Financial inclusion has become an important measure of inclusive economic growth in South Africa, as well as in other parts of the world. But if inclusion cannot be measured accurately it leaves policymakers and market participants making inadequately informed decisions. This article discusses a new quantitative method to construct financial inclusion indices for the nine provinces. The index trends are used to evaluate the state of financial inclusion in the recent past and to make recommendations for further financial sector development policy. The country has made improvements in financial inclusion since 1994. Since then, there has been increased access and usage of financial services. However, between 2015 and 2018 there was an overall reduction in financial services. The decline has been heavily influenced by economic shocks such as decreasing income in various provinces, a decrease in credit extension to the private sector, rising unemployment rate, and rising risks to financial infrastructure. In fact, financial inclusion in 2018 fell back to the level it was in 2014 after a decline that began in 2016. Financial inclusion has increased in Gauteng, Western Cape, and the Eastern Cape; however the Free-State and Northern Cape have experienced declines to below their 2015 level, while the other provinces experienced minor declines.

Past measurements of financial inclusion models have not produced the detailed results that policymakers may find useful.[1] There was thus a need for research of a more quantitative nature to measure the status of financial inclusion. Past research has used surveys to measure inclusion, but the method has not been precise.[2] This research, on the other hand, constructs a quantitative index and includes two dimensions from the financial sector. The dimensions included four variables associated with data available from formal financial institutions. The variables are adjusted for geographical penetration indicators to account for the scale in which banks provide their products and services.[3] Hence bank ATMs, branches, deposits, and borrowing data by people above the age of 15 are the focal variables that make up the indices that are then aggregated into a composite index.

There is consensus between industry, researchers, and community organizations that dynamic access and usage of financial services promotes sustainable local economic growth, employment, general well-being, and financial stability.[6] Until now measurements of financial inclusion have been limited and have provided a view at a national level only. The data have been collected from Statistics South Africa (StatsSA) and the South African Reserve Bank (SARB).

Making financial services available to the excluded portion of the population mitigates poverty, improves financial wellbeing, reduces barriers to finance, and enables access to credit and to savings for unforeseen circumstances. An inclusive financial environment can facilitate financial development and reduce income inequality. Access to financial products and services has a positive impact on consumption smoothing – balancing spending between today’s needs and saving for the future. The financially included are better at making consumption, saving and investment decisions than those who are excluded. They are also more resilient to socio-economic shocks.

South Africa is one of the most unequal countries in the world and regional financial inclusion indicators reflect this.

This study computed the financial inclusion index for the period 2009 to 2018. The analysis makes reference to provincial income groups, adult population, and geography. We analyze two dimensions: access and usage in all nine provinces.[7]

In the sample period, as population size grew so did the number of ATMs in Gauteng, Western Cape, Eastern Cape, Limpopo, and Mpumalanga. The other provinces, with lower populations, have a lower ATM concentration.

Targeting provinces that contribute a lower percentage to the national GDP with financial services may reduce the divergence between low- and high-income provinces. A good case is that of the Free State, which ranks third in ATMs but eighth in GDP contributions out of nine provinces. Figure 1 shows the provincial ranking with respect to access to ATMs as an average of the indices from 2009-2018. 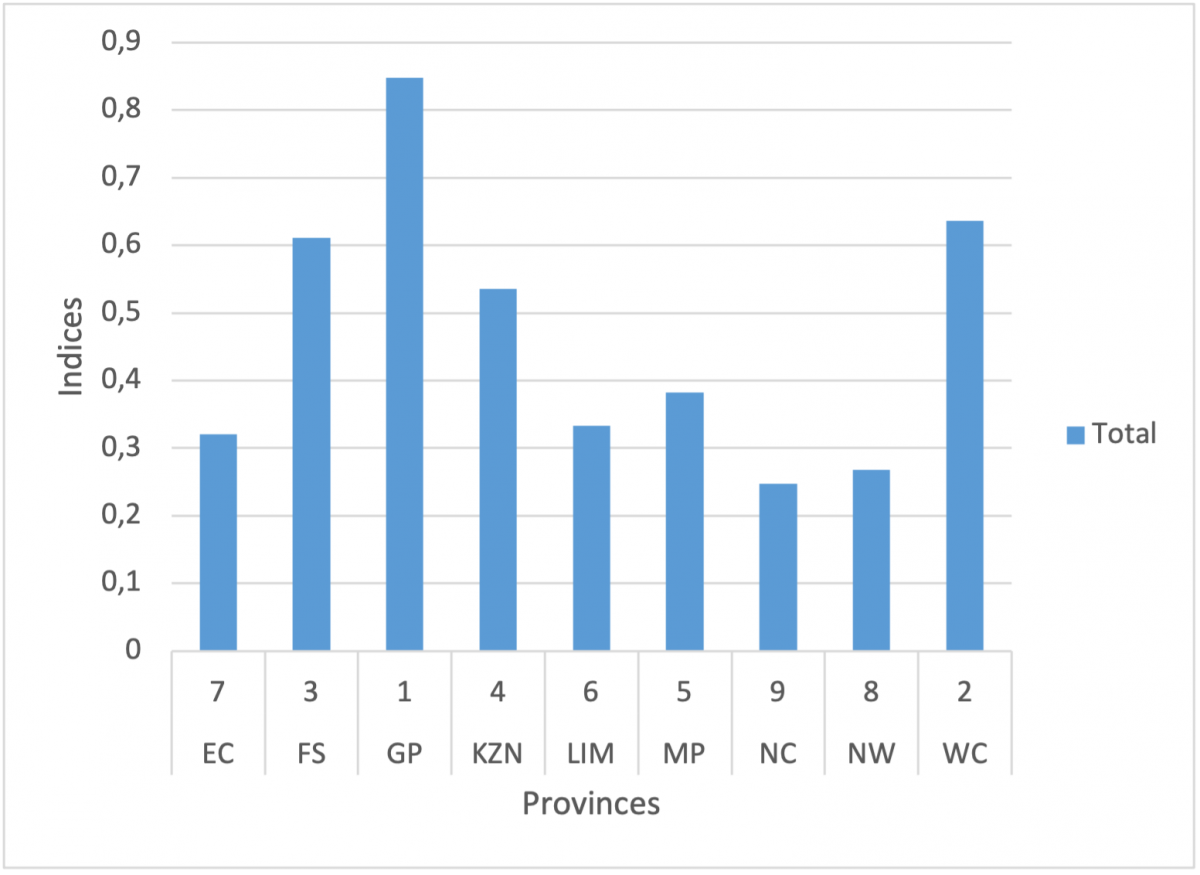 High-income provinces tend to offer better financial services. Figure 2 shows the provincial ranking with respect to access to financial institutions’ branches as an average of indices from 2009-2018. 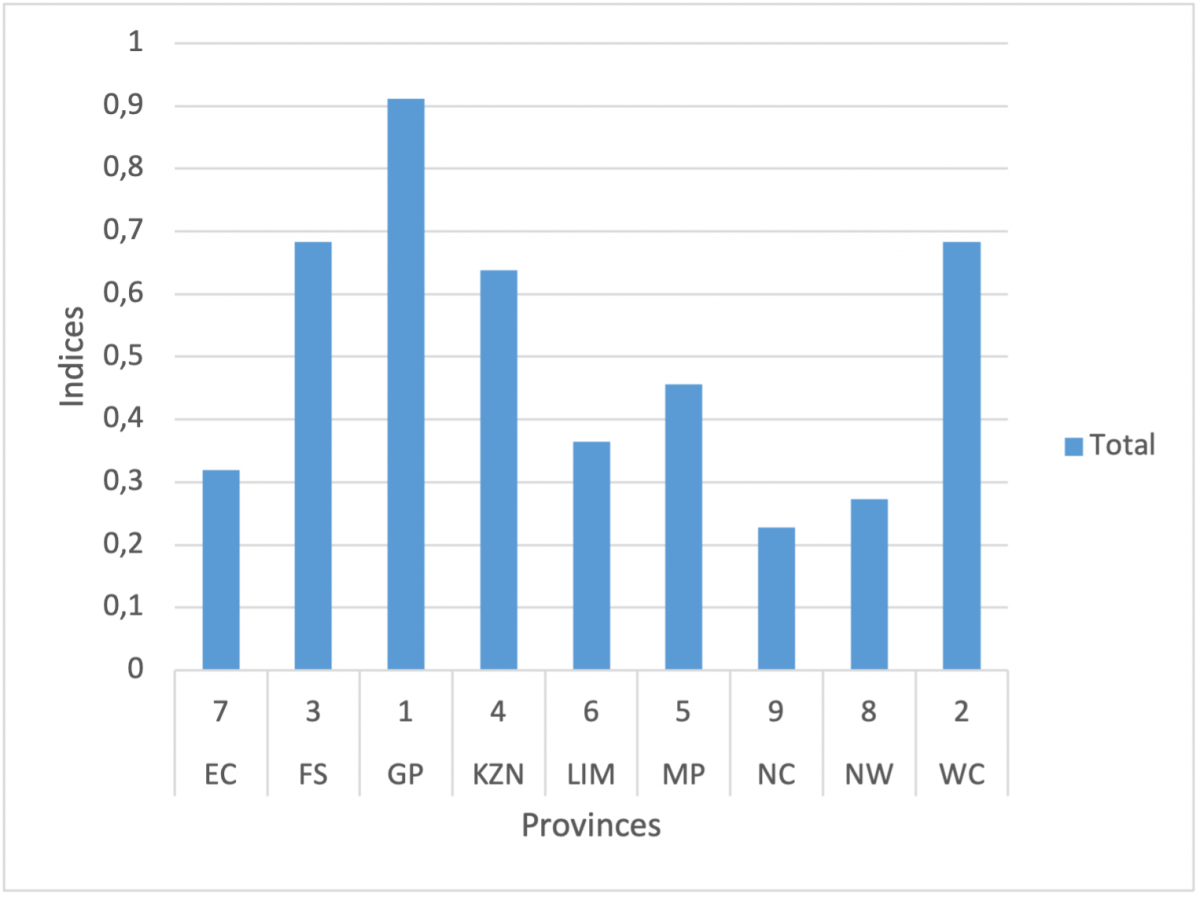 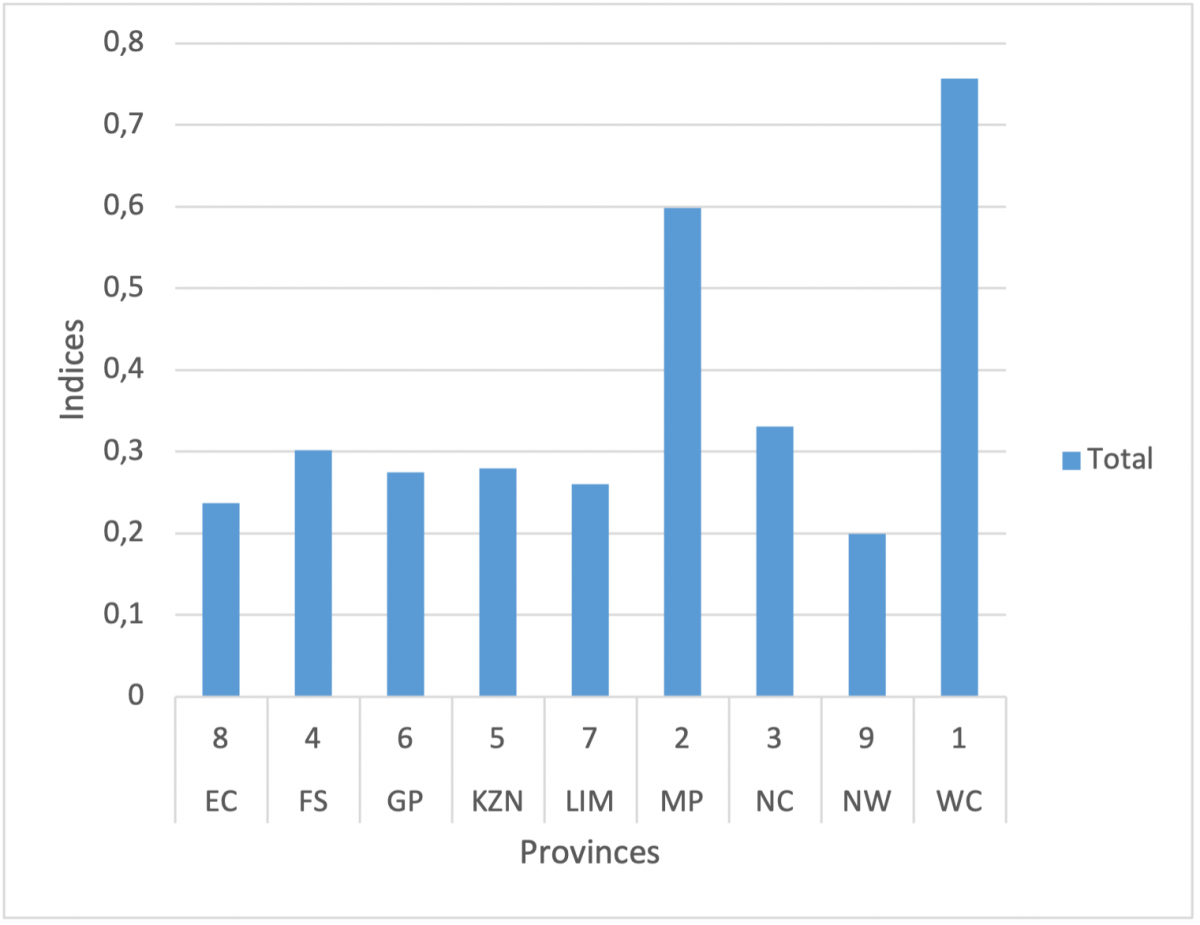 The borrowing behaviour at financial institutions is polarized as high-income and densely populated provinces possess a high level of credit extension. The rate of borrowing is correlated with the access variables of ATMs and branches. Gauteng, the largest economic hub of South Africa, has a dominant position in credit extension. Free-State is a lower-income province but ranks second in borrowing. This is an indicator that individuals in this province could be heavily indebted. Figure 4 shows the provincial ranking with respect to borrowing activities at financial institutions as an average of indices from 2009-2018. 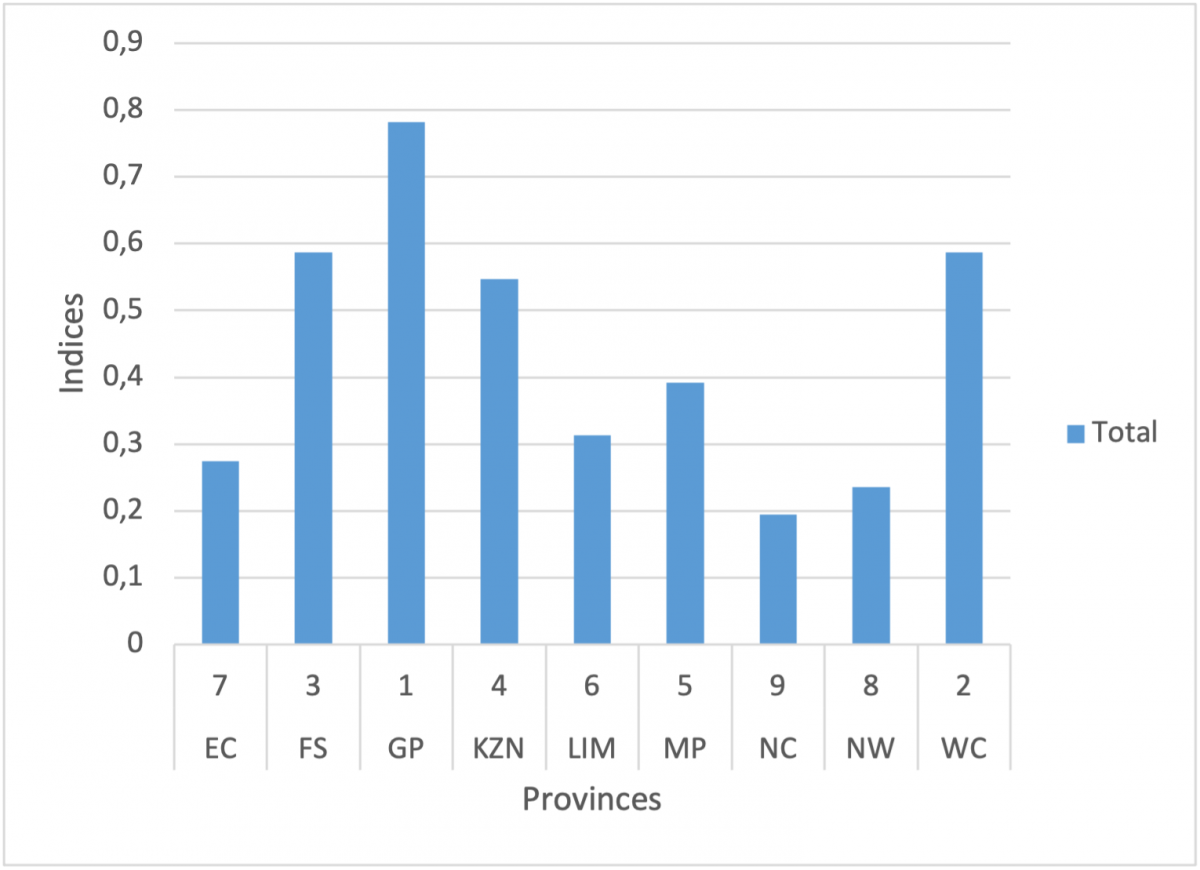 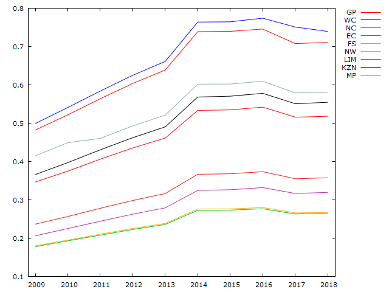 Provinces that have fallen in their ranking since 2009 are the Free State and the Northern Cape. Gauteng, Western Cape, and the Eastern Cape have risen. Limpopo, KwaZulu-Natal, North-West, and Mpumalanga were stagnant. The level of financial inclusion increased steadily in all provinces between 2009 and 2014 and then started falling gradually till 2018. The financial inclusion index for 2018 is lower than the index of 2014, showing there has been a decrease every year in these four years. Between 2013 and 2015, GDP fell sharply and economic growth rates remained below one percent until 2018. Since provincial GDP levels are associated with the volume capacity of ATMs, branches, and borrowers, which dominates the weight of composite index, it indicates that economic activity affects financial inclusion. Figure 5 shows the financial inclusion composite index trends for the nine provinces of South Africa from 2009-2018. Table 1 below shows the overall ranking of the provinces.

It is important to understand the association that composite indicators have with economic performance and policies. This is the first time a quantitative financial inclusion measure is being made available at a provincial level in South Africa. This financial inclusion index can be used to guide policymakers to create an enabling environment for financial institutions to reach individuals and create innovative financial products. An enabling environment for financial inclusion should mean lowering costs of financial services, reducing poverty, investing in public and private financial infrastructure, and enhancing financial literacy programs. Private and public-sector partnerships can focus on developing the financial infrastructure of lower- and middle-income provinces. In addition, policymakers have the ability to collect regional demand-side quantitative data for official statistics.

The key goal of this study is to produce the first quantitative measure of financial inclusion for regional South Africa. The constructed composite indicator shows that financial inclusion has increased steadily since 2009. However, barriers to the financial markets are still prevalent. Those excluded, especially the poor, are becoming more marginalized. The digital divide is a major problem worsening financial exclusion. Even people who can afford to access and make use of financial products and services, do so at high cost. Building financial capacity in all provinces is important to promote inclusive economic growth.