Reads 15,372
Philippe Burger, 17 February 2015
The share of labour in aggregate income in South Africa has declined significantly since 1993, while that of capital has increased. Concurrently, real wages have increased slower than productivity. This article argues that financialisation and the more aggressive returns-oriented investment strategies applied by large, global investment institutions have translated into investors requiring higher rates of return on capital. This, in turn, has led to the increased adoption of capital-augmenting, labour-saving technology that has reduced labour’s share of total income – with important consequences for income distribution.

In South Africa labour’s share of aggregate (non-agricultural) income – which comprises labour and capital income – has fallen significantly since 1993: from 57% in 1993 to 53% in 2013. When the ailing manufacturing sector is excluded from the data, the fall is even more dramatic: from roughly 57% to just below 50% (see the previous Econ3x3 article for more on this trend.) The falling labour share of total income and the concomitant rising share of capital contribute to a deterioration of income inequality which, given the already high levels of inequality, may hold rather uncomfortable political consequences in future.

Various contributors (ILO 2013; OECD 2012) suggest that the increasing capital share and the concomitant decreasing labour share of total income have been caused, inter alia, by technological change. The last three decades have seen large and significant changes in information technology in particular. These changes have increased the productivity of physical capital relative to that of labour (e.g. consider how ATMs, online banking and online shopping have increased the productivity of capital, while they have left the productivity of human bank tellers and shop assistants apparently unchanged or reduced). As a result, wages have become stagnant or have grown slowly, causing a decrease in labour’s income share. The OECD (2012:110) concludes that, in OECD countries, about 80% of the drop in labour’s share over several decades can be ascribed to technological change that has caused companies to substitute ‘high tech’ physical capital for labour.

The ILO (2013:49) highlights the role of financialisation and the increasing role of aggressive returns-oriented investment institutions that pursue higher returns. According to the ILO (2013:51-3) financialisation, followed by globalisation, is the largest contributor to labour’s falling income share in both developed and developing countries (with technology playing a smaller role).

The question is whether technology, financialisation and globalisation can also explain labour’s declining income share in South Africa. The answer is a complex one.

Given that labour’s share in South Africa has decreased, it appears that the increased use of capital-augmenting, labour-saving technology is a likely explanation. The next question concerns why firms have implemented such technology.

The bargaining power of labour and capital: have globalisation and financialisation contributed to labour’s falling share?

According to Rodrik (1999), because labour has a better bargaining position in democracies than under authoritarian regimes, wages in democracies are usually up to 50% higher than in non-democracies – therefore labour should have a higher share of aggregate income. Rodrik also cites evidence from countries that shows that wages often grow faster than productivity during a time of political transition (1999:722, 725). As the discussion below will show, this has not been the case in South Africa.

Rodrik argues that, apart from labour productivity, three factors determine wages (1999:727). The first factor is labour’s relative bargaining strength (inter alia, through unions). The second factor is labour’s ‘outside income options’, i.e. options outside the private sector in, for instance, public sector employment or the informal sector. Both of these options affect the lowest wage for which workers are willing to work. The third factor is capital’s outside income options, i.e. investing in another country.

Political participation and political competition strengthen labour’s bargaining position and therefore could explain why income has shifted from capital to labour. However, capital also can exert ‘bargaining power’ in the wage-setting process, although not always in an organised way. This bargaining position depends on the outside options of the owners of capital. Should the return on outside (offshore) investment options increase, the incentives faced by foreign and local firms move in favour of investing offshore rather than locally. Unless local cost (including labour cost) is curbed, firms will neither invest nor employ people locally. The resultant curbing of labour cost subsequently puts downward pressure on the share of income allocated to labour.

Globalisation and financialisation (highlighted by the ILO) provide the context in which this can occur. Financialisation is associated with an increased role of aggressive, returns-oriented investor institutions; this points to stronger outside options for capital. If financial investors perceive good outside income options (i.e. higher rates of return offshore), they will require a higher rate of return on domestic investment. Simultaneously this also means that, at any given rate of return, financial investors will supply less investable funds locally than before.[2] With investment being the change in the level of capital, less investable funds put downward pressure on capital-output ratios. Together the higher required rate of return and lower supply of investable funds put pressure on firms to deliver such higher returns, in pursuit of which firms typically implement capital-augmenting labour-saving technology that causes a decline in labour’s income share.

As Reserve Bank data in figure 1 shows, the capital-output ratio and labour’s share in South Africa appear to be positively correlated. 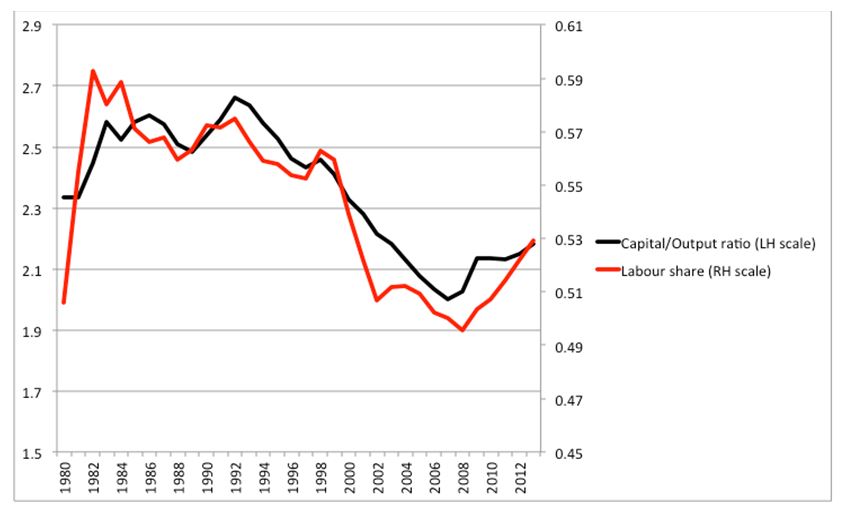 This seems to corroborate the presence in South Africa of the sequence of events described above. It suggests that it is the demand for a higher rate of return by financial investors that (via a lower capital-output ratio) has placed pressure on firms to implement the capital-augmenting labour-saving technology, which, in turn, has caused labour’s income share to decline. Globalisation and financialisation seem to have provided the ideal environment for this to occur.

The other side of the coin: wages are not keeping up with labour productivity 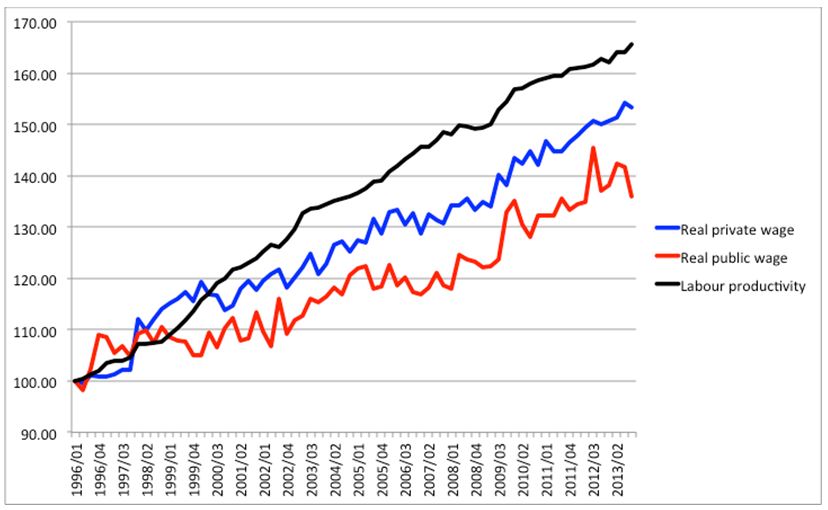 This implies that, when South African firms implement capital-augmenting labour-saving technology, wages will not keep up with average productivity in a one-to-one relationship – indeed, wage growth will fall short of productivity growth and a growing share of the output per worker will go to capital. This is what happened in the past two decades.

The analysis suggests that the increased use of labour-saving technology and higher levels of globalisation and financialisation all appear to have contributed to a weakening of labour’s bargaining power since 1994, contributing to a declining share of labour in total income. As an integral part of this dynamic, the owners of capital appear to have been successful in exerting ‘bargaining power’: when firms are under competitive pressure from investors to improve profitability, they tend to implement capital-augmenting labour-saving technology which ensures that capital captures a larger share of income (capital and labour then being substitutes).

Because capital income is more concentrated than labour income, a falling labour share contributes to a deteriorating income distribution. From the point of view of policy, the question would be whether and how the decrease in labour’s share can be arrested – and how it would affect economic growth. Measures that redistribute income from capital to labour might arrest the decline – but if they are designed and implemented without care, they may undermine economic growth. However, recent studies published by the IMF (Ostry, Berg & Tsangarides 2014) and studies by other researchers[3] indicate that redistributive measures such as minimum wages, welfare benefits that encourage human capital creation, and more progressive income taxes do not necessarily undermine economic growth (also see Donaldson, Econ3x3, 7 October and 12 November 2014). Thus, these measures deserve attention as possible ways in which to arrest the falling labour share.

Changing the fundamental relationships that produce the declining share of labour in income will not be easy. For labour’s share not to decrease when capital-augmenting technology is implemented, capital and labour would have to be complements, not substitutes. Alternatively, firms need to implement labour-augmenting technology. In both cases there will be a need for specific types of labour skills that complement the new technology.

However, as noted above, given the role of large, aggressive and returns-oriented global investment institutions that focus on (often quarterly) returns, firms will continue to face pressure to produce higher rates of return at any cost. Thus, the problem is not merely one of training workers to complement capital. The deeper issue is what constitutes a socially fair rate of return on capital that still compensates owners of capital sufficiently for the risk that they bear. This is probably the most difficult question to resolve from an ideological point of view.

What complicates these questions is that finding and implementing their answers are not just an intellectual exercise. As Rodrik (1999) shows, it is tied up with existing national and global institutional arrangements that define the bargaining power of labour and capital. A resolution would require a broader public debate and, indeed, a (sufficient) public consensus on the contents of our country’s social contract; at present that contract seems incomplete. Whether the domestic and, especially, global institutional arrangements will allow space for such a social contract to be agreed upon and acted upon, is an open question.

[1] This article is based on Burger (2014), Presidential Address at the Economic Society of South Africa.

[3] For example, Trubek, Coutinho and Schapiro (2013)present a study of Brazil, while Bernard & Boucher (2007) offer a comparison of OECD countries with various welfare and redistribution systems.