Reads 32,966
Ihsaan Bassier, Ingrid Woolard, 12 September 2018
We use tax data (which include accurate data for the very rich) to investigate the patterns of income growth over the period 2003 to 2016. Despite the need for inclusive economic growth in the light of extreme inequality, the top 5% of incomes grew at about 5% per year compared to national income growth of 3.7% per year. This divergence is striking in the post-recession period and appears to be partially driven by high growth in income from capital.

The work of Thomas Piketty (2013) and others has highlighted the alarming increase in the income share of the richest 1% of people in countries ranging from the USA to India. Policymakers in South Africa have long sought to promote ‘inclusive growth’ to address unemployment, economic inequality, poverty and economic exclusion. This article reports new findings on income inequality, in particular the incomes of those at the very top of the income distribution – something not possible before (see Bassier & Woolard 2018).

Regarding research on the highest incomes, Milanovic (2014) notes that ‘[h]ousehold surveys, which for decades were the bread-and-butter of economists working on inequality … were shown wanting as they failed to fully capture this new phenomenon: the ineluctable rise of the top… and the stagnation of everybody else’. South Africa is no exception. Despite ample empirical evidence that South Africa has one of the most unequal income distributions in the world, the conventional use of household survey data – such as StatsSA’s Living Conditions Survey, or the NIDS (the National Income Dynamics Study, collected by SALDRU on behalf of the Department of Planning, Monitoring & Evaluation) – provide an incomplete picture of the incomes of the top groups of income earners. This is for three reasons. One: being very rich is rare, so sample surveys will not necessarily select the very rich. Two: the very rich are less likely than others to participate in household surveys. Three: the very rich may be reticent to reveal the true extent of their incomes.

Tax information captures reported earnings and all kinds of income of taxpayers up to the highest level much more accurately. Therefore, tax data provide a much better view of the distribution of income at higher levels of income in particular (for more detail on the data, see Bassier & Woolard 2018). In addition to publicly-available annual tax tables released by SARS, we use confidential, anonymised, assessed tax records to estimate the level and growth of the incomes of the richest in South Africa. These records were made available on a confidential basis to selected researchers in the REDI3x3 project.

Here we do not consider the Gini coefficient, which is a measure of inequality in the overall income distribution. Rather, we focus on income shares in order to show the relative position of the top end of the income distribution. All calculations are in terms of real income in 2016, i.e. adjusted for inflation.

Top incomes have diverged from the rest . . .

Table 1 shows, first, how the top portions of the adult population in 2016, about 35 million people, are distributed in terms of their taxable incomes. The 95th percentile indicates the income level at which the top 5% highest-income individuals begins and their cumulative share of Gross National Income (GNI).[1] For example, row 1 shows that, at annual incomes of about R300 000 and higher, the top 5% of individuals earned 27.4% of GNI.

If, for example, one cuts this down to the top 1%, who have incomes of about R780 000 and higher, we see that their share of GNI is 12.6%. The richest 0.01% of people (about 3 500 people) had an annual income of over R7 million each; their combined share of GNI was 1.2%, which is over a hundred times their share of the population. The relatively large income shares of such small percentages of the total adult population captures, in stark terms, the extent of income inequality.

A second issue concerns how this inequality has changed in the past decade or so. The annual income growth rates for the entire period from 2003 to 2016 are shown in the last column of Table 1. For all the top percentiles the growth rate of income was around 5% per year. In comparison, the annual growth rate of Gross National Income for the same period was about 3.7%. Thus the top income groups’ income growth was significantly higher than the national average.

… notably in a recent period of low economic growth

Figure 1 shows the cross-sectional growth rates of the income of people at each percentile for these periods. The blue line shows the average growth rate of national income (GNI) in each period. The left-hand graph shows that growth for the 95–98th percentiles was similar to the average national growth of 5.7% (blue line) in the high-growth upswing before the recession of 2008–09, but that the incomes of the very richest grew much faster. After the recession, when the economy (as measured by GNI) was growing much more slowly at an average of 1.9%, the incomes of the top earners grew more than twice as much as the GNI rate of growth. 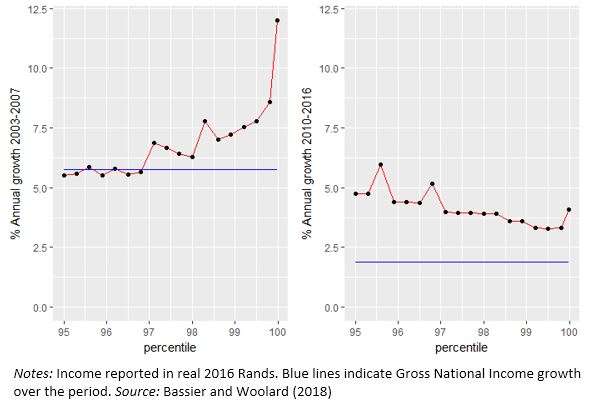 How does the income growth of the top earners compare with that of the rest of the people?

We use StatsSA’s quarterly labour-force survey (QLFS) data from the Post-Apartheid Labour Market Series (2017) to estimate the income growth rates for the rest of the adult population. (We cannot use tax data for the entire distribution since only individuals above the filing threshold of R350 000 are obliged to submit a tax return.) Figure 2 shows a combined graph with growth rates from both survey and tax data, for the period 2003-2015. The solid line shows the average growth rate of GNI over the period. About 60% of adults have remained on zero labour-market income. The lowest incomes grew substantially, driven by gains off a low base. For example, the 60th percentile earned about R400 per month in 2003, followed by growth at an annual rate of 6%. The bulk of incomes across the distribution saw change of between 1% and 2% only – compared to the top end of the distribution which have income growth rates of about 5%, as noted above.

As a result, over the 12 years, the median income from working in the labour market grew by only 20% while the top 1% of income doubled.[2] This seems to indicate that economic growth in South Africa in the period 2003–2015 has not been inclusive (also see Fourie 2014 on Econ3x3). 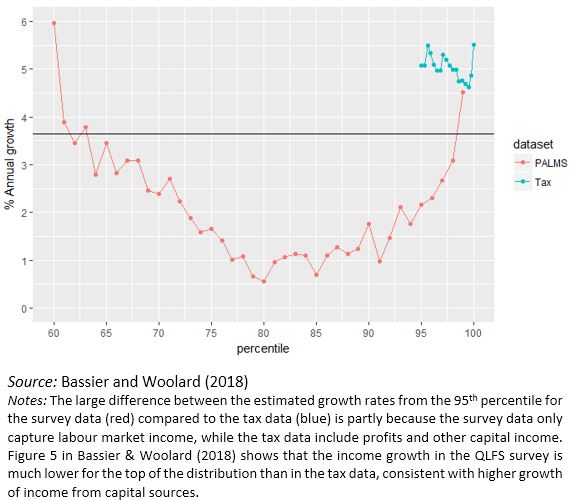 Who are the winners and losers of this growth pattern? First, the survey data show that those with the lowest income growth (at the bottom of the U-shape), i.e. the 75th to 90th percentiles, were earning between R3 350 and R10 800 per month in 2014. Secondly, whites are significantly over-represented in the fast-growing top percentiles, making up 43% of the richest 5% of adults compared to 8% of the full population.

Using confidential tax data from SARS, we can uncover the composition of the top incomes. Figure 3 shows the average amounts from income sources by percentile in 2014.

Figure 3: Sources of income by percentile in 2014 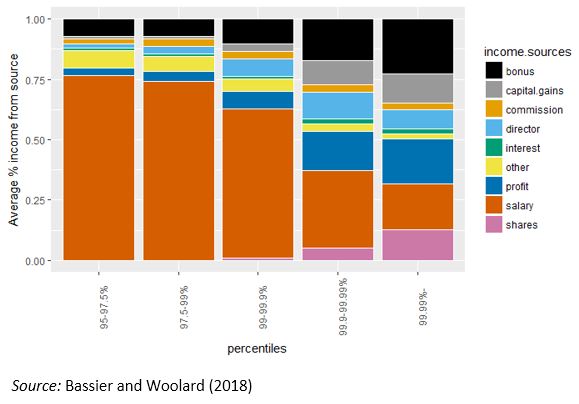 To what extent is top income growth due to the newly rich?

The tax data analysed so far covers the incomes of all taxpayers in each tax year. This group changes over time as new income earners start paying tax and others stop (e.g. due to death). Thus the data do not show how the income of particular individuals grew. However, the public tax tables from SARS provide some information on a selected panel of the same taxpayers over time that were tracked from 2005 to 2014.

Interestingly, the income of taxpayers who were already in the top 1% in 2005 grew much less than the income of all top-income taxpayers together (analysed above): the average growth rate of income over the ten years for the panel was 1.4% compared to 3.8% for all taxpayers in the top group. This may imply that the rapid income growth in the top group has primarily been driven by the growth in the incomes of new entrants (including young professionals) to the top income levels, i.e. the ‘newly rich’.

Why did top incomes grow so rapidly?

One clue is the high growth of income from capital among the top percentiles. While the economy grew by almost 4% on average per year between 2003 and 2015, income from share options grew at an astonishing 10–15% for the richest 5%. Between 2011 and 2014 alone, the tax data show that income from capital[3] grew annually by 10–20% for this group. Indeed, the Johannesburg Stock Exchange All Share Index gave average annual real returns of 9% between 2010 and 2015.[4]

However, the labour-market income of those in the top percentiles also grew faster than the GNI. Atkinson and Piketty (2010:700) note global trends which have increased the incomes at the top of the labour market. These include the increased rewards for the top percentiles that result from globalisation, skills-biased technical change, and ‘winner-take-all’ pay-off structures in which a handful of ‘superstar’ individuals reap huge rewards even if they’re only slightly better at what they do than those just below the top.

We present new evidence of alarmingly high growth in the incomes of the top percentiles –more than twice the growth rate of national income. First, this establishes that growth has not been inclusive. The gap between the stagnant middle and the prosperous top earners widened, and this continued after the 2008 recession. Secondly, the divergence appears to be partly driven by high returns to capital. This relates to Piketty’s argument that, if the ownership and use of capital are insufficiently regulated, productive labour is discouraged while rent-seeking and political instability are encouraged. Indeed, there may be a relationship between the trends recorded in this paper and the apparent occurrence of ‘state capture’ in recent years.

High growth rates of income from capital are likely to be closely related to high levels of wealth (and thus wealth inequality). We suggest that, similar to the situation in top incomes, wealth has been severely underestimated (for new research on this, see Orthofer 2016 on Econ3x3). For example, while Credit Suisse (2016) estimates there are 45 000 dollar millionaires in South Africa, back-of-the-envelope calculations suggest there may be as many as 182 000 dollar millionaires in the country.[5] The legacies and structures of the historical wealth distribution, designed under colonialism and apartheid to benefit a small white elite to the exclusion of the black majority, remain deeply relevant for South Africa’s economic growth trajectories.

Milanovic, B (2014). The return of ‘patrimonial capitalism’: Review of Thomas Piketty's Capital in the 21st century. World Bank Policy Research Working Paper No. 6974.

[2]The top 1% income includes income from sources outside the labour market, such as returns on investments. Note that, in any case, non-labour market income is negligible for the median worker.

This is an important

This is an important contribution to the debate on inequality in South Africa. I am however wondering, in the opinion of the authors, if the concept of an 'inequality trap' is an accurate way to summarise the conclusions?