Reads 5,140
Tshepo Morokong, Louw Pienaar, Wandile Sihlobo, 16 February 2021
The new African Free Continental Trade Area phases out 90% of tariffs on all goods traded between African Union member states over a 5 to 10 year period. This seeks to boost intra-African trade and investment in regional value chains. The current 41% share of SA agricultural exports that goes to Africa is concentrated in SADC. The opening of other markets presents an opportunity for further expansion in goods such as oranges, apples and wine.

The 1st of January 2021 marked the historic and much-anticipated start of trading under the newly established African Continental Free Trade Area (AfCFTA). This trade agreement, signed by 54 of the 55 African Union member states, seeks to deepen market integration on the continent, boost intra-African trade and promote regional value chains toward economic transformation through industrialisation.

As part of unlocking the agricultural sector's potential under this new agreement, market research was conducted as part of the Western Cape Department of Agriculture’s Africa Agenda research effort (Morokong & Pienaar 2019). This article highlights reasons why the African market is vital for agricultural trade as well as the main drivers of growth and opportunities for South Africa's agricultural products.

Agriculture is central to Africa's development agenda and has the potential to contribute positively to the realisation of the Sustainable Development Goals (SDGs), more especially those aimed at ending poverty, hunger and starvation. Agriculture contributes 15% to Gross Domestic Product (GDP) in sub-Saharan Africa, creates employment for more than 50% of the labour force and is a mainstay of around 33 million smallholder farms (Morokong & Troskie 2019; IFAD 2020). Moreover, agriculture's role in facilitating broader economic development in other sectors of the economy has been confirmed for many decades (Morokong & Pienaar 2019). However, to further unlock this potential, productivity growth in agricultural production, coupled with increased regional integration is essential. It will require substantial investment in rural infrastructure, agricultural research, new technologies (both biotechnology and mechanical) and extension services.

Some of the main drivers of demand for agricultural goods and increased intra-African trade include the emergence of the middle class in Africa, rapid urbanisation, and fast-changing dietary preferences that have transformed food systems (Morokong & Pienaar 2019; Johnston & Mellor 1961; Tschirley et al. 2015). The projection that 90% of world population growth is expected to come from Africa (UN 2017) and that many of these economies are amongst the fastest growing in the world suggest that the AfCFTA will translate into increased trade in agriculture and agri-processing products. Naturally, this provides opportunities for the farming sector and various agribusinesses – accompanied by increased competition due to the reduction of tariffs.

The total value of agricultural imports into Africa from the world has grown from R167 billion in 2001 to more than R1.1 trillion in 2019, representing an average annual growth of 12%. South African agricultural exports to Africa has outperformed this growth, increasing from R4.8 billion to R52.7 billion over the same period – an average growth of 14.7% per annum (Ncube & Lufumpa 2014; ITC 2020).

What are the main products imported into Africa, compared to the basket of goods already supplied by South Africa? As figure 1 shows, the top agricultural imports into Africa by value are cereals (27%), animal & vegetable fats (10%), sugar, meat and dairy all with a 6% share. The dependence on cereal reflects that Africa is not self-sufficient in producing wheat and rice – the two major imported products in this category. In contrast, South Africa's major exports to African countries were beverages (15%) (mostly water, wine and beer), followed by food preparations (9%), cereals (9%) and fruit & nuts (7%). Furthermore, South Africa is also a major supplier of sugar, dairy and animal feed (ITC 2020). 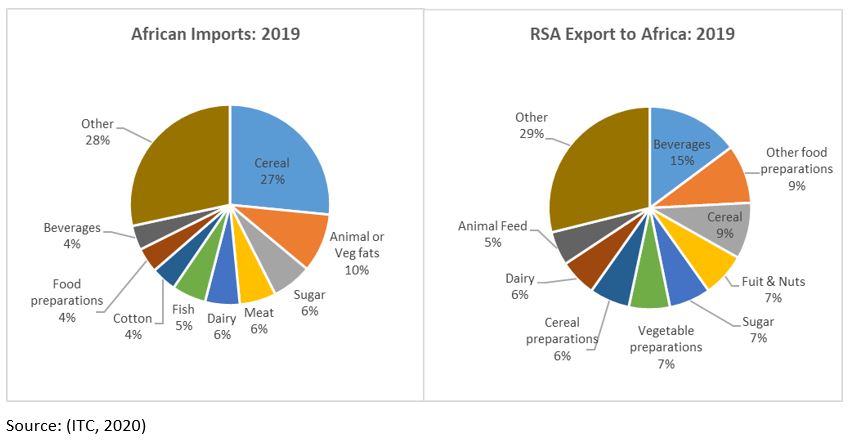 For an analysis by country, African economies were ranked according to their attractiveness for increased trade – using various economic indicators and applied tariffs before implementing AfCFTA to create a composite index. Namibia and Botswana are top of the list, followed by Nigeria, Kenya and Mauritius (Morokong & Pienaar 2019). These countries are characterised by fast-growing economies, a relative ease of doing business and established agricultural trade with South Africa. In terms of the latter, agricultural exports are boosted by existing free trade agreements such as the Southern African Customs Union (SACU) and the Southern African Development Community (SADC). The AfCFTA will open up the market for South African producers beyond these existing agreements.

What can South Africa's agricultural sector expect to benefit from being a member of the AfCFTA, especially given its relative advantage compared to our main competitors?

The AfCFTA aims to remove tariffs on 90% of all goods traded between member states in equal annual reductions toward a zero tariff. For Least Developed Countries (LDCs) this reduction is spread over ten years; for non-LDCs the reduction occurs over five years (AU & UN 2020).  For example, for Zambia (an LDC), which has a 25% customs tariff on orange imports into the country, the tariff will be reduced by 2.5% per annum, starting in 2021. A South African orange exporter to Zambia will experience a steadily declining tariff, reaching zero percent in 2030. A similar rule applies to South Africa, but being a non-LDC country, our general tariff of 4% on orange imports from AfCFTA member countries will be removed over 5 years, i.e. reduced by 0.8% per annum.

The hope is that the consensus among African nations to harmonise trading systems and promote inter-continental trade through this elimination of tariffs and other none-tariffs barriers will stimulate the investment needed to aid smooth trading on the continent.

Table 1 illustrates opportunities for South Africa by considering some major exported products from the agricultural sector. It shows the 2019 total value and share of exports that typically enter African markets, followed by the average tariff faced by current supplying countries and South Africa. Lastly, the table indicates countries that represent the largest potential benefit to South Africa due to reduced tariffs under the AfCFTA.

Table 1: RSA exports and tariffs for oranges, bottled wine and apples in Africa 2019

In terms of value, fresh oranges in general constitute the largest share agricultural export of the South African farming sector – but only 2.4% is destined for African markets. Although South Africa is still the largest exporter of oranges to Africa, we compete with Spain and Egypt, amongst others. They face an average tariff of 4.7% to enter African markets, which is much lower than the 11% currently faced by South Africa – but now set to decline due to the AfCFTA. As tariffs are removed towards 2030, markets such as Kenya, Angola and Rwanda present significant opportunities for South Africa: the current tariff margins in these markets are 25%, 50% and 25% respectively.

An important processed product is bottled wine. Of the R6.6 billion wine exports in 2019, around 18% went to Africa. South Africa already benefits from existing preferential trade agreements. As a result, the average tariff of 6.3% faced when exporting wine to existing African markets is much lower than for our direct competitors (mainly France, Spain and Portugal). The AfCFTA tariff reductions will further strengthen South Africa's position. The most significant tariff reductions will be in the Angolan, Nigerian and Ivory Coast markets.

Africa is by far the most crucial market for apple exports from South Africa, making up around 40% of the total. At the moment there is not much difference between the tariff levels faced by us and our competitors. However, while the tariff level faced by South African exporters is set to start declining soon, the average tariff of 19% faced by leading non-African exporters such as the China, Italy, USA, Chile and New-Zealand is expected to remain. Increased market access to countries like Nigeria and Senegal present enormous opportunities for South Africa to grow apple exports in the next decade. These countries are also relatively easily accessible through seaports, as some of these products from across the whole country are shipped from Cape Town.

The long wait for free trade amongst African member states is gone. The newly established AfCFTA will provide agribusinesses in Africa the opportunity for enhanced trade, cooperation and investment across borders. This progression towards liberalised markets through large tariff reductions and the removal of non-tariff barriers presents the South African agricultural and agri-processing sectors with access to previously inaccessible markets and improved ease of access to existing markets. Notably, the current 41% share of annual agricultural exports that goes to Africa is still concentrated within the SADC region, which has been a free-trade area for decades.

The opening of other markets presents South Africa with an opportunity for further expansion. It will be up to the private sector to utilise this opportunity through building partnerships and increasing investment in regional value chains to facilitate value creation on the continent. For governments, the next step is to complement private-sector efforts through investments in network infrastructure, while also addressing non-tariff barriers such as border-post inefficiencies, high transactional costs, corruption and administrative burdens.