What makes the rand so volatile: global or home-made factors?

Reads 15,621
Nasha Mavee, Axel Schimmelpfennig, 30 March 2017
Exchange-rate volatility can complicate decisions concerning trade and investment and constrain a country’s economic growth. Understanding what contributes to a currency’s volatility is an important first step in assessing whether economic policy can reduce this volatility. For South Africa, changes in global commodity prices and financial-market risk perceptions drive most of the rand’s volatility. However, local political uncertainty also emerges as a significant source of volatility. More policy and political predictability could help to smooth the rand’s volatility.

Volatility in the exchange rate — abrupt and, at times, large changes or fluctuations in exchange rates — has attracted attention in the recent literature concerning international finance and has also become headline news, particularly in emerging market economies. It has been documented that excess volatility in the exchange rate can complicate trade and investment decisions, thereby undermining a country’s economic growth. Nonetheless, diverging views have usually been put forward regarding the sources of such volatility.

How should we think about exchange-rate volatility? What are its drivers? Understanding what contributes to volatility in the foreign exchange rate can be an important first step to assessing whether the observed volatility is mostly or partially a global phenomenon, or ‘home made’ – and whether there is a role for economic policy to reduce this volatility.

These questions are the subject matter of this article. Our methodology combines a range of possible drivers of exchange-rate volatility into a series of linear regression models to assess the impact of these different variables on daily volatility of the rand since the onset of the global financial crisis. These drivers include local and international macroeconomic surprises, the volatility of the prices of South Africa’s main exported and imported commodities, the perception of risk in global financial markets, and local political uncertainty.

Since the onset of the global financial crisis, regular bouts of currency volatility have been a worldwide phenomenon, particularly for emerging-market countries, with foreign investors becoming extremely sensitive to local and international economic and non-economic developments. The South African rand, which is often viewed as one of the most volatile emerging-market currencies, has been hard hit by this phenomenon.

In figure 1, the blue line shows the not-so-smooth trajectory of the South African rand against the US dollar (in rands per US dollar, measured on a daily basis) since August 2009. The red line depicts a measure of the rand’s volatility. It is a market-based measure, called the South African Volatility Index (SAVID), published by the Johannesburg Stock Exchange. This measure shows the implied volatility of the rand/US dollar, which is essentially a forecast of the 90-day implicit volatility of the rand against the US dollar, derived from data on actual options traded. A high value for the SAVID reflects a more volatile market and, therefore, a sense of fear in the local currency market and more risk of changes in the value of the currency. Conversely, a low value indicates a less volatile market and complacency (or a lack of fear) in the markets, therefore a lower level of risk. In figure 1, periods of spikes in rand volatility are depicted by shaded bands, together with suggestions of matching political and economic events.

For example, in November 2016, the rand surpassed the Mexican peso as the world's most volatile currency. The three-month implied volatility for the rand versus the dollar rose to 19.3%, more than the peso’s 17.5%. What happened? Internationally, markets adjusted to Donald Trump’s unexpected victory in the US presidential elections. In South Africa the political outlook became affected by news that Finance Minister, Pravin Gordhan, was being summoned to testify to in court over his role in a former South African Revenue Service (SARS) official’s early retirement with full benefits in 2010. 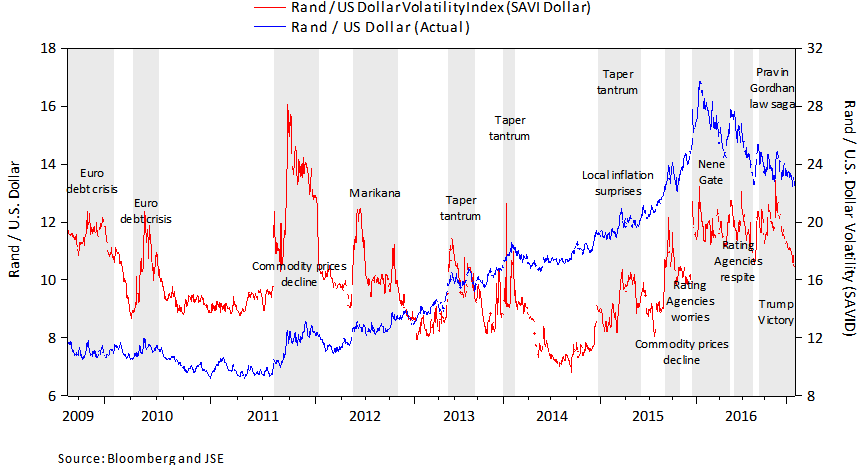 Another example occurred a year earlier, in December 2015, when the rand depreciated by 3.3% overnight — from R14.90/$ to R15.38/$ — after the unexpected announcement of the dismissal of Finance Minister Nhlanhla Nene and the appointment of a new and unknown finance minister. The depreciation was quickly reversed when President Zuma reappointed former Finance Minister Pravin Gordhan to the job, with the rand returning to R14.84/$.

In contrast, in early June 2016, the rand gained nearly 5% overnight on a combination of positive news from rating agencies, following months of negative speculation over a possible rating downgrade. Here the three-month implied volatility for the rand versus the dollar jumped to 20.3% from around 17.8% in the previous month.

A currency’s volatility is part and parcel of finding the right price of the currency on an ongoing basis, as buyers and sellers of the currency react to news about the country or global conditions. Very high volatility – ‘excess’ volatility – can cause uncertainty about the future path of the exchange rate and thus contribute to reduced investment activity (affecting the establishment of new companies, new factories, etc.). This would adversely affect growth and job creation (Aghion et al. 2009; Grier & Grier 2006).

What are the possible drivers of the South African rand volatility?

For South Africa, a number of researchers have investigated possible drivers of rand volatility. Most of the studies look at a single possible driver of volatility (for example, Fedderke & Flamand 2005; Arezki et al. 2012). Our recent study (Mavee, Perrelli & Schimmelpfennig 2016) combines a range of different drivers of volatility into a statistical model (a linear regression model) to assess the impact of these variables on daily rand volatility since the onset of the global financial crisis.

We looked at three groups of factors that are commonly considered in the literature:

We estimated a series of linear regression models, adding one explanatory variable at a time, ending with a model which combines all variables in one regression – aiming to see which factors contribute significantly to explaining the rand’s volatility (see Mavee, Perelli and Schimmelpfennig, 2016).

The results show, first, that the rand’s volatility is mainly[2] explained by global factors in the form of commody-price volatility and financial-market risk perceptions. In essence, increased volatility in the prices of South Africa’s main exported and imported commodities and increased global volatility are associated with increased rand volatility.

We set out to learn more about what drives abrupt and, at times, large changes in the rand/US dollar exchange rate — in other words, the volatility of the rand. With the help of statistical techniques, we explored which of the drivers of exchange-rate volatility that are proposed in the economics literature mattered for South Africa. Mostly in line with this literature, we found that macroeconomic surprises in South Africa (when data are released that are markedly better or worse than expected) play little role in driving the rand’s volatility. Instead, global economic factors — in particular, volatility in the prices of South Africa’s main exported and imported commodities, unexpected economic developments in the United States, and global perceptions of financial market risk — have a large impact on the rand’s volatility. In addition, local political uncertainty emerges as a significant driver of the currency’s volatility.

What do these findings mean for the question of whether there is a policy role to reduce excess exchange-rate volatility? South Africa cannot control commodity-price volatility, global financial-market volatility, nor economic surprises originating outside its borders. However, the government can influence the perception of political uncertainty. It does so in the way it develops and implements economic policy, as well as in the way it communicates decisions concerning economic policy. More policy and political predictability could thus help to smooth the rand’s volatility.

Duncan AS & Liu G. (2009). Modelling South African currency crises as structural changes in the volatility of the rand. South African Journal of Economics 77: 363-379.

[1] This index is calculated as a 3-month moving average of the difference between the Bloomberg market-consensus expectation and actual values for a list of key macroeconomic variables in South Africa and abroad.

[2] Our empirical study did not explicitly allow us to make assertions regarding the relative contributions of the different explanatory variables in explaining the rand’s volatility. Nevertheless, looking at the coefficient of variation from each regression, we get the sense that global factors explain the bulk of rand volatility; this is followed by a much smaller, though significant, explanatory power from local political uncertainty and macroeconomic surprises originating from the US (Mavee, Perrelli & Schimmelpfennig 2016).